If today’s newborn babies reach the age of 80, they will live to see the dawn of the 22nd century. They will also probably experience a rapidly warming world with associated extreme weather. Average global temperatures will be 2.5°C hotter than pre-industrial levels by 2100 and floods, heatwaves, droughts, and violent storms will be much more common than today.

This was the finding of a new United Nations report ahead of COP27, its annual climate change conference that took place in Egypt this year. It modelled the current commitments of the 193 governments that are signatories to the Paris Agreement and found that the goal of limiting global warming to 1.5 oC above pre-industrial levels by 2100 is still out of reach.

Reducing the greenhouse emissions that cause global warming, particularly carbon dioxide, requires restructuring large parts of the global economy. This is already largely feasible from a technological point of view, and indeed technology continues to advance rapidly. Green sources of energy and transportation exist, as do greener ways of building.

Who should pay for what is a very different question, as is who should make which sacrifices? For instance, stopping deforestation and reforesting denuded areas is mostly not a technical problem, but a socio-political one.

Answering these “how” questions have always been difficult, but the complexity has increased substantially in recent years. The world’s largest two emitters are China and the US, and climate progress requires their close cooperation. However, the relationship between the two is rapidly deteriorating.

Moreover, internal US politics is also deeply divided, and while the Biden administration is committed to tackling climate change and has put real money behind the cause, the climate-sceptic Republican Party is on track to retake the House of Representatives and may well claim the White House in 2024. Other big emitters like India, Australia, Canada, and even South Africa, also have strong fossil fuel lobbies that influence national politics.

But perhaps the biggest complicating factor has been the Russian war on Ukraine, which has played havoc with energy systems.

Russia is a major producer of natural gas, oil and coal, and has been chocking off gas flows to Europe, while sanctions have limited supplies of the latter two. The result has been a surge in prices, but also the realisation that underinvestment in energy security has left many economies dangerously exposed.

There has been a lot of investment in renewable energy, but it is coming off a low base and is still insufficient for the world to do without fossil fuels. For instance, the WEF estimates a record 10 million electric vehicles will be sold this year, but more than 50 million internal combustion engine cars will also be sold. Therefore, it seems likely that there will be a long transition period in which renewable energy and electric vehicles will grow market share but fossil fuels remain important. Since many banks and investors are cutting off capital to new sources of oil, we may well find that underinvestment continues leading to sustained high prices or at least volatile prices.

This is not a bad thing from a climate point of view, as high prices will lower demand and encourage alternatives. It is for this reason that economists have long argued that carbon taxes are the best way to fight climate change. However, over the past year politicians have gone to great lengths to shield consumers from higher fuel and electricity prices after the Russian invasion. It will take political courage to accept high prices and let them do their work.

The US released millions of barrels of oil from its strategic reserve, while governments in Europe have capped electricity prices. And instead of moving away from coal as many countries planned, coal demand has hit an all-time high in 2022 according to the IEA as unaffordable gas prices forced substitution, even in a country like Germany where the Green Party is part of the coalition government.

Canary in the coal mine

Most coal use is in the developing world, however, with China accounting for half of the total, while India is the number two coal consumer. While China’s economy is sputtering, impacting its electricity demand, India’s economy is growing rapidly and coal consumption is posting double digit growth, according to the IEA.

This is where the notion of a Just Transition comes in.

While countries like China and India are large polluters, on a per person basis, emissions are low because energy use rises with income. A big house with air conditioners and geysers requires much more electricity and therefore generates more emissions than a shack with a paraffin stove. Therefore, justice demands that the burden of adjusting to a future of net zero carbon emissions should be shared fairly and not fall on the poor nor should it fall on workers in fossil fuel industries.

At the level of countries, fairness demands that the burden of adjustment should not fall on poorer countries when rich countries used dirty energy to grow rich and are the biggest sources of per capita carbon emissions today. They can also absorb the costs of transitioning more easily, as well as the impact of extreme weather.

The chart below gives some context on carbon emissions. While China, India and Indonesia are among the biggest polluters today, their large populations mean per capita emissions are quite low. The US, Canada, Russia and Korea are high both in absolute and per person terms.

For South Africa, there is a chance to kill two birds with one stone, to use a very environmentally unfriendly expression.

South Africa is the 13th highest carbon emitter, sitting between Mexico and Brazil. However, South Africa’s per person emissions are closer to Germany or Japan. This is mainly because of its reliance on coal for 80% of electricity generation, but also because Sasol runs the world’s largest coal-to-liquids facilities.

But South Africa is also desperately short of electricity. Load shedding has been off the charts this year as Eskom’s old coal-fired plants break down with increasing frequency while the new mega-plants – Kusile and Medupi are among the world’s five largest – suffer from design and construction faults that means they may as well be decades old. A lack of reliable electricity supply is the number one headwind for economic growth and has been for the past several years. 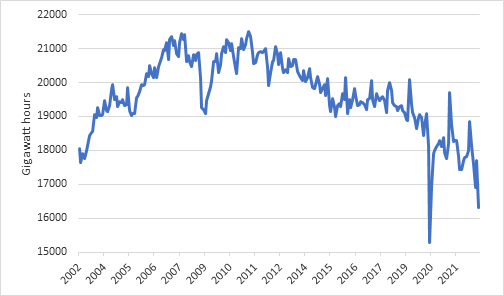 Irrespective of your views on climate change, renewable energy is the cheapest and quickest way to plug these gaps. The recent regulatory changes that allow for private companies to generate their own power are already delivering encouraging progress. South Africa has excellent wind and solar resources, among the best in the world. A rapid build-out of renewable energy sources, therefore means we can lower our carbon emissions and support economic growth.

Moreover, coming off a high base, it is cheaper for South Africa to reduce its carbon emissions than it is for, say France or Germany. Therefore, it makes sense for rich countries to pay South Africa to cut emissions. That is exactly the thinking behind the Just Energy Transition Partnership (JETP) that was formally announced at COP27 after a year of gruelling negotiations.

In fact, it might be the only success story of COP27.

Several rich countries will provide South Africa with $8.5 billion over five years, mostly in the form of cheap loans, largely to decommission coal-fired plants and replace them with renewable power sources. There will also be funding to strengthen the grid (the Northern Cape has the best solar potential but has limited grid connections), support electric vehicle manufacturing, and develop a green hydrogen sector.

Separately, but certainly related, the World Bank has provided $490 million to turn Komati, the 60-year-old decommissioned coal plant, into a solar and wind plant. These are big amounts, but not nearly big enough. South Africa’s Just Energy Transition Investment Plan (which gives effect to the JETP but adds another confusing acronym to an already crowded field) envisages that the transition will cost R1.5 trillion in total. But these are important early steps to start crowding in private investments.

There is no question that the transition here and abroad will require substantial funding from banks, pension funds, asset managers and other private actors. Yet the past year has also seen a backlash against the superficial application of environmental, social and governance (ESG) principles in investing.

This is not because there is anything inherently wrong with ESG – indeed the world needs more focus on these issues, not less – but because many reduced ESG to a tick-box exercise without fully grappling with the complexities and necessary trade-offs.

Even worse, it became reduced to a sales tool, empty rhetoric, and greenwashing.

The ESG sales pitch worked well when “cleaner” technology shares were vastly outperforming “dirty” energy and materials companies in the decade before 2021 and it could be argued that environmentally friendly investments equalled excess returns. But over the past two years, oil major ExxonMobil outperformed Meta (formerly Facebook) by 250%-points while Sasol has beaten Naspers by a similar amount on the JSE.

Investors who want to do what is right for future generations should be prepared to sacrifice some returns if necessary, but also engage meaningfully with the issues at hand.

This might mean, for instance, accepting that there is a coal miner in your portfolio, but then also ensuring that the mine has only a finite lifespan, is run transparently and will eventually be shut and rehabilitated in a way that is responsible to nature and the surrounding communities. Selling the mine into opaque private ownership may “clean up” your portfolio but does not change the actual reality. 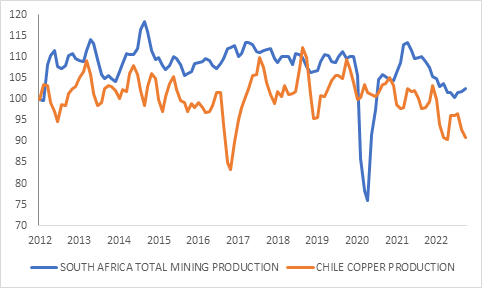 Opportunities amid the risks

With all this comes investment opportunities. Many trillions of dollars will have to be spent globally on clean energy sources, expanding electrical grids, electrifying transport networks, and refitting buildings to reduce carbon emissions. Many trillions more will have to be spent on strengthening cities, farms, industries, and supply chains in the face of extreme weather.

Much of this will be physical investments, requiring raw materials. Copper for electrical wiring is absolutely critical, but so are the battery metals (lithium, nickel, cobalt, and manganese). It will also require lots of steel and cement, and unfortunately, both are currently made using carbon-intensive processes. Platinum is used to produce green hydrogen, touted by many as the clean fuel of the future.

Many of these commodities face supply constraints, however. Take Chile, for instance. The world’s number one copper producer has seen supply decline over the last five years. Neighbouring Peru, the number two producer, saw output jump mid-decade, but there has been meaningful growth since.

South Africa’s overall mining output tells a similarly sad tale of practical constraints and policy shortcomings. It is flat as a pancake over the past decade 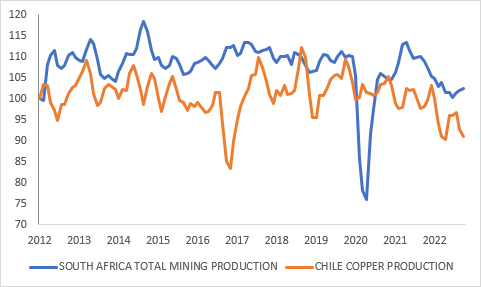 As the world economy slows under the weight of decades-high inflation and surging interest rates in the coming months, it is no surprise that commodity prices are under pressure.

However, the longer-term outlook is positive, and this is good news for a resource-rich economy like South Africa. We have a lot of work to do to make sure the country can exploit these opportunities, and even more work to do to build resilience as a future with wild weather looms.