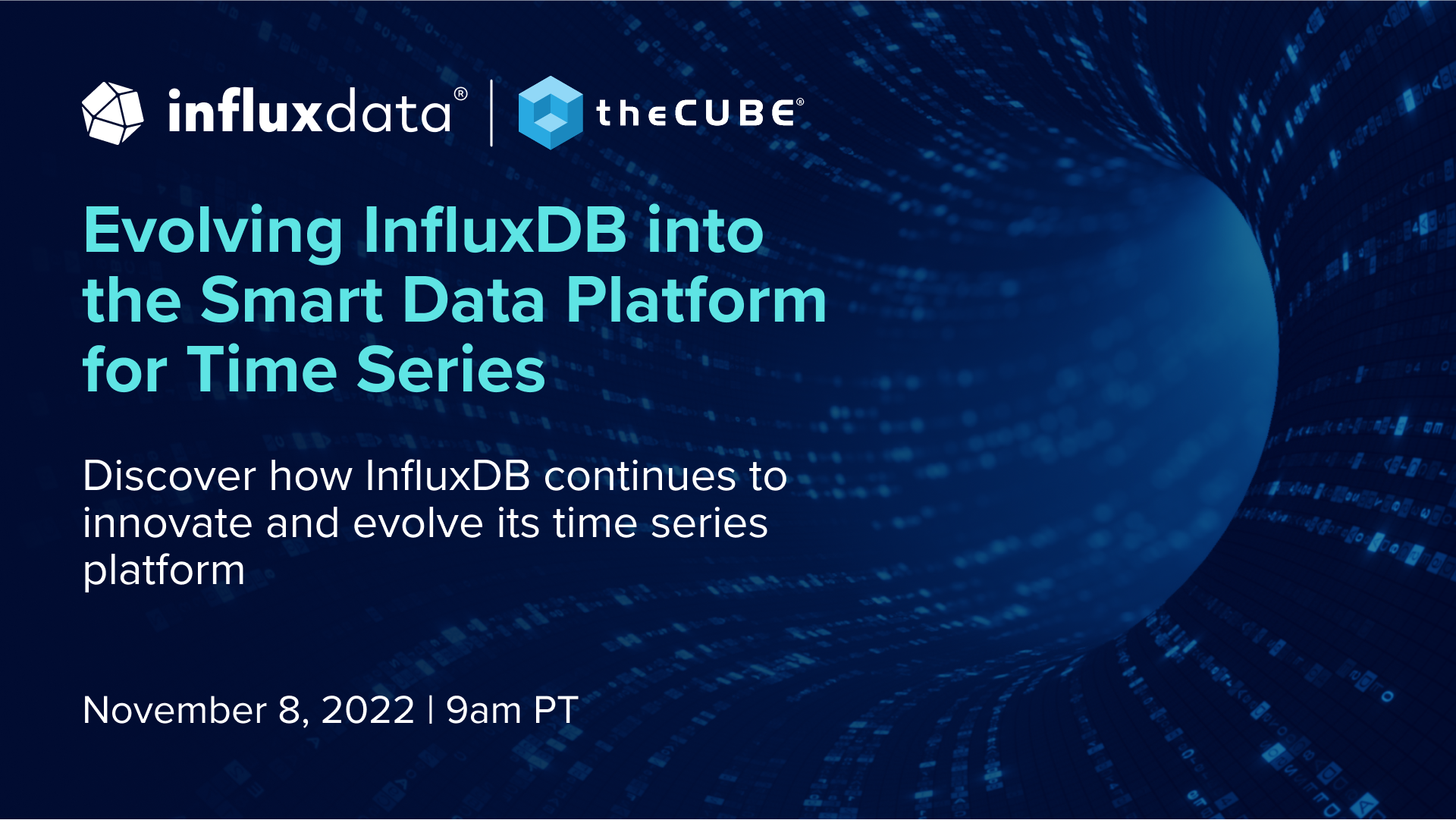 But we’re at an inflection point, one that demands the innovation of existing TSDB technology to support new workloads and demanding use cases. But in what specific ways are those advancements poised to happen?

“In this program, we’re going to dig pretty deep into what’s happening with time series data generally and specifically how InfluxDB is evolving to support new workloads and demands and data — and specifically around data analytics use cases in real time,” said theCUBE analyst Dave Vellante.

On Nov. 8, theCUBE, SiliconANGLE Media’s livestreaming studio, will be live at the “Evolving InfluxDB Into the Smart Data Platform for Time Series” event, interviewing experts from within and outside InfluxData Inc. on several of the innovations happening in time series databases. (* Disclosure below.)

The open-source InfluxDB platform was created by InfluxData as a purpose-built tool to handle massive time-stamped data volumes as typical to networks, containers and IoT devices. It’s equipped to handle tasks such as app metrics, operations monitoring and real-time analytics. The database platform has made concerted efforts toward adopting the “smart data” ideology through several feature additions, one of which streamlines and expedites data pipeline creation for users.

The “InfluxDB Native Collectors” feature allows the collection, processing and storage of time-series data to be faster in the InfluxDB Cloud. Since time-series data can (and often) comes from a multitude of different sources, it must be consolidated into a single, central location. As creating pipelines from these different sources is complex, Native Collectors automates the pipeline creation process and negates an intermediary layer, giving cloud-based data sources a direct channel to InfluxDB Cloud.

“We’re going to talk about the continued evolution of InfluxDB and the new capabilities enabled by open source, generally, and specific tools,” Vellante explained. “You’re going to hear a lot about things like rust implementation of Apache Arrow and tooling such as Data Fusion, which are powering a new engine for InfluxDB.”

With around $120M raised in the company’s four funding rounds so far, InfluxData is working to elevate its TSDB platform to become one of the go-to’s for spaces such as DevOps observability and IoT analytics. In the company’s most recent funding round in 2019, it announced that the $60M investment raised would go toward product innovation and building out the platform, especially in relation to the cloud.

In June, the company consolidated efforts in innovating for the network edge by announcing Edge Data Replication, a capability allowing the database to further centralize business intelligence with data from edge computing environments.

Just as important is InfluxDB’s commitment to supporting the IoT, cloud applications and analytics spaces. This culminated in InfluxDB on the Road, an initiative that educates and enables developers to be successful in building applications with time-series data.

Don’t miss theCUBE’s coverage of the “Evolving InfluxDB into the Smart Data Platform for Time Series” event on Nov. 8. Plus, you can watch theCUBE’s event coverage on-demand after the live event.

How to watch theCUBE interviews

We offer you various ways to watch theCUBE’s coverage of the “Evolving InfluxDB into the Smart Data Platform for Time Series” event, including theCUBE’s dedicated website and YouTube channel. You can also get all the coverage from this year’s events on SiliconANGLE.

SiliconANGLE also has podcasts available of archived interview sessions, available on iTunes, Stitcher and Spotify, which you can enjoy while on the go.

(* Disclosure: TheCUBE is a paid media partner for the “Evolving InfluxDB Into the Smart Data Platform for Time Series” event. Neither InfluxData Inc., the sponsor of theCUBE’s event coverage, nor other sponsors have editorial control over content on theCUBE or SiliconANGLE.)