For the world economy, 2022 has been a terrible year. The combined hits from Russia’s invasion of Ukraine, China’s Covid-19 lockdowns and property correction, and amped-up Federal Reserve tightening will take global growth for the year down to 3.1%, way below expectations of a recovery-boosted 4.7% at the start of the year.

Bloomberg Economics’ base case for global growth in 2023 is 2.4%. A deeper energy crunch in Europe, an earlier and more painful recession in the US, or more pandemic restrictions and an uncontrolled slide in real estate in China could conspire to make even that uninspiring number unattainable.

Drawing on scenarios from Bloomberg Economics’ country teams and using a suite of models to calculate spillovers between countries, we estimate that in a downside scenario global growth in 2023 could slide to -0.5%. Taken with the weak number for 2022, that would shave more than $5 trillion off global income relative to expectations at the start of this year. It is, of course, not a surprise that an exercise aimed at estimating a global downside scenario should arrive at a big negative number. Still, our analysis flags how easily the outcome for the year ahead could slip below already-lackluster expectations, as well as the extremity of the impact if negative shocks collide and compound.

In the US, our base case is that the labor market has sufficient strength and households sufficient spending power to keep growth going until the second half of 2023. That puts growth in 2022 at 1.8% and 2023 at 0.7%. It could be worse. If a sharp housing market correction—with knock-on effects on the financial system—pulls the recession forward into 2022, that would subtract substantially from growth.

In the euro area, we assume that a seasonally cold winter, gas sharing across countries, and significant support for business and households will allow the economy to get through the energy crisis with only a shallow recession. Our baseline forecast is for growth in 2022 of 3.1% and 2023 of -0.1%. Exceptionally freezing temperatures and severe policy failures could subtract 0.8 percentage point this year and 3.3 percentage points next—tipping the block into a deep downturn.

In China, our baseline forecast assumes the government manages a smooth exit from Covid Zero and dodges a catastrophic real estate collapse. That puts growth at 3.2% in 2022 and 5.7% in 2023—with the end of Covid-19 controls contributing a one-time boost to the 2023 number. Things could easily go off track. More lockdowns in major cities, or a bigger-than-expected drag from property, could subtract 3.5 percentage points from 2023 growth.

Considered in isolation, those shocks would already be bad enough. When major economies stumble, though, the impacts are not confined within their borders. Trade, financial, and commodity price spillovers all mean that shocks in the US, euro area, and China ripple around the world. For many emerging markets—which invoice their exports and meet their financing needs in dollars—risk-off appreciation of the US currency adds to the stress. 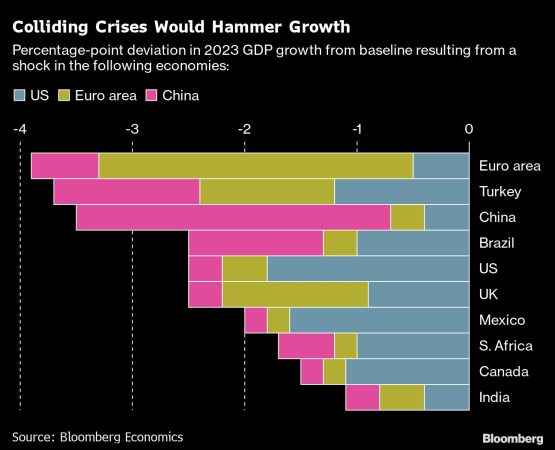 Drawing on a suite of macro models, Bloomberg Economics has estimated the aggregate impact if everything goes wrong at the same time. Unsurprisingly, the results aren’t pretty.

For the US, the combination of the domestic hit from Fed tightening and spillovers from a deeper European recession and sharper Chinese downturn take 2023 growth down to -1.8%. In the euro area, 2023 gross domestic product contracts by 4.1%. For China, hopes for a bounce back in the year ahead are frustrated, with GDP rising just 2.1%.

Our models also enable us to estimate the impacts on major emerging markets, including the drag from a stronger US dollar. Turkey and Brazil show up as having the most to lose.

The silver lining from weaker growth should be lower inflation, and that’s what our model suggests. For the US, for example, the results show inflation lower by 0.7 percentage point at the end of 2023, enough to take several Fed rate hikes off the table. Unfortunately, it’s not that simple.

With the downside scenario for Europe assuming even higher energy prices, the overall impact could actually be lower growth and higher inflation.

It is, of course, also possible to construct an upside scenario. An end to conflict in Ukraine or an unusually warm winter could spare Europe from recession. China might exit Covid lockdowns earlier or add more stimulus to offset the property slide than we expect. US labor markets might deliver the immaculate disinflation that the Fed is hoping for. Some combination of those positive surprises might cheer markets and lift global growth for the year above expectations.

Still, the base case is for 2023 to be a year of lackluster growth and still-high price pressure. And the lesson of the last few years is that things can always get worse.

The advantage of this model is that it jointly models trade and financial channels and incorporates the dominant currency paradigm and the financial channel of the exchange rate. As a cross-check, we also run alternative scenarios with the SIGMA model of the Federal Reserve Board.

Spillovers to all other countries were estimated by using small structural (Bayesian) vector autoregressive models. We run conditional forecasts on the adverse growth paths of the US, euro area, and China.

• In the VAR models, the US, euro area, and China are assumed to be block exogenous to the individual countries.
• Spillovers are based on an historical relationship between the big blocks and the shock recipient countries.
• For all countries, we use standard Minnesota priors with four lags on quarterly data from 2001-2022, excluding the Covid period from the sample.