Emerging market (EM) central banks are becoming increasingly sensitive to currency depreciation and several have sold down a significant portion of their foreign exchange (FX) reserves to slow the pace of decline.

Most EMs have sufficient reserves to avoid old fashioned crises, but additional pressure on currencies could see some take more aggressive action to prevent further depreciation.

Swap lines and interest rate hikes are the most likely course of action; however, some could consider capital controls if the US dollar continues to march higher.

South Africa finds itself in a position of relative strength. While the rand is clearly not immune to a generally stronger US dollar, SA’s relatively solid fundamentals mean further currency depreciation is unlikely to cause policymakers to panic.

The balance of payments is in good shape, South Africa has been one of the few EMs to accumulate FX reserves over the past year, and the market already prices in a positive real interest rate.

Indeed, these factors are likely to attract investors once the global backdrop stabilises.

The resilience of EM currencies has often been overlooked during the current market chaos.

While the US dollar index (DXY) has appreciated by about 25% since mid-2021, EM currencies which are not included in DXY have generally fared less badly.

Indeed, some – such as the Brazilian real – have eked out positive total returns against the dollar supported by a combination of large interest rate differentials, cheap valuations, light positioning and positive terms of trade shocks.

However, foreign exchange liquidity – particularly of US dollars – is clearly being squeezed as aggressive interest rate hikes in developed markets, deteriorating demand for EM exports and risk-off sentiment have driven capital outflows.

In particular, central banks in the Czech Republic, Chile and Thailand have seen their reserves fall by a fifth since the US dollar started to surge. 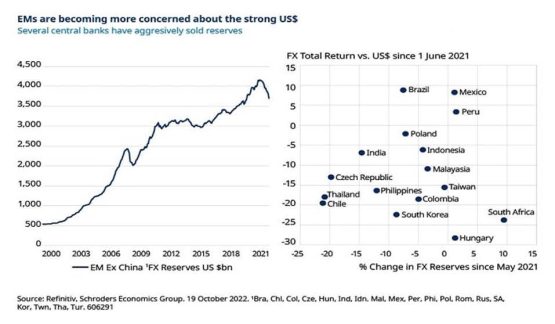 Source: Schroders (and as indicated)

To be fair, this is exactly why FX reserves are held.

They are accumulated during the good times in order to be used during tougher times. And it is worth noting that the fall in reserves has been exaggerated by a decline in the value of underlying reserve assets as developed market fixed income has sold off.

Indeed, some estimates suggest that rising bond yields (and declining prices) has accounted for over half of the decline in EM FX reserves.

Intervening in the foreign exchange market by selling down reserves can help to avoid the kind of knee-jerk moves that tend to unsettle confidence in a country’s currency.

And having a large pot of reserves allows central banks to intervene for longer and more aggressively.

However, while selling down reserves can help to smooth exchange rate adjustments, the policy rarely changes the direction of travel altogether.

FX reserves are not a bottomless pit, meaning that while most EMs have plenty of assets to avoid an old fashioned balance of payments crisis, at some point direct intervention in currency markets becomes unsustainable if reserves become insufficient to cover external obligations.

Accordingly, further capital outflows and pressure on currencies is likely to force EM central banks to look for alternative ways to support their currencies and prevent financial market dislocation that would hurt the domestic economy.

The first is to secure foreign exchange swap lines. These have historically been set up with the International Monetary Fund (IMF), and several EMs such as Mexico have had arrangements such as flexible credit lines in place for some time. This allows the central bank to top up reserves if needed during times of stress.

The Federal Reserve has also become more proactive in setting up swap lines with EMs during the pandemic era to avoid stress in the US Treasury market given that a fire sale of reserve assets puts upward pressure on yields.

There have been rumours that South Korea has sought to access a new swap line and others with large holdings of treasuries could make arrangements.

Such swap lines can boost confidence in the convertibility of a country’s currency, although in isolation are unlikely to prevent further currency depreciation.

A second option for EM central banks looking for a more immediate way to arrest currency depreciation is to deliver additional interest rate hikes. The hope is that by making investing in the local currency more attractive, capital outflows will ease and some inflows will return.

The National Bank of Hungary (NBH) blinked last week when it announced a raft of measures to support the Hungarian forint, including large increases in some of its interest rates. While the NBH did not raise its official policy rates, it did aggressively hike other rates with the apparent aim of draining local liquidity, in the process driving up market interest rates.

In many respects, Hungary was an obvious candidate for ’emergency’ rate hikes.

It has relatively low FX reserves, and a fragile balance of payments position where its current account deficit is funded by short-term capital inflows. Additionally, market pricing of rates is dovish, which on a forward-looking basis is expected to remain low in real terms. Source: Schroders (and as indicated)

According to this approach, several other EM central banks – largely in other parts of Central Eastern Europe and Asia – may need to deliver significant interest rate hikes. These are required in addition to those already priced into the market. These markets warrant an underweight in local fixed income.

The third option for EM central banks under severe pressure would be to impose capital controls.

The ‘impossible trinity’ says that countries cannot have all three of a fixed (or managed) exchange rate, sovereign monetary policy and free movement of capital.

On this basis, if central banks are unwilling to aggressively raise interest rates – or even seek to loosen policy owing to weak domestic activity – capital controls could come onto the agenda.

Some EMs already have capital controls in place for this exact reason, notably China and others such as Turkey could follow suit in the event of more severe outflows.

Capital controls are no longer taboo and the IMF now believes they are warranted in some cases.

However, this is the last resort for EM central banks given the long-term damage caused to credibility and are unlikely to be used widely.