Investing in the wellness, training and safety of correctional officers is key to transforming the “broken” U.S. corrections system, according to a Blue Ribbon Commission of senior corrections staff, advocates, and representatives of incarcerated individuals.

In a report released this week, the commission called attention to what it said was a “wellness crisis” among corrections professionals across the country, which had contributed to a life expectancy of 59 years (compared to 75 years for the average American), and disturbingly high 34 percent incidence of post-traumatic stress disorder among serving officers. 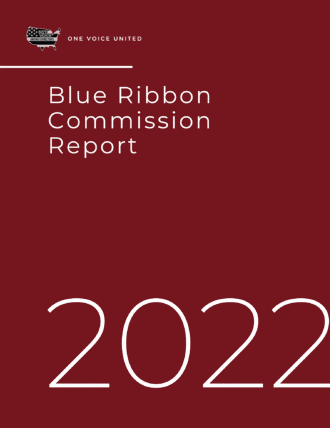 “An entire workforce [is] paying with their health and their lives, simply for an
opportunity to support their families and have a career,” said Julie James, vice president of criminal justice at Arnold Ventures and one of the 13 people serving on the commission.

“This workforce is meant to support the rehabilitation of those who are incarcerated. Yet they are in no position to help others heal. They are enduring a mass trauma of their own.”

The Commission was organized by One Voice United  (OVU),  a professional association comprising former and current corrections officers that advocates for better working conditions as well as reform of the carceral system.

The report was based on a forum convened by OVU in Washington DC last May, which brought together advocates, researchers, formerly incarcerated individuals and their families, and former and serving correctional staff.

Noting that the crisis “has largely gone unnoticed outside the four walls” of correctional institutions, the commission issued a series of recommendations to policymakers that linked prison reform to fundamental changes in how correctional staff were hired, trained and supported on the job.

“Investments in officer wellness, training, continuing education, and career advancement all have the potential to lead to breakthroughs in transforming the nature of incarceration,” the commission said.

“Rather than viewing these expenditures as being at odds with reform efforts, they should be pursued in tandem.”

In testimony before the commission, one of the most striking points made by speakers was that  that corrections staff and prisoners suffer similar trauma from an unhealthy environment.

This can be directly, in your face, when you witness it with your own eyes or hear it with your own ears, in real time, like when you see somebody else getting affected, whether an incarcerated person or a coworker is being attacked or is dying of natural causes in front of you, whatever it might be.

Or when you get assaulted yourself.

We forget that if staff are not safe and feel safe and feel taken care of, they are not going to be delivering what you want them to deliver. There is no way, no way, that the mission of an agency for rehabilitation will be accomplished with impaired, broken down, exhausted, freaked out, paranoid, reactive staff.

The vivid testimonials of corrections staff to the commission were also striking in a culture that is often secretive and closed to outsiders.

“I’ve been fired, suspended, assaulted, gassed, tased; intervened in fights, stabbings, riots. I’ve seen the loss of life. I almost lost my wife, my family and myself,” said Stephen Walker, who retired after 35 years as a corrections officer.

“As officers, we are trained very well to do the job,” added William Young, a 17-year veteran of corrections and the author of two books.  “We are shown how to handle the seizures and the stabbings and the searches. We are taught CPR/First Aid, tactical handcuffing, and Verbal Judo.

“We are shown where to stand when we’re speaking with an inmate and how to extinguish a fire by pulling, aiming, squeezing, and sweeping. But where we lack as a profession, is providing information and resources to staff about the emotional impact that responding to a medical emergency or a severe assault or an attempted or completed suicide can have on an officer.”

Most corrections officers are poorly prepared to deal with the new approaches to incarceration advocated by researchers, academic and even wardens, Young acknowledged.

‘The Job Has Changed’

“The job has changed from 20 years ago, when we would just lock people up, throw them in a cell and just let them be. Now, it’s rehabilitation, it’s reintegration, it’s acclimation to society,” he said.

“The problem is we haven’t changed the training of the officers. I’m still taught to do the job the way I was taught 20 years ago.”

The Commission recommended developing a training model that placed as much emphasis on counseling and mental health needs as on physical custody and protection.

“By investing in increased training and specialization, officers will have an enhanced capacity for ensuring the betterment of the people under their supervision and the national workforce will be better equipped to meet the growing demands of modern-day corrections,” the commission said.

“Although attention to physical self- defense is an important component of training for officers and staff, far too little attention is paid to the need for emotional intelligence training, mental health awareness and practices, the art of de-escalation and transformational leadership.”

Many took note of the intervention from a Norwegian corrections official, Tor Erik Larsen, who described a complex training regimen that involved a period of mentorship with a senior officers, and lectures on the sources of criminal behavior—with the aim of developing corrections work as a profession.

“We taught our new officers about these people that are in prisons, what type of people they are. We gave them tools for how to approach them and talk to them,” he said.  “You’re kind of eased into the profession, and in the recruitment, as you now do it as part of a degree. So once you’ve finished the Academy and worked for a year or two, then you can apply to take the bachelor’s degree.”

Larsen, as well as American corrections experts said the Scandinavian system was not replicable in a larger and more complicated U.S. prison environment.

But most agreed that little would change unless policymakers were willing to rethink the nature of prisons themselves.

“Until we transform prisons from human warehouses to places of accountability and  rehabilitation, I’m afraid we’re going to continue the insanity going forward.”