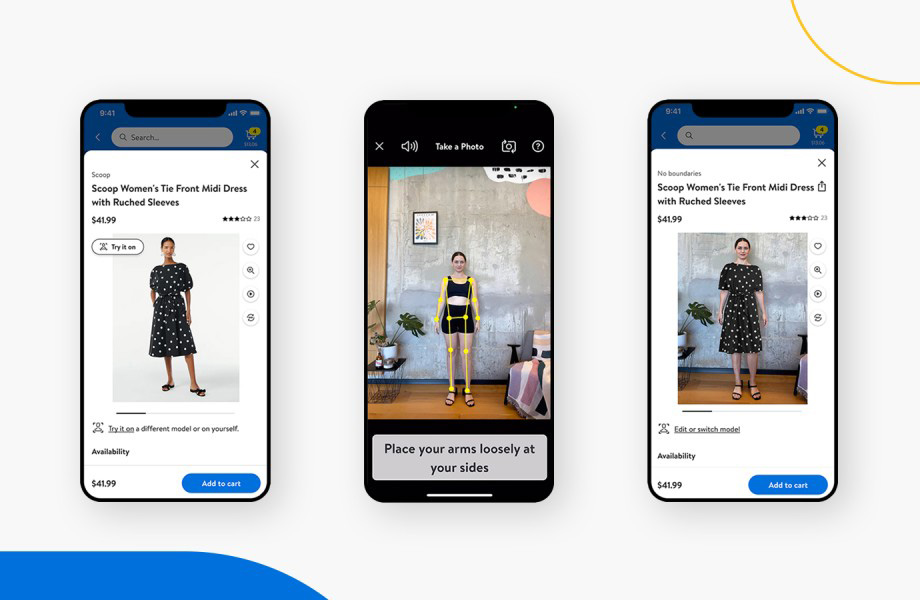 Walmart Inc. is expanding its lineup of digital tools for customers to see what clothing will look like before they buy them.

Today, the retail giant unveiled a virtual try-on option called “Be Your Own Model” that uses augmented reality and artificial intelligence to give customers an ultra-realistic simulation of what clothing will look like with them wearing it based on a photo of themselves.

All it takes is a device an iOS-enabled device and the Walmart app and it will work for any item in the Walmart catalog that is enabled for virtual try-on.

Starting this week, customers will be able to test out what a shirt, dress, pants or blouse looks like on their own bodies as simple as taking a picture of themselves and telling the app how tall they are. From there the app uses artificial intelligence to form a “topographical map” of their body and then a neural network uses that to create a realistic image of how the fabric would follow the curves of their features.

“These features work together to create a unique experience that is incredibly simple for our customers to use, and it will be available at an unprecedented size and scale, with more than 270,000 items,” said Cheryl Ainoa, senior vice president of new businesses and emerging tech at Walmart Global Tech.

The use of augmented reality with machine learning means that customers get a virtual fitting room experience with the clothing way beyond just a flat photo of the apparel. The key difference is the accuracy between the customer and what they see by using augmented reality and machine learning to provide an ultra-realistic experience so that they know what they’re going to buy.

“Other experiences typically lay a photo of an item on top of another image, making it appear computer-generated,” said Ainoa. “With Be Your Own Model, a customer sees an ultra-realistic simulation with shadows, fabric draping and where clothing falls on their figure in seconds.”

For example, a single shirt or blouse could have three different colors, two variations in patterns and two different sleeve lengths. This new technology could be used by the customer to capture exactly how that would look on their own body.

This feature expansion is part of Walmart’s 2021 acquisition of Zeekit, a virtual fitting room platform, which the company used to create its first iteration of the app that allowed customers to pick from a selection of models who would show off virtual apparel.

Numerous high-quality brands have been added to the database that can be viewed in the app including Free Assembly, Scoop, Sophia Jeans, Love & Sports, ELOQUII Elements, Time & Tru, Athletic Works, Terra & Sky, No Boundaries, Avia and The Pioneer Woman. Walmart is continuing to grow its selection with its own national brands as well including Campion, Levi’s and Hanes, and even items on the Walmart Marketplace.

Soon, iOS users will also be able to take their images from the Walmart app and use the feature for shopping on the desktop or web as well. Walmart also said that it will be launching the same feature for its Android app in the coming weeks.

Warby Paker, a maker of fashionable eyeglasses and sunglasses, explored AR for selling spectacles in 2019 by permitting users to see what frames would look like on their faces. Amazon has even jumped on the bandwagon with a virtual try-on for shoes, whereas the footwear brand Nike uses AR as a utility to help customers determine their shoe size.