It’s too soon to write off the dollar’s dominance as the US rate-hike cycle may not be near its peak.

That’s the firm conviction of money managers at JPMorgan Asset Management and Fivestar Asset Management even after a gauge of the greenback touched a one-month low on Thursday. Signs that aggressive Federal Reserve tightening is starting to take a toll are fueling bets for a slower pace of rate increases.

But dollar bulls remain undaunted: a hawkish Fed, fears of a global recession and heightened geopolitical tensions in Europe should only bolster demand for the US currency, investors say.

“At the moment it is difficult to see kind of what causes the dollar to weaken from here,” said Iain Stealey, international chief investment officer for fixed income at JPMorgan. “The Fed hasn’t hit the terminal rate yet, the US economy looks like it’s probably a bit more resilient than some other economies out there.” 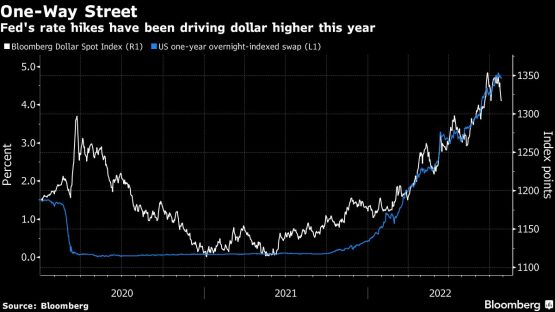 Investors are pondering the dollar’s direction after a smaller-than-expected rate increase by the Bank of Canada spurred speculation of a dovish pivot by other central banks. A four-month rally in the greenback has rippled across the globe as a host of currencies tumbled to multi-year lows while import costs in developing nations soared.

The US currency’s strength has prompted authorities to step in, with policy makers from Japan to Chile intervening to shield their currencies even though the measures have yielded limited results.

The dollar’s winning streak has encouraged the likes of Sumitomo Mitsui Trust Bank Ltd.’s Ayako Sera to argue that the currency’s strength may soon come to an end. “It will take some time to get confirmation as to whether the dollar has peaked but conditions have started to align for the dollar to top out,” she said.

The Bloomberg Dollar Spot Index rose 0.1% Thursday to head for its first gain in three sessions.

Other are less certain. While the greenback may consolidate ahead of the Fed’s policy meeting next week, “the fundamental backdrop for the dollar remains positive,” Win Thin, head of currency strategy at Brown Brothers Harriman & Co. in New York, wrote in a note.

Fed officials appear divided on the pace of further tightening. Philadelphia Fed President Patrick Harker said officials are likely to raise interest rates to “well above” 4% this year while his Chicago counterpart Charles Evans said overshooting can be costly “and there is great uncertainty about how restrictive policy must actually become.”

Fivestar Asset Management’s Hideo Shimomura is also not ready to call time on the greenback’s rally.

“I don’t think we have seen the turning point for the dollar,” said Shimomura, senior portfolio manager in Tokyo. “It won’t probably come until we have a clearer view on how far the Fed will raise rates.”