Cyril Ramaphosa fended off an impeachment inquiry and internal dissent in South Africa’s governing African National Congress to win re-election as its leader. Rebuilding support for the party ahead of a national vote scheduled for 2024 and tackling the nation’s multitude of socio-economic ills is likely to be even more arduous.

The ANC is “increasingly becoming unpopular” and Ramaphosa’s most difficult tasks will be to re-inspire confidence in himself and the party, and to win support for measures needed to turn the country around, said Thabi Leoka, a Johannesburg-based economist.

Political wrangling and instability has “muddied the vision” for Africa’s most industrialized economy and bred uncertainty, she said. “We just don’t know which turn or in what direction the leader is going to take us.”

These are some of the biggest economic challenges Ramaphosa will have to tackle: South Africa is mired in an energy crisis that Ramaphosa needs to address as a top priority. State power utility Eskom Holdings SOC Ltd., which produces more than 90% of the nation’s electricity, has struggled to meet demand from its old and poorly maintained plants. It has imposed rolling blackouts, known locally as load shedding, for a record 193 days so far in 2022 to prevent a collapse of the grid, Bloomberg calculations show.

The company doesn’t generate enough revenue to cover its operating costs and interest payments, and Ramaphosa’s administration has committed to transferring a portion of its debt to the state. The utility is also recruiting a new chief executive officer to replace Andre de Ruyter, who will vacate the post in March. Ramaphosa will face increasing pressure to fast-track reforms to bolster output in an economy that the central bank expects to grow less than 2% a year until at least 2025.

Though the economy’s been “remarkably resilient in the face of electricity constraints, high inflation, and political uncertainty,” a possible deterioration in global growth and the lagged impact interest-rate hikes are weighing on the outlook, said Carmen Nel, an economist and macroeconomic strategist at Matrix Fund Managers. 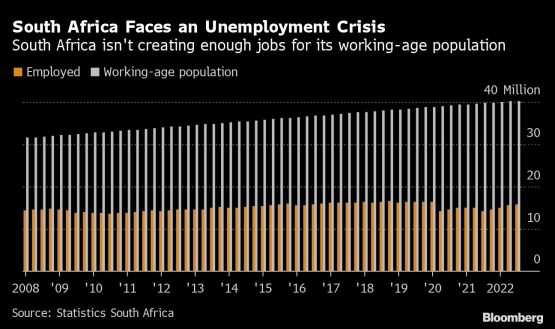 At 32.9%, South Africa’s official unemployment rate is the highest after Namibia and Nigeria on a list of 82 countries and the eurozone monitored by Bloomberg. The rate rises to 43.1% if those people who were available for work but not looking for a job are included.

Ramaphosa will have to improve business confidence and create an enabling environment for fixed investment that will foster job creation. A tough decision on the future of a temporary welfare grant, first introduced to cushion the poor against the fallout from the Covid-19 pandemic, needs to be made. About 7.4 million people out of a working-age population of 40 million currently receive the temporary monthly stipend of R350 ($20).

The so-called Social Relief of Distress grant is set to expire in March 2024, and the government is considering how best to continue supporting the vulnerable. Welfare recipients outnumber taxpayers and the National Treasury has warned that an indefinite extension of the stipend in its current form will threaten the sustainability of the public finances unless a permanent source of funding is found. Investors will be looking look to Ramaphosa to continue backing the National Treasury’s efforts to rein in debt and reduce budget deficits. Government forecasts show state debt will peak at 71.4% of GDP, but questions about relief for state companies, higher-than-budgeted pay demands by civil servants and the potential expansion of the social welfare net have clouded the outlook.

Fiscal prudence could end the downward trend in South Africa’s credit ratings and promote capital inflows. The country’s debt is assessed as sub-investment grade, or junk, by the world’s biggest ratings companies. Ramaphosa will be under pressure to intensify his drive to rebuild state institutions that were hollowed out during an era of rampant graft, known locally as state capture, during President Jacob Zuma’s nine-year rule.

A turnaround of the South African Revenue Service is probably Ramaphosa’s biggest success to date. The tax office under Edward Kieswetter has supported the state’s balance sheet by improving compliance and overshooting revenue-collection estimates. Efforts to bolster the capacity of law-enforcement agencies have also made some headway, and they have made several high-profile arrests.