US inflation probably moderated just slightly in October data due Thursday, and yet another above-forecast reading may dash expectations for the Federal Reserve to downshift from steep interest-rate hikes.

Economists project the consumer price index and the core measure that excludes food and energy both cooled on an annual basis, but to rates still consistent with persistent and elevated inflation. The overall CPI is seen rising from a month earlier by the most since June.

That’s keeping a fifth-straight 75 basis-point increase in interest rates on the table for the Fed’s meeting next month, though traders are leaning more toward a half point. Also, rising prices have pushed the Fed to eye a higher peak rate next year than officials were projecting a couple months ago.

Either way, a still-tight labour market underscores what’s likely to be a relatively slow decline in the coming months for inflation, which has been a major factor in this week’s midterm elections. The overall annual inflation rate exceeded forecasts in six of the prior seven months.

“An upside surprise would be more likely to be driven by underlying strength and together with the resilient jobs report would further raise the risk that policy rates will need to rise higher to quell inflation,” Citigroup Inc. economists Veronica Clark and Andrew Hollenhorst said in a note.

The Fed is on its most aggressive interest-rate hike campaign since the 1980s to rein in demand across the economy, including for labour. Chair Jerome Powell said last week that in order to stomp out inflation, the central bank wants to see softer job-market conditions, but so far that hasn’t happened yet in an “obvious” way.

Richmond Fed President Thomas Barkin said at an event Wednesday that the central bank will do what is necessary to get inflation back to its 2% goal.

“The Fed can’t let inflation fester and expectations rise,” said Barkin, who does not vote on monetary policy this year. “If we back off for fear of a downturn, inflation comes back even stronger and requires even more restraint.”

A report Friday showed that the US added more jobs than expected in October, and average hourly earnings accelerated from September. Even though pay gains aren’t keeping pace with inflation, they’re still helping give Americans the wherewithal to keep spending and boosting labour costs for businesses, which in turn is maintaining upward pressure on prices.

“If the labour market is surprising us with strength and resilience, then we shouldn’t anticipate a different outcome with consumer prices,” said Carl Riccadonna, chief US economist at BNP Paribas. “One is going to follow the other. Labour is slow to turn, and the same goes for inflation.”

While watching the subtleties of inflation reports, Fed officials are also worried about the impact big headline numbers are having on consumers’ wage and price expectations.

“They let the headline get away from them and they want to get the headline down to 2%,” said Lara Rhame, chief economist at FS Investments. “They are focusing on the top-line year-over-year calculation.”

The headline figure, which was up 8.2% in September from a year ago, reflects broad price pressures across the economy. In recent months, some of the biggest contributors have been food, medical care and shelter.

While some measures of home prices and rents have slowed or even declined in recent months, it takes awhile to be reflected in the CPI. Fed Governor Christopher Waller said last month that if housing prices continue to increase rapidly, other components in the core inflation basket “would need to moderate considerably” to provide the lower overall inflation readings Fed officials are seeking.

“Consumer-price inflation will slow on a year-over-year basis, but we don’t expect shorter-term run rates to converge to the Fed’s 2% target anytime soon…Signs of disinflation in the core-goods sector will be met with sturdy core services inflation, led by rents.”

One area where inflation is cooling is goods — such as cars and apparel — reflecting improved supply chains and shifting spending patterns toward services. But that moderation hasn’t nearly offset the price pressures emanating from services.

In the September CPI, core services that exclude energy climbed 6.7% from a year earlier in the biggest annual advance since 1982. The Institute for Supply Management’s October survey of manufacturers showed prices paid for materials contracted for the first time since 2020, while the group’s services report indicated costs accelerated. 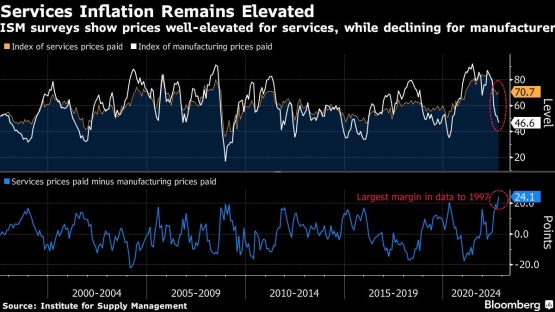 Thursday’s report may also show a reversal in the costs of health insurance, which has increased more than 2% on average this year, and the broader medical care services category, according to Omair Sharif, founder of Inflation Insights LLC.

The pandemic and subsequent recovery in the economy caused big swings in medical care services costs and are set to weigh on the CPI, according to Bloomberg economists. A further wrinkle is that the government will now include Medicare Part D premium and benefit expenditures in its retained earnings calculation.