Ukrainian President Volodymyr Zelenskiy said Russia must compensate his country for the destruction that has been wrought by the invasion. Almost eight months into Russia’s invasion, Ukrainians were warned of rolling blackouts because of damage to the country’s power infrastructure from missile attacks. Camping stoves, generators and winter underwear are in high demand. “Controlled limits” were placed on electricity consumption in Kyiv and several northern and central areas on Thursday.

The UK defense secretary said a Russian warplane in late September fired a missile “in the vicinity of” an unarmed Royal Air Force jet flying in international airspace over the Black Sea.

Weeks after Russia and Belarus announced the formation of a new joint force, and days after the force started to assemble in Belarus, Ukraine’s army faces rising military threats from the north. Russian servicemen, equipment and aircraft are flooding into Belarus.

Zelenskiy said in his Thursday evening address that the situation at the front remains difficult, especially in the vicinity of Donetsk, near Bakhmut and in some areas in the south. Russia launched three missiles, delivered 20 air strikes and used multiple-launch rocket systems (MLRS) as many as 10 times on Thursday, Ukraine’s General Staff said. Of 20 Iranian drones launched today, Ukrainian forces shot down 15. Iran has called claims it’s sending missiles to Russia “baseless.” Russia hit Mykolaiv and the surrounding region with C-300 missiles on Thursday morning, Kyrylo Tymoshenko, deputy head of the president’s office, said on Telegram.

Ukrainian President Volodymyr Zelenskiy vowed that Russia would pay for the devastation that it has caused in his country “with isolation, degradation and assets, of the state and of quasi private individuals linked to this Russian regime.”

“Russia is trying to demolish Ukrainian energy systems, to force our people suffer even more, but instead this only mobilizes the world community to provide us more help and to apply more pressure on the terrorist state,” Zelenskiy said in his nightly address on Thursday.

“All our expenditure for the protection of power blocks and the renovation of our infrastructure after Russian strikes will be compensated at the expense of Russia assets.”

The White House accused Tehran of sending trainers and technicians to Crimea to support Russian attacks on Ukraine with Iranian-made drones, and pledged to interrupt further Iranian aid for Russian forces.

John Kirby, a spokesman for the US National Security Council, said in a briefing for reporters, said that Iranian advisers are helping Russian pilots based in Crimea to operate the drones. Russian forces initially had trouble using Iranian drones, so the Islamic Republic “decided to move in some trainers and some technical support to help the Russians use them with better lethality,” Kirby added.

Zelenskiy Calls on EU to Ratchet Up Sanctions on Iran (9:14 p.m.)

The Ukrainian president told EU leaders that the bloc must impose additional sanctions on the Iranian regime for deliveries of single-use attack drones to Russia, which have been used to attack energy infrastructure and civilians across the country. The 27-member bloc backed sanctions on three Iranian individuals and one entity this week.

“It is good that the first step has already taken place,” Zelenskiy told leaders by video at a two-day summit. “New individual sanctions against Iranian figures and companies have been approved. But a few individuals and companies are not a responsibility yet. More systematic steps are needed.”

Ukrainian President Volodymyr Zelenskiy met Goldman Sachs Executive Vice-President John Rogers and President of Global Affairs and co-head of the Office of Applied Innovation Jared Cohen in Kyiv, according to his press office. The group discussed Goldman Sachs possibly helping attract investments for Ukraine, including cyberdefense and fighting against fakes.

“I highly appreciate when such people are not scared and come to Ukraine to support us,” Zelenskiy said. “And it is very important to share true information about the situation in Ukraine, Russia’s attacks and their consequences via smart people.”

Ukraine’s national grid operator Ukrenergo said it’s been forced to temporarily introduce “controlled limits of electricity consumption” after usage levels “rose sharply” at a time citizens have been asked to conserve as much as possible, according to a statement on its Telegram channel.

The limits are in place for Kyiv and its surrounding regions, as well as for  Kharkiv, Sumy, Chernihiv and Zhytomyr in the north, and the central regions of Poltava and Cherkasy.

Russian President Vladimir Putin on Thursday visited a training center for mobilized reservists, where he shot a sniper’s rifle several times, state television reported. Dressed in civilian clothes, Putin spoke with one of the reservists briefly and hugged him, the footage showed.

Putin last week said his recent order to call up 300,000 reservists for what he calls a “special operation” in Ukraine would wrap up soon and won’t be extended.

The order spurred an exodus of draft-age men from the country, hurting consumer confidence and business activity but would likely weigh on the economy for months to come, including by worsening an already-acute labor shortage.

Ukraine’s armed forces see a rising threat of a fresh new military offensive from the north, where Russian and Belarusian troops have assembled a “joint force,” spokesman Oleksiy Hromov said Thursday at a video briefing.

Increasingly bellicose rhetoric from Russian and Belarusian leadership has accompanied the deployment of forces in Belarus, which started last weekend, he said.

The offensive may be repositioned to the northwest part of the Belarus-Ukraine border — that is, closer to Poland — in a bid to cut the main logistical arteries supplying weapons to Ukraine from allies, Hromov said.

Movement of S-300 systems of the Belarusian Armed Forces on the territory of Belarus:

Turkey asked Russia to build its second nuclear power plant, in the latest sign of closer economic ties even as the US and its allies try to isolate the Kremlin for its invasion of Ukraine.

Turkey’s President Recep Tayyip Erdogan made the request in talks last week in Kazakhstan with Vladimir Putin, their fourth meeting in four months, according to people familiar with the situation.

Russia will lose its place on stage at an atomic energy summit in Washington next week, as US authorities seek ways to limit the influence of Kremlin-controlled nuclear fuel and technology suppliers on the global market.

The International Atomic Energy Agency confirmed that executives from Rosatom Corp. and Russia’s industry regulator were dropped from the agenda. White House officials have been considering for months ways to reduce the Kremlin’s influence on global nuclear markets. 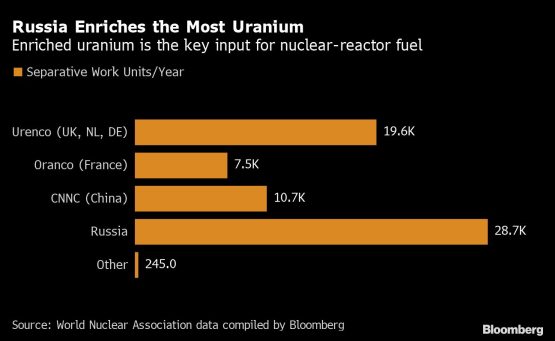 “The demand for electric generators rose fivefold, and the average check grew to 20,000 hryvnia ($541),” the retailer said in an emailed comment.

Gas cylinders, headlamps and camping stoves are also in demand, along with thermal underwear. In September, radiation meters and preventative medicine were the most-coveted items, Prom.ua said.

Estonia, Lithuania, Latvia and Poland proposed broadening EU sanctions on Russia by adding a ban on cooperating with Russia on nuclear energy, according to a document seen by Bloomberg News. The nations also want to ban the sale of real estate to Russian citizens and companies and limit the concessions that Belgium previously won on the import of steel products from Russia.

The ninth sanctions package should broaden the ban on information and communication technology services to include computer software and extend the scope of a ban on business services to cover marketing and opinion poll services, according to the document.

“Schemes involving marketing and leasing services are regularly used in Russia as a cover-up to facilitate flows of a large scale providing funds for military sector,” the countries said.

“The equipment will help to ensure uninterrupted functioning of Ukrainian households, hospitals and schools,” Dmytro Kuleba said in a statement.

Separately, on Twitter, Kuleba welcomed the EU’s moves against Iran for its provision of drones used by Russia in recent attacks on energy infrastructure and other targets.

I welcome the EU’s prompt action following my appeal on Monday to impose sanctions on Iran for helping Russia kill Ukrainians and damage our energy infrastructure. In three days, the EU agreed on a set of restrictions which will take effect as soon as today.

Billionaire Roman Abramovich was sanctioned, with the proviso that the measures only take effect after an exchange of prisoners and bodies of deceased soldiers between Ukraine and Russia is complete.

A Russian aircraft released a missile on Sept. 29 near an unarmed British plane patrolling in international airspace over the Black Sea, UK Defense Secretary Ben Wallace told parliament during an update on the situation in Ukraine.

The UK temporarily suspended patrols after the “potentially dangerous” incident and raised its concerns with Russian Defense Minister Sergei Shoigu. Russia, in an Oct. 10 response, blamed a “technical malfunction” by its fighter jet, Wallace said. After consulting with allies, “I have restarted routine patrols but this time escorted by fighter aircraft,” he added.

Ukraine’s central bank kept its benchmark borrowing rate unchanged at 25% as the body’s new governor presses ahead with negotiations with the IMF on a financial lifeline for the war-battered economy.

“Continued cooperation with international partners remains an important factor in maintaining the Ukrainian economy during the full-scale war and postwar recovery,” the Kyiv-based bank said in a statement.

Russia retains control over 1.8% of the area around Kharkiv in the east of Ukraine, Kharkiv Governor Oleh Syniehubov said on Telegram.

“Since September, our military has expelled the occupiers from 544 settlements in the region. Only 1.8% of the region’s territory remains under temporary occupation — that’s 32 settlements,” Syniehubov told.

Ukraine’s armed forces and local authorities have formed three lines of defense in liberated areas, he said. Kremlin troops continue “limited assaults” in a bit to recapture lost territory, according to the Institute for Study of War.

German authorities are investigating a suspected arson attack at a former hotel housing  housing Ukrainian refugees in the eastern state of Mecklenburg-Western Pomerania.

German Interior Minister Nancy Faeser said in a tweet that if arson is confirmed the perpetrators would “be prosecuted with the utmost severity.” Emergency services rescued the residents an no one was harmed, she said.

Giorgia Meloni, the right-wing leader poised to be Italy’s next prime minister, said she’d give up on her fledgling coalition if her allies can’t commit to supporting Ukraine along with Italy’s European Union and NATO partners.

Bloomberg reported the measures targeting three Iranian generals and Shahed Aviation Industries, a company responsible for the design and development of the Shahed series of Iranian drones that have been supplied to Russia and are currently being used in Ukraine. Iran denies sending weapons to Russia.

#COREPERII | ✅ #Iran #sanctions in record time! After 3 days of talks, EU ambassadors agreed on measures against entities supplying Iranian drones that hit #Ukraine. Written procedure is over, sanctions come into force this afternoon on publication in the Off. Journal. #EU2022CZ