Rail and postal workers have suspended strike action, the Bank of England has postponed its next interest-rate decision, and the government might delay an emergency budget. Even the pound halted its decline.

The UK has hit pause following the death of Queen Elizabeth II on Thursday as an official 10-day mourning period starts. For now, national attention is focused on the state funeral and tributes to the life and service of the 96-year-old monarch rather than inflation and the parlous state of the economy.

But as reminiscences over her majesty give way to renewed rumblings of anxiety about a long, cold winter ahead, another harsh reality will hit home: just as the UK craves strong leadership and guidance, in the space of 48 hours the country has ushered in a new, untested prime minister and seen the departure of a legendary head of state who had seen it all before. A portrait of the Queen at a bus stop on Oxford Street in central London. Image: Chris J. Ratcliffe/Bloomberg

There is deep uncertainty not only about Liz Truss’s government and whether her package to contain energy bills will be enough, but about King Charles III and how his reign will shape the country. He inherits a monarchy that is already undergoing change, not least in its relationship with some Commonwealth nations where republican sentiment is growing.

There was an air of concern about what comes next as crowds thronged outside Buckingham Palace on Friday morning, where police had set up a one-way system of foot traffic outside the gates so people could place bunches of flowers. Some mourners were visibly moved as they stood and read the messages on cards and teddy bears. Well-wishers on the Mall on the first day of public mourning in central London, on September 9. Image: Hollie Adams/Bloomberg

Valerie Biggs, 80, a pensioner from Cambridge visiting with her daughter-in-law, acknowledged the nervousness about the months ahead. “The country is not in a good place,” she said. “But we’ve got to hope for the best.”

Richard Phillips, 59, and Emilia Hutnik, 37, said they had closed the shoe store where they work in the West End of London to come and pay their respects. “Politicians are up and down, you don’t always trust them,” Phillips said. “But the queen, there was no political angle. It was all from the heart.” 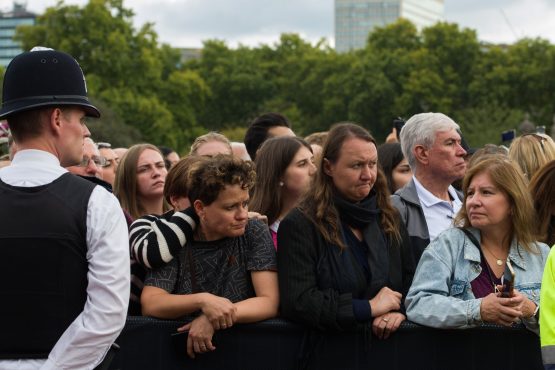 Mourners outside the gates of Buckingham Palace. Image: Nathan Laine/Bloomberg Elizabeth’s sudden death came as a shock to many, despite her great age and increasing frailty. As Charles, her eldest son and heir, arrived at Buckingham Palace and walked about greeting well-wishers, he looked visibly shaken by grief, as he did during an address to the nation later on Friday.

Her Platinum Jubilee weekend in June brought vibrant celebrations across the country by all generations, not least by young children at schools and nurseries. At the time the jubilee was seen as a welcome — if jarring — break from the gloom facing Britain.

Those perils have gotten worse. The country faces soaring energy costs this winter with blackouts and factory slowdowns forecast in government worst-case scenarios. Ambulance waiting times are at record levels. Swathes of workers, from bin collectors to barristers, have walked out over pay disputes. The pound hit its lowest level against the dollar since 1985 on Wednesday. “At a time when the government should really be knuckling down and getting on with things, we’re all in a state of shock,” said Sarah Southern, host of Windsor Watch, a podcast dedicated to the royal family. “It’s going to provide a level of uncertainty and anxiety for a lot of people because the one thing that has always been stable in their life has suddenly disappeared.”

Prime Minister Truss had repeatedly said she wanted to “hit the ground running” when she took office, but within hours of her premiership any political momentum became paralyzed — albeit, of course, due to events beyond her control.

Just minutes after she announced her plan to freeze household energy bills and cap costs for businesses, notes were being passed between senior parliamentarians about the queen’s health. Liz Truss makes a statement in Downing Street following the announcement of the Queen’s death on September 8. Image: Hollie Adams/Bloomberg

Normal politics were suspended upon news of Elizabeth’s death on Thursday evening, with officials at Buckingham Palace now in almost total control of events in the run-up to her funeral.

Senior members of the government, including Truss, had known that the queen had become frail in recent months. It was referenced in transition conversations between Truss’s team and senior government officials that the monarch’s death could inevitably come during her premiership.

Yet nothing could prepare the new premier for what happened on her second day in office, one ally said, adding that the queen had been in great spirits at their meeting at the royal residence in Balmoral, Scotland, on Tuesday.

Truss’s first month was always expected to be extremely difficult politically, with questions about her so far un-costed energy policy — which could reach £200 billion ($232 billion) — and management of a fractious Conservative Party in parliament after it ousted her predecessor, Boris Johnson. Those questions would now be silenced for at least 10 days.

Government officials insisted work would continue on her key policies. Any legislation needed for her energy policy to come into effect in October could be introduced after the queen’s funeral later this month, they said. 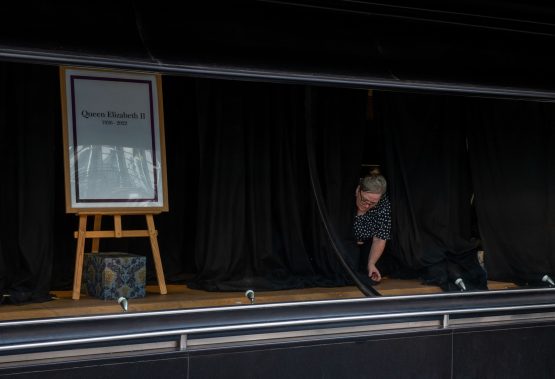 But in the meantime, the country remembers the only monarch that the vast majority of the population has ever known. As well as the suspension to strikes and protests, football matches and some other sporting events have been canceled.

“The loss of our queen robs this country of its stillest point, its greatest comfort,” Keir Starmer, leader of the opposition Labour Party, told a hushed House of Commons during tributes on Friday, “at precisely the time we need those things most.”