Traders are the most negative ever on the pound’s prospects, even after the UK government scrapped one of its new tax policies, a sign it will take a bigger policy U-turn to restore credibility with markets.

Sterling and UK government bonds have already given up most of their gains Monday since Chancellor Kwasi Kwarteng said he will scrap a proposed tax cut for the country’s highest earners. Wagers against the currency in the next year rose to a record high in the options market.

The problem for investors is that the rest of the recent mini-budget, including borrowing billions to fund energy price caps and other tax cuts, is still going ahead. While the U-turn may slightly improve the country’s fiscal picture, it also damages the credibility of a government facing a revolt in its own party and a collapse in support in voter polls. 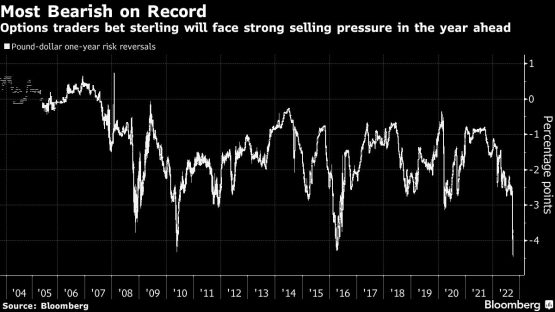 “I don’t think that a U-turn on the 45% tax plan saves the government from an ongoing high level of criticism,” said Jane Foley, currency strategist at Rabobank, adding the pound is on “borrowed time” and a decline to dollar parity can’t be ruled out. “Market trust is gone.”

The late September fiscal package sent the pound to a record low a week ago and led to the biggest-ever selloff in long maturity bonds, forcing the Bank of England to intervene to stop forced selling by pension funds to cover margin calls. There’s still uncertainty over what will happen when the BOE halts its bond buying on Oct. 14.

Wall Street banks have already predicted the pound will hit parity with the dollar this year. In the options market, traders are the most negative on the currency against the greenback over the next three months since the 2016 Brexit vote, while one-year sentiment is worse.

Here are some other views on UK markets and the tax U-turn:

“The UK remains a source of market volatility,” said Paul Donovan, chief economist at UBS Global Wealth Management. “The Prime Minister has suggested the more controversial policies were the Chancellor’s idea. So far, free markets have given a negative verdict whenever the Prime Minister or Chancellor has spoken.”

“The UK situation raises two investor considerations. Will the policy proposals actually pass Parliament? Normally a finance bill is considered a vote of confidence, but specific parts of the policy proposals are widely and strongly opposed. If the policies do pass Parliament, how long will they last? An election is due in 2024; if markets price a change of government (and policy), that may put a floor under asset prices.”

“The top rate of tax U-turn is only a symbolic gesture as it’s roughly just £2 billion,” said Jordan Rochester, a currency strategist at Nomura Holdings. “It’s a sign that they will listen to markets and politics perhaps but it doesn’t reverse the big pledges.”

“In terms of the amount of money, it’s still fairly small and won’t change the Office for Budget Responsbility’s assessment, which I am fairly sure will be damning,” said Colin Asher, senior economist at Mizuho in London. “What changes most is the optics of it — supporting bankers over nurses especially after Covid is a bad look and enough of (Kwarteng’s) Tory colleagues will have been prepared to vote against it.”

“Remember the BOE is still supporting the gilt market so yields won’t be reflecting the full consequences of recent events, including the retention of the 45% tax band. There is still nervousness over what happens in two weeks time when we revert to the status quo. Today’s move on tax rates doesn’t change a huge amount and in short term bias remains for weaker sterling.”

“The Prime Minister was hoping to carve out a reputation as the new Iron Lady, instead she will be seen as highly malleable,” said Susannah Streeter, senior investment and markets analyst at Hargreaves Lansdown. “She has been manipulated into this U-turn after senior Conservatives yesterday were coming out in open revolt at the Treasury’s decision to scrap the 45p tax band for the wealthy while refusing to rule out cuts to welfare for the poorest.”

“Admitting to a communication mistake rather than a serious policy mishap didn’t cut it. Now this embarrassing climb down, taking unfunded tax cuts off the table, which Chancellor Kwasi Kwarteng has called a distraction, will help reassure the markets a little that the more reckless nature of this new administration can be reined in by the Conservative party.”

“The policy reversal clearly indicates there is some scope for shifts in the details but the overall fiscal approach seemingly remains in place,” said Peter Goves, fixed income research analyst at MFS Investment Management. “The market may infer that the package might not be as rigid as first thought but equally it also highlights that support for the measures wasn’t convincingly broad enough for it to be voted through Parliament.”

“The key point is the unfunded nature of the fiscal impulse. This is what concerns the market because it impacts sovereign debt metrics, has implications for inflation and monetary policy amid a growth slow down. The BOE’s return has brought some welcome market stability but gilt yields remain relatively high and are still searching for further clarity on the details of the package.”

“Cable has today returned to levels seen just before Chancellor Kwasi Kwarteng delivered the infamous ‘fiscal event’ and it would now be hard to argue that cable should be trading much higher than that,” said Chris Turner, a foreign-exchange strategist at ING. “But this does alleviate the risk of cable trading to parity in that it shows Downing Street will show greater respect to financial markets when considering policy options.”

“The current government, and Truss and her chancellor are viewed as being naive at best in terms of reading markets, and it’s going to very difficult if not potentially impossible to win back that credibility,” said Foley. “There are potential signs that her tenure as party leader could be extremely short because it’s almost a no-win situation for her.”

“The market continues to view the government having something of a fiscal credibility deficit, hence we would expect the squeeze to run out of momentum ahead of strong resistance around $1.1350,” said Jeremy Stretch, head of Group-of-10 foreign-exchange strategy at CIBC, on the pound’s rally.