UK government bonds surged and the pound rallied as investors wagered the government will further depart from the expansive fiscal strategy that plunged markets into turmoil.

The yield on 10-year gilts fell as much as 32 basis points to 4.02% while the pound traded 0.7% higher at $1.1253 as of 09:46 a.m. in London. Newly-appointed Chancellor of the Exchequer Jeremy Hunt is set to give a statement later Monday on measures to support fiscal sustainability, in advance of the medium-term fiscal plan slated for the end of the month.

The negative market reaction to the initial mini-budget proposals has already forced Prime Minister Liz Truss to backtrack on a series of tax-cut pledges and fire her first chancellor Kwasi Kwarteng. Still, the government faces additional pressure to restore investor confidence in public finances now that the Bank of England’s emergency bond-buying operations, which acted as a backstop to the market, have ended.

“Hunt’s speech is a make-or-break event for sterling,” said Francesco Pesole, an analyst at ING. It coincides “with the first day of gilt trading without the support of the Bank of England’s temporary bond-buying scheme, which puts even further pressure on Hunt to deliver a credible plan to fix the UK’s troubled fiscal position.” Traders also pared bets on BOE rate hikes, as a reduced stimulus package takes the pressure off the central bank to tighten more severely. Money market wagers show the rate peaking at 5.3% in 2023, the lowest level since the announcement of the mini-budget on Sept. 23. Two-year bond yields, the most sensitive to interest rates, dropped as much as 28 basis points to 3.64%.

The BOE confirmed the end of its bond-buying operations on Monday, and highlighted that its temporary expanded collateral repo facility — aimed at enabling banks to help ease liquidity pressures on liability-driven investment funds — would remain available until Nov. 10. 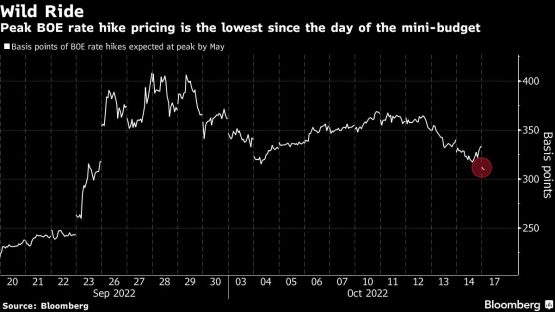 It is still unclear to what extent LDI funds, which exacerbated the bond market sell-off after facing collateral calls, have been able to build up buffers to protect against further spikes in gilt yields. That could render them vulnerable if market sentiment swings the other way.

The pound outperformed other Group-of-10 peers. It was being supported by unwinds of downside options structures, a Europe-based trader said. European government bonds also rallied, with the yield on 10-year German bonds falling 11 basis points to 2.24%.

“Its all about Hunt now. The measures in the mini-budget that he will reverse beyond the corporation tax announcement of Friday,” said Societe Generale SA strategist Kenneth Broux. “How much will be left in unfunded borrowing and how they plan to close that with spending cuts.”