Those gathering at the Denver Gold Forum this week shared a collective view that the current economic environment is unprecedented. Gold producers are grappling with the byproduct of a hawkish US central bank whose efforts to combat inflation have supercharged the dollar and driven down bullion prices. Gold prices are under pressure and equities tied to the yellow metal have slumped. A gauge of gold companies has fallen 16% this year, lagging the 7.9% decline of the precious metal.

“We find ourselves living in interesting times as the global economies and geopolitical environment hit another inflection point,” Mark Bristow, chief executive officer of Barrick Gold Corp., said at the Colorado confab. “It’s arguable that the last time we faced such uncertainty was the Second World War.”

Wednesday is the final day of the Denver Gold Forum, with the 34th annual event wrapping up just as the US Federal Reserve raised interest rates by 75 basis points for a third straight time and signaled a more aggressive-than-expected path of hikes to come. Investors attending the Colorado gathering privately admit they feel depressed at the level where gold equities and prices are trading, though they also accept that the near-term outlook remains challenging in the face of a stronger dollar. 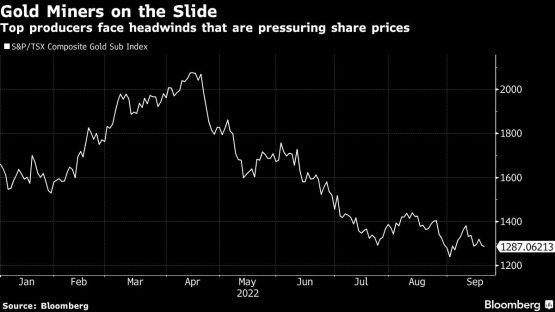 The knock-on effects from the Covid-19 pandemic and impacts of Russia’s war in Ukraine are significant drivers of decades-high inflation, while a disrupted global supply chain has been adding to cost pressures for companies and consumers. Such issues are likely to linger as the Fed’s continues its aggressive monetary tightening, according to top mining executives.

“We’re in a very volatile economic environment at the moment,” Newmont Corp. CEO Tom Palmer said in an interview. “Look out the window: you see inflation, interest rates increasing, you’ve got the tragedy playing out in Ukraine. It’s a theme that’s broader than just the gold industry.”

Palmer, who leads the world’s largest gold miner, sees cost inflation in labour, fuel and energy, as well as materials and consumables “continuing into the better part of 2023.”

Rising costs are plaguing mining companies and their operations around the world. South Africa’s Gold Fields has been dealing with high labour costs that are driving up expenses in Australia, where the company has nine operating mines, according to CEO Chris Griffith. While he has seen a cooling of fuel prices, other components key to mining, including explosives and reagents, haven’t come down yet thanks to persistent inflation.

“We’ll likely still see inflation at high levels for a significant period of time, although we’ve seen it flattening off,” Griffith said in an interview.

The Fed has been pursuing aggressive monetary tightening to bring down inflation, which has lifted bond yields and the dollar. Central banks around the world are pursuing similar hawkish measures. Such actions could make it challenging for single-asset producers and development companies that may not have the financing means to absorb costs and increase capital, according to Shaun Usmar, CEO of Triple Flag Precious Metals Corp.

“Those companies have seen stock prices come down a lot,” Usmar said in an interview. “The equity markets probably aren’t accessible — if they are, it’s very expensive, very dilutive. Debt, if they can get it, is very expensive and is getting more expensive at the moment.”

Such an environment leaves room for mergers and consolidation, especially for miners with cash and a need to grow, said Usmar, who served as Barrick’s chief financial officer from 2014 to 2016.

“The best risk mitigator for any mining company is liquidity,” he said.