The Federal Reserve’s influential staff judges that under the surface the US economy is running even hotter than they thought, helping to explain why inflation remains at a 40-year high and providing reason to expect even more interest-rate hikes.

Tucked within 12 dense pages describing the Fed’s September policy meeting last week was a statement concerning a seemingly innocuous yet vital estimate that the staff use as a building block for internal economic forecasts.

Their gauge of US potential output was “revised down significantly,” the minutes showed, due to disappointing productivity growth and slow gains in labor force participation.

Potential gross domestic product is essentially an estimate of how fast the economy can run without breaking a sweat in the form of tightening resources and higher inflation. The new estimate was not disclosed — nor was the prior one.

Even so, “the policy implication is significant,” said Anna Wong, chief US economist at Bloomberg Economics. “Lower potential growth means the economy has been more overheated last year and this year than realised, and it will take more rate hikes or a longer period of below-trend growth to close the output gap,” said Wong, a former Fed economist. 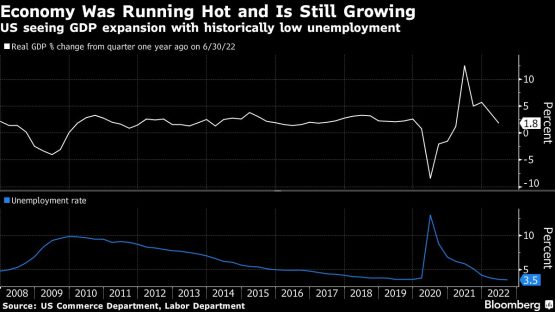 Fed staff don’t set policy. That’s the job of the 19 officials who sit on the Federal Open Market Committee. But they do provide very important inputs that help shape the thinking of policymakers, who are currently raising interest rates at the fastest pace since the 1980s to curb runaway inflation.

Wong estimates the US central bank will deliver a fourth consecutive 75 basis-point rate increase next month and keep going until they get rates in the 5% range next year.

The US economy grew at a 5.7% pace in the final quarter of 2021, compared with the fourth quarter of the previous year. If the staff revised down its estimate for potential, it suggests the economy was above its longer-run trend by even more than initially thought and remains above it, even though growth is slowing.

Like a rocket whose trajectory is overshooting its target, if the economy’s level is still above its longer-run trend, that explains why inflation continues to be broad and stubborn.

“We got way above potential in 2021, the level of GDP is still way above potential, and that explains the persistence of inflation,” said John Roberts, an economic consultant and former head of the Fed Board’s macroeconomic modelling team.

The core consumer price index, which excludes food and energy, increased 6.6% from a year ago, the fastest pace since 1982. The broader gauge was up 8.2% from a year earlier.

Growing much faster than potential also helps explain why employers added 562,000 jobs a month on average in 2021 as the labor market recovered from a brief pandemic-induced recession.

The staff also said that unemployment was expected to rise more slowly than they previously estimated and stay below their estimate of a level of joblessness that won’t stoke inflation pressures until the end of 2025. Nevertheless, inflation measured by the Fed’s preferred gauge was expected to be 2.6% next year, a remarkable deceleration from 6.2% in August. The minutes said the staff estimate is based on a view that supply and demand fall back into balance with lower energy prices.

“The staff has been relatively optimistic,” said William English, a professor at the Yale School of Management. “There is some evidence that suggests near term inflation expectations are getting built into wage inflation and that could perpetuate.”

English, who was previously ran the Fed’s powerful Division of Monetary Affairs, also pointed out that the economy appears fairly resilient, and the labor market may need to slow substantially to reduce demand and wage pressures.