The global elite is heading to the mountains again as the World Economic Forum’s annual meeting returns to Davos during the winter for the first time in three years.

The pandemic and subsequent lockdowns put paid to physical January gatherings in 2021 and 2022, but normal service is now resuming as more than 2 700 politicians, executives, investors, bankers and academics convene next week in the Swiss ski resort.

On their agendas, at the 53rd such conference: Debating the theme of “Cooperation in a Fragmented World” on numerous panels, and necking cocktails at parties thrown by the likes of JPMorgan Chase & Co. There are even daily mindfulness sessions.

Many of the guests already headed to Europe’s highest town last May with the forum’s first ever summer session, but WEF founder Klaus Schwab has revived the practice of gathering in the snow —even though less of that may feature than usual, as we showed here.

They will gather amid multiple worries, ranging from Russia’s war in Ukraine to fears a global recession is looming amid a surging cost of living. Plus the concerns over climate change show little sign of dissipating.

“We have this risk of polycrisis emerging, because so many things are happening at once,” Saadia Zahidi, managing director at forum, told Bloomberg Television. “This crunch-time leaders are facing, they’re potentially unprepared for.”

Here’s what you need to know about the event.

Who will be there

German Chancellor Olaf Scholz is the only Group of Seven leader coming. Chinese Vice Premier Liu He will also speak.

Other political heavyweights include the heads of the European Union, NATO, Finland, Greece, Spain, the Philippines, South Africa and South Korea.

At least 100 billionaires will attend. The greatest portion of those hail from the US, with Laurence Fink of BlackRock and Blackstone’s Steve Schwarzman among them. Indian and Saudi Arabian billionaires will also be there in numbers.

No Russian oligarchs will be present again. They once helped bankroll the parties and advertising hoardings, yet have now been frozen out following President Vladimir Putin’s invasion of Ukraine and the resulting imposition of international sanctions.

A delegation from Ukraine’s government will travel to Switzerland.

The crypto crash may also mean fewer of the new-age financiers who showed up in May. Sam Bankman-Fried’s FTX had been a partner of the WEF, but no more. Still, several panels will be devoted to the future of crypto and digital currencies and a group of token enthusiasts have organised an adjacent “blockchain hub” that includes an NFT gallery dedicated to digital art.

There is certainly going to be a lot of concern to share. The WEF’s annual Global Risks Report, based on a survey by the Forum, showed the threat of recession, the cost-of-living crisis and mounting debt distress will dominate the outlook for the next two years. The World Bank this week slashed its growth forecasts for most countries and regions, and warned that new adverse occurrences could tip the global economy into a recession.

“We live in an era of many shocks,” said Kenneth Rogoff, a Harvard University professor and regular attendee. “We may be at a turning point for the global economy.”

Still, a warmer European winter than feared, and China’s reopening after Covid Zero have lifted hopes in financial markets of a soft landing.

Workers may find 2023 tougher after labor markets showed surprising resilience last year. Other topics at Davos include the outlook for globalisation, food security and supply chains, as well as the risks of turning points in real estate and debt burdens.

Russia’s war in Ukraine and its prospects will likely dominate political discussions.

The US and China are also still struggling to find a way to navigate around each other while colliding on topics such as trade and semiconductor production. 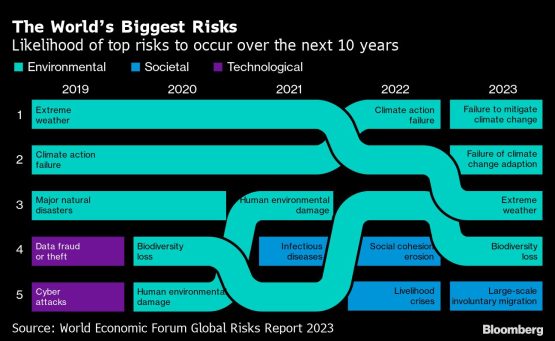 How successful Premier Xi Jinping is returning his country to normal after pandemic lockdowns will be a hot topic too, not least for its global repercussions.

In an emerging theme, numerous countries are deploying trade and regulatory tools (and in some cases, military support) to direct geopolitical aims and influence the behavior of others.

The Davos crowd was caught off-guard in early 2020 as the coronavirus spread.

Now it wants to learn lessons. The CEOs of Moderna and Pfizer will be speaking, with one panel devoted to how fast vaccines can be created the next time a pandemic hits.

The future of work will also feature. Whether to return to the office, as well as the rise of “quiet quitting” and the four-day week, are among themes preoccupying executives.

Global warming has long been a recurring theme in Davos, and this year is no different. The top four risks for the next decade mentioned in this week’s report were directly linked to climate change. All but one in the top 10 had indirect links to the warming planet.

Back in May, as many as a third of panel discussions on the main stage touched on the topic, and the 2023 timetable dedicates more than a third of all debates to something related. In fact, “climate” gets more mentions in the agenda than “energy” and “geopolitical” combined.

By contrast, the Environmental, Social and Governance acronym “ESG” receives only a single mention. The Forum knows it also has more to do to increase the diversity of its gathering, with women forming less than a third of the participation list.

Broader ESG worries are peppered throughout the agenda. Nonetheless, a falling market, tightening government regulations around standards on the matter, and a political backlash in some quarters makes it a fraught topic to touch in 2023.

If anything, talking about climate issues might be a way to avoid confrontations — with the Davos crowed largely in agreement that technological solutions and capitalism can find a way out of the crisis.

The posturing doesn’t change the fact that global greenhouse-gas emissions hit a new record-high in 2022, after coal’s resurgence during an energy crisis caused by Russia’s war on Ukraine.