Producers of raw materials for the solar sector are the key beneficiaries of rising demand this year, outpacing profit growth posted by the largest panel manufacturers.

Polysilicon prices surged to the highest level since 2011 earlier this year amid plant outages, shipping snarls and strong demand fueled by China’s world-leading acceleration of clean energy installations. The nation is on track to add a record 100 gigawatts of new solar capacity this year. 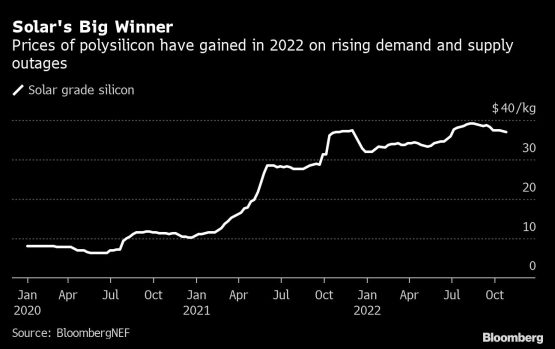 Polysilicon prices could remain at high levels until early 2023, according to UBS Group AG. Chinese authorities on Friday urged polysilicon makers to control prices, and said those that keep the rate at a reasonable range will be exempted from local power rationing plans.

While solar modules have also benefited from strong demand — and have raised prices — their profit margins have been squeezed by rising costs.

Longi Green Energy Technology Co., the world’s dominant solar equipment manufacturer, reported a 45% rise in net income for the first nine months of the year, the company said in a filing on Friday. JA Solar Technology Co., the world’s second-largest solar module maker, posted a 151% jump in net income for the first three quarters of the year, according to the company’s filing released Thursday.

One raw-material supplier that failed to benefit during the quarter was Hoshine Silicon Industry Co., the leading producer of industrial silicon that is used to make polysilicon. The company, a supplier to Tongwei and Daqo, recorded a 61% drop in net income for the third quarter as it faced a tough comparison with the year-earlier period. The price of industrial silicon surged more than 400% during the third quarter of 2021 due to China’s power crunches, but soon fell after supply resumed.