If you’re tired of reading about inflation, interest rates and central banks, we have some bad news for you – the topic remains front and centre to the market outlook for the foreseeable future.

After two decades of low and stable core inflation in developed countries, inflation exploded higher in 2021. Central banks were initially uncertain how to respond. It appeared that inflation was due to pandemic-related supply disruptions, and monetary policy cannot improve supply. It cannot drive trucks, pump oil, grow wheat or stack shelves.

However, by the start of this year, it was clear that there was a strong demand-led element to inflation in rich countries. And as the year has progressed, this has become much more evident as services inflation continues to rise, while many supply chains are increasingly unclogging.

Managing demand is a familiar battlefield for central banks. The way to lower demand is to raise interest rates, and they’ve done so aggressively this year.

The most important central bank is the US Federal Reserve (the Fed) since the US dollar is by far the dominant currency in global banking, trade, and financial markets. It hiked its policy rate range by 75 basis points to 3.7% to 4% last week, from near-zero levels at the start of the year.

This was widely expected so the question investors are grappling with is where to next?

The Fed will probably slow the pace of hiking to 50 and then 25 basis points increments, but more important is where rates will settle and how long they will stay there. 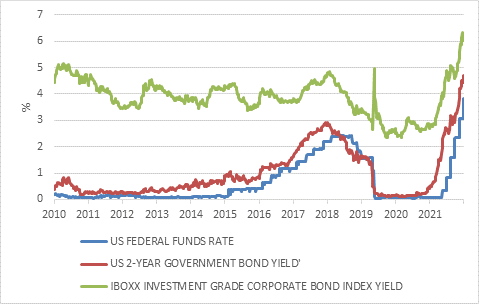 Some ways to go

At the post-meeting press conference, Fed Chair Jerome Powell stated that the Fed still had “some ways to go” and its reading of the economy since the September meeting suggests that interest rates levels will be “higher than previously expected”. In September, officials projected that rates would rise to 4.5%. The market now expects an increase to above 5%.

The accompanying statement noted that the Fed will “take into account the cumulative tightening of monetary policy, the lags with which monetary policy affects economic activity and inflation, and economic and financial developments”.

This was an important acknowledgement, explicitly for the first time, that interest rates take time to do their job. It is a drawn-out battle.

People don’t immediately adjust their behaviour to higher rates, but after a while they realise that interest payments have increased significantly and that they will need to cut spending somewhere else.

By cutting spending elsewhere, usually on big ticket items like homes, cars and furniture or discretionary splurges like holidays, downward pressure is placed on prices.

Just focusing on the housing market as an example, US mortgage rates have already jumped to 7%, making buying a house unaffordable for most people. No surprise then than sales activity is collapsing, while construction of new homes is likely to follow suit. However, most US mortgages have fixed rates for the duration of the loan so existing homeowners are therefore largely unaffected by higher rates.

In other countries, like South Africa, mortgage rates are not fixed and indebted households feel the impact of higher rates sooner.

It would therefore be naïve to think that the interest rate increases over the past 10 months would have already brought inflation in the US down.

The US labour market clearly remains robust, with 261 000 jobs added in October, more than expected, while the unemployment rate remains low at 3.7%. This is not the kind of backdrop in which demand-led inflation eases by itself, since the combination of wage growth (4.7% year-on-year) and jobs growth (4%) exceeds current inflation and implies real income growth for households as a whole.

The one bit of good news from the Fed’s perspective is that wages are not accelerating and therefore we are not seeing a dreaded wage-price spiral yet.

But this logic of lags also suggests some caution in raising rates too far, too fast – since central banks cannot gauge the impact in real time. There is a very fine line between not doing enough, and risking that inflation becomes entrenched, and doing too much and causing unnecessary economic damage.

Since interest rates work with considerable lags and unevenly across different sectors, they are very imprecise tools that can cause lots of collateral damage.

It is like using a cannon to kill a rodent, but it is the main weapon in the arsenal of central banks.

The other weapon is to tighten liquidity in financial markets by selling the massive stock of bonds they accumulated over the years of conducting quantitative easing. Adding to supply depresses bond prices, raising their yields. While we can study hundreds of interest rate cycles over time and across countries, this ‘quantitative tightening’ (QT) process is very new. The only other recent example is in 2018 and 2019.

It initially went smoothly, but by September 2019 money markets showed severe signs of strain and the Fed had to introduce a new repo facility to ensure their proper functioning. And that was in a ‘normal’ macro environment. In the current world of high interest rates, inflation, geopolitical tensions and weakening economic growth, QT is a potential source of unexpected and unintended outcomes. 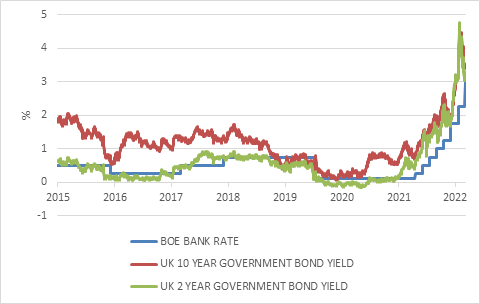 The textbook case of unintended consequences so far this year has come from the UK courtesy of former prime minister Liz Truss’s tax cut and spending plan, which ended up almost blowing up the bond market.

Things have calmed down, partly because the Bank of England (BoE) stepped in to provide liquidity, postponing its own QT plans. It is however back in inflation-fighting mode. It raised the bank rate by 75 basis points last week, the largest rate hike since 1989. At 3% the cost of borrowing is now at the highest level since late-2008. This is despite the unusually frank admission that the UK is likely to enter a ‘prolonged period’ of recession.

It helps that UK fiscal policy is likely to get a lot tighter in the coming months, though the formal announcement is only expected next week.

Tight fiscal policy – either through tax hikes or spending cuts or both – means monetary policy does not have to do all the work of lowering inflation by itself. The about-turn in fiscal policy means market expectations of interest rates increases have declined.

When Truss announced her ill-fated mini-budget in late September, the market expected that the BoE would have to take rates all the way up to 6% to counter the inflationary impact of spending increases and tax cuts. Today, the market is pricing in a peak of slightly below 5%. Now, 5% is lower than 6%, especially for those homeowners with floating interest rates.

But 5% is still substantially above 0.1%, which is where the bank’s key interest rate started the year. For some historical perspective, this rate peaked at 5.75% in November 2007 at the tail-end of the early 2000s global property boom, as the financial crisis was getting underway.

Across the English Channel, European Central Bank (ECB) president Christine Lagarde noted in a speech last week that a “mild recession” is possible but that it wouldn’t necessarily be sufficient to reduce inflation. In other words, the ECB might have to keep rates high, or possibly tighten further even as the economy contracts and unemployment rises.

The ECB recently took its key interest rate to 1.5%, after starting the year in negative territory. It is also set to discuss a plan to start selling some of the roughly €5 trillion in bonds it has accumulated over the past eight years in 2023.

In other words, more QT for the financial system to absorb.

Sticking to its guns

The one central bank sticking to its guns with low rates is the Bank of Japan.

To do so, it has bought copious amounts of government bonds and holds almost half of all outstanding government bonds. With interest rates shooting up everywhere else, it is no wonder that the yen has slumped against pretty much every other currency, particularly the globally strong US dollar. It has fallen 30% against the greenback this year, to ¥150, a level last seen in 1990.

Japanese yen to buy one US dollar 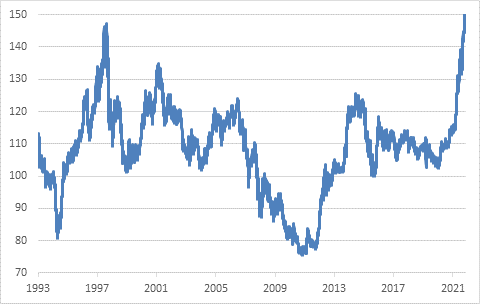 On the one hand, the Bank of Japan won’t mind since it has been trying for two decades to get inflation going. For the first time, there are some signs of real underlying inflation emerging, not just higher commodity prices, but decent wage increases and a shift in consumer expectations of future inflation. Therefore, it is not expected to change course any time soon, but this means the yen can fall further.

On the other hand, the pressure is building, increasing the risk of a disorderly unwind once it changes its stance. If the market is allowed to determine the yields government bonds trade at, those yields could shoot up, inflicting massive losses on Japanese banks, insurers, pension funds and households.

What is priced in?

Interest rate changes aren’t normally attention-grabbing events, certainly not in a world where politics, geopolitics and scandal hog the headlines, but it is hard to overstate how dramatic it is for so many major central banks to tighten so aggressively at the same time.

The global economy is not going to come out unscathed, even if the impact is not obvious immediately, given the lags with which interest rates affect economic activity.

The only question for investors is how much of the potential damage is priced in.

The immediate impact of the increase in interest rates across the world – the first bomb to drop as it were – was a record slump in global bonds, a bear market in equities, and a surge in the dollar. This is largely priced in now. Rates can go higher from here, but the bulk of the increases are probably behind us.

The next bomb to drop will be the economic impact of the higher rates. It is more difficult to know to what extent this is priced in, although some weakness is clearly discounted if we look at how expectations of company profit growth have been lowered. But in a recession, typically, you go from profit growth to profit declines, not just slower profit growth.

Still, looking at current equity market valuations, they are low enough across a broad range of markets to suggest that long-term investors – investors who can sit through volatility over the next year or so – can get excited.

Read: Recession now looks like the price to pay for beating inflation

Many emerging markets, including South Africa, are on single-digit price-earnings ratios.

Coupled with that, there are also notable opportunities in global fixed income for the first time in at least a decade across sovereign and corporate bonds. It is certainly not all doom and gloom out there, but it is likely to be a bumpy ride.

To end off, a notable example from a very real war: in World War II, the UK stock market bottomed with the disastrous defeat and withdrawal from Dunkirk in June 1940, not when Germany finally surrendered four long years later.

Dunkirk was the moment of maximum pessimism when all the bad news was priced in. This time around, the market is also likely to turn well before the war on inflation is truly won.