The pound is under pressure. A foreign central bank is fighting inflation and has raised interest rates, boosting its currency. Sterling, along with others, is losing out.

On September 16, 1992, those stresses — plus others — combined with speculative trades to create “Black Wednesday,” when the UK crashed out of the Exchange Rate Mechanism, a system linking a number of European currencies.

The Bank of England had intervened, spending billions trying to prop up the pound and keep it within a set range, but to no avail. Doubts about the ability of the authorities to correct the direction had prompted the market to go on the attack.

“There was a tense atmosphere inside the bank,” said Stuart Cole, who joined the BOE just months before Black Wednesday and is now head macro economist at Equiti Capital. “It was the bank against the markets. There was a sense of apprehension where you knew it was going to end badly.”

Fast forward 30 years, and much has changed in politics, markets and currency trading, and crucially the pound is no longer pegged. But sterling finds itself once again under pressure thanks to the actions of a central bank. This time, instead of Germany’s Bundesbank and the Deutsche mark, it’s the Federal Reserve and the dollar.

As the Fed jacks up rates to get control of inflation, the US currency is on a huge bull run. The pound is down about 15% this year, heading for what would only be its fourth double-digit full-year decline against the greenback since 1992. 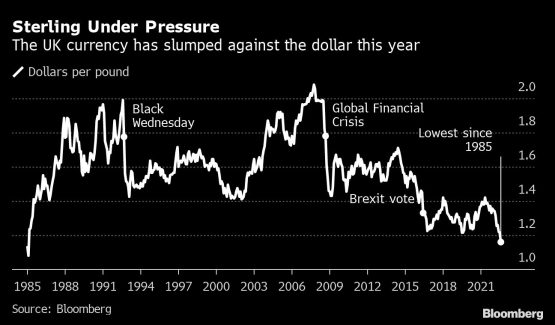 The current weakness has sparked talk — far-fetched, some say — that sterling looks like an emerging-market asset and a full-blown currency crisis is possible. The argument there is that investors may take fright at the tax cuts and higher spending pledged by new Prime Minister Liz Truss.

Norman Lamont, UK chancellor of the exchequer at the time of Black Wednesday, says there isn’t much of a link between that event and today, and the negativity is overdone.

“I don’t think the pound can be compared with an emerging-market currency,” he said. “Britain is still an attractive destination for inward investment.”

But Truss has inherited an economic maelstrom. Inflation is near a 40-year high, and consumer confidence has plunged, even if the government’s ambitious plan to cap energy bills eases short-term pressures.

Warnings of recession have weighed heavily on the pound, countering the boost from six back-to-back rate hikes by the BOE and another, potentially the largest yet, expected next week.

The current account deficit, which tallies the gap between money coming into the UK and money leaving, is also causing alarm after widening to a record 8.3% in the first quarter. With such a litany of pressures, the government can’t afford to be complacent about investor pessimism, according to Harriett Baldwin, who was on the currency desk at JPMorgan during Black Wednesday and is now a Conservative Party lawmaker.

“I was there in the 1994 bond market collapse,” said Baldwin, referring to the selloff that year sparked by US interest-rate hikes. “When they go, they can go faster than you think. We have to be careful.”

The UK’s 1992 ERM exit was a political humiliation for the government. For many currency speculators, it was a huge investment win.

By late afternoon on Sept. 16, the BOE was no longer trying to stop the currency rout. George Soros made an estimated $1 billion profit, and became known as “the man who broke the Bank of England.” Britain wasn’t the only loser at the time: Italy temporarily left the ERM, and Spain’s peseta was devalued.

“It was chaos,” said Neal Kimberley, who was a senior trader at Bank of Nova Scotia in London at the time. “I think some people made their annual target between five o’clock and half past five.”

Since then, the economic fallout on the UK has been somewhat reassessed. The devaluation helped the economy, inflation was brought under control, and the policy response started the ball rolling on giving the Bank of England independence over monetary policy.

“The period of membership of the ERM was not a very worthy episode. A slightly cruel summary of it would be to say that we went into the ERM in despair and left in disgrace. Nevertheless, we are still enjoying the benefits of it.”

For the BOE, the post-ERM policy restructuring saw the introduction of inflation targeting. While that remains the framework to this day, it looked in question this summer when Truss said that the central bank’s mandate needed a review and potentially a new target.

Charlie Bean, a former deputy governor at the central bank, warned late last month that such actions could pose a risk for UK assets. Truss’s choice of chancellor, Kwasi Kwarteng, has since backed the current remit and said BOE independence is “sacrosanct.”

While the UK’s economic outlook now is undeniably painful, strategists and traders agree that the pound’s weakness is primarily a story of dollar strength. The euro has also performed poorly, while the yen has collapsed nearly 20% against the greenback this year.

But domestic UK policies are being closely watched too.

Kwarteng will deliver a fiscal statement next week, when he’s expected to give more detail on Truss’s tax cuts and the government’s support package to help people with soaring energy bills. Investors will be looking to see how all of that will be funded.

“These issues of financial imbalances and budget positions and current accounts can exist for prolonged periods and not appear to matter,” said Adam Cole, head of currency strategy at RBC Europe. “It’s very difficult to say at what point, and for what reason, the markets suddenly start to worry about these things. But it does happen.”