Welcome to September, the start of spring in the southern hemisphere but the start of autumn in the north. While August was named after the first Roman emperor Augustus, September refers to the Latin word for ‘seven’.

In the old Roman calendar, it was the seventh month. In the modern Gregorian calendar, it is the ninth month, but the name never changed. If that sounds a bit confusing, perhaps it is apt. The world is a confusing place at the moment, and the global economic outlook is getting cloudier, not clearer.

The last week or so saw a broad sell-off across global bonds, credit, equities, and property. Commodity prices are also lower across a broad front, but natural gas and coal prices remain very high. The main reason for this is renewed signs of slowdown in China and Europe, even as central bankers continue to pile on the pressure.

As always, it is the intentions of the US Federal Reserve that matter most.

While US inflation has probably peaked and is starting to trend lower, largely due to average gasoline (petrol) prices falling about 20% from the June record of $5 per gallon to $3.80, services inflation remains elevated. Therefore, the road back to meeting the Fed’s 2% average inflation target is likely long and uncertain.

In any event, the Fed will not be taking any chances.

In a short but sharp speech at the recent annual Jackson Hole central banking symposium, Fed chair Jerome Powell reiterated that his institution remains committed to getting inflation under control, that it will not declare victory prematurely, that rates would continue rising (though probably at a slower pace) and that the economy will have to slow to bring demand and supply back into balance.

Read: Bitcoin back down below $20 000 on post-Jackson Hole caution

Since the US economy, particularly the labour market, remains relatively strong, this could require a long period of elevated interest rates.

The US economy added a solid 315 000 jobs in August, and at an unemployment rate of 3.7%, there are still around two job openings for every unemployed person.

Wage growth of around 6% plus employment growth of 4% means total household income is still growing faster than inflation, supporting demand. Since central banks cannot do anything about supply, the Fed will have to continue tightening to reduce demand.

In other words, Powell put paid to any notion that he would soon pivot from hiking rates to cutting them, as was the case in 2019. Even if the economy weakens, he wants clear evidence that inflation will be low and stay low.

It is a message that some investors did not want to hear, but in reality, it is what Fed officials have been saying for some time.

The Fed funds futures market is now pricing in rates rising above 3.5% by the end of the year, having started the year at 0%. The market is also no longer pricing in cuts early next year. The US can handle these rates for the time being, but of course the problem is that interest rates take time to fully impact any economy, and therefore growth can be expected to slow materially over the next year.

Across the Atlantic however, the inflation situation has deteriorated due to sky high natural gas prices. Russia has drastically cut gas flows to Europe, while drought and heatwave conditions have impeded the production of hydroelectricity and nuclear power.

The surge in energy costs will not only severely constrain household budgets, but electricity rationing is possible as the northern winter approaches. Eurozone inflation hit 9% in August and is likely to keep rising. 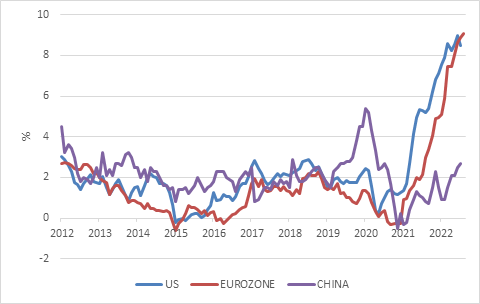 China is also facing electricity rationing as a two-month long heatwave has drastically reduced the production of hydroelectricity. This compounds the negative economic impact of Covid crackdowns and the sharp slowdown in the key property sector.

The Caixin China Manufacturing Purchasing Managers’ Index unexpectedly fell below the 50 neutral level in August, as the electricity shortages and Covid-lockdowns bit.

Unlike other major economies, China has room to ease policy. Consumer inflation remains low despite elevated producer inflation – a sign of a sluggish domestic economy – and the People’s Bank of China recently announced (modest) interest rate cuts. The government also announced limited stimulus measures aimed at boosting infrastructure investment and easing some of the financing pressures faced by property developers.

However, given that the economy is already overleveraged, Beijing is justifiably cautious about increasing debt levels, with the result that it is extremely unlikely to meet its 5.5% medium-term growth target. The bigger problem is that debt always seems sustainable when growth is strong and the ability to service the debt is growing. But when growth slows, so does the capacity to manage debt. When the self-reinforcing cycle of higher debt levels and higher growth rates turn, it can become a self-reinforcing cycle to the downside.

Looking at the above, it is no surprise that markets have had a tough time this year. At the end of August, the year-to-date dollar returns for the main global benchmarks for bonds, equities and listed property were -16%, -18% and -20% respectively.

There hasn’t been anywhere for dollar-based investors to hide.

Rand-based investors are somewhat better off.

While SA equities are negative year-to-date, nominal bonds are marginally positive, while inflation-linked bonds are having a bumper year. It also helps that the rand has lost about 8% against the dollar this year. This offsets some of the declines in dollar asset values. The rand is however stronger against the pound and euro this year. 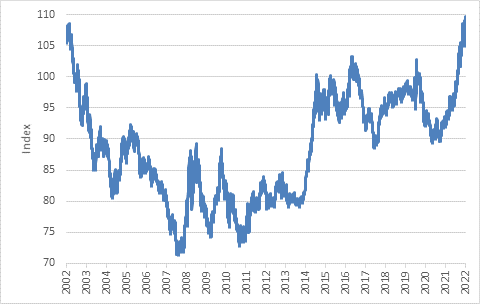 The dollar itself has hit fresh 20-year highs on a trade-weighted basis over the past few days. So much for the dollar’s oft-predicted demise. The euro sank to a corresponding 20-year low of $0.99, while the Japanese yen has declined to ¥140 per dollar, a level last seen during the Asian financial crisis of 1998. The tightly controlled Chinese yuan is also weaker since the start of the year.

This is rarely a good sign. While the dollar does benefit from higher short-term interest rates (2.75% in the US against 0% in Europe and -0.1% in Japan) it is also a symptom of global risk aversion. In stormy seas, investors seek safety in the dollar. That the US is self-sufficient in energy and far away from geopolitical hotspots, gives additional impetus to the dollar.

In turn, the stronger dollar puts the squeeze on countries outside the US. Weaker exchange rates put upward pressure on inflation and interest rates, and entities that borrowed in dollars suddenly find themselves with increased debt burdens (that includes about $200 billion in dollar-denominated debt issued by Chinese property developers).

It is for this reason that emerging market crises tend to follow periods of dollar strength, notably the mid-1980s and late 1990s.

Already, many developing countries are in trouble and the International Monetary Fund has been busy negotiating bailouts for Sri Lanka, Pakistan and Zambia in the past few months. Expect more in the months ahead, particularly involving net food and energy importers.

The two main reasons we are not experiencing a broader emerging market crisis is that many countries learnt the lessons from previous crises, and have abandoned unsustainable policies such as offshore borrowing, currency pegs and fuel subsidies.

The other reason is that several emerging markets benefit from the current surge in energy prices. South Africa is one, being a major coal exporter.

So where to from here? Clearly the global macro environment is unstable and uncertain, and investors should expect market volatility.

There are a lot of moving parts, but the key thing to keep an eye on is whether inflation, particularly in the US, is convincingly on its way down.

This will allow the Fed to ease up on tightening and give greater consideration to growth and employment. That in turn will probably signal the end of the dollar’s upward surge.

At the same time, the outlook for company earnings is important. As the above chart shows, valuations have already adjusted lower as markets price in this uncertain environment. But if company earnings expectations are overly optimistic, there is scope for further derating.

It is also notable how valuations have diverged this year. While price-earnings ratios are lower across the board, the US market trades well above the rest of the world, with South African shares looking cheap. Valuations do not tell us anything about where the market is heading in the next month or year, but are about as good a guide we have to longer-term (over many years) potential returns from an asset class.

Another way of thinking about it is that the cheaper an asset, the more negative news and perceptions are already priced in, and the less likely it is to disappoint.

There is thus more room for disappointment in US equities compared to SA.

In terms of bonds, the best indicator of future returns is the current yield. Apart from Japan, developed market bond yields are at their best levels in a decade. They can still rise in the short term as central banks grind rates higher but are probably closer to the top than the bottom. In the case of the US, two-year bonds trade at 3.5% and 10-year bonds at 3.26%.

Though they are likely to remain volatile, the high yields mean that the interest income component will more than offset price declines if the bonds are held for longer periods. Finally, cash yields have also increased to more attractive levels as central banks raise rates, including in South Africa.

Fortunately, there are areas of value on global markets that leave us optimistic about longer-term returns.

Unfortunately, the only thing we can say with certainty is that the next few months will be very uncertain.

Equally unfortunately, the more uncertain things are, the more people crave certainty. This can lead to rash decision-making and panic-selling, which often causes more damage than the market declines themselves. Many investors then want to wait on the sidelines for the dust to settle and certainty to return before investing back into equity markets. However, by the time that the clouds have lifted, and the outlook is clearer, markets have typically already bounced back strongly.

Such a strategy is akin to selling low and buying high and ends up destroying wealth.

Listen to this MoneywebNOW podcast with Simon Brown: