We love to be in the forest.  The smells.  The mountains.  The food.  The campfire.  We love to pack up and go camping.   Tent camping. RV camping. Travel Trailer camping. We have done it all and loved every moment. Exploring wild places and sleeping under the stars is the best. One of the best states to camp is California.
California is the largest state by population and one of the largest states by size. The state is known for many things like its beaches, Hollywood, and the home of Silicon Valley just to name a few. But the sheer size of the state makes it also one of the most naturally diverse places in the country and that is perhaps something that gets overlooked. California is more than beaches and hot weather, it has rugged mountains, deserts, ancient forests, and flat prairies.

The best way to get a feel for the Golden State is to camp your way through it. Experience some of the best the state has to offer by hanging out in its National Parks and State Parks. Live amongst the giant redwoods and wake up in the mornings to the sounds of the Pacific Ocean. Pack your tent and hit the road and discover some of these great camping spots in California.

One of California’s more iconic national parks is Sequoia National Park and for nature lovers, the place is absolutely stunning. What makes this place a must-visit is the giant Sequoia trees, which are the biggest trees by volume. The trees themselves are thousands of years old and Sequoia National Park has the largest one of them all standing at 375-feet high and 36-feet wide. There are over 40 groves of these massive trees in Sequoia National Park that you pitch your tent amongst.

The visitor center also has close proximity to several of the park’s destinations and there is also shuttle access from there to the park’s campgrounds so you can park your car and set out without having to hike through the park if you’re not into that.  This park is very close to Yosemite, so you can explore a vast amount of wilderness.

Located near Lake Tahoe the Minaret Falls Campground is located on the Eastern Sierras which is a little less popular of a spot, so you’ll have plenty of privacy and time with mother nature while you camp here. The area is very unlike California in that the landscapes are characterized by streams, lakes, and valleys with their unique geological formations. The park has 27 campground areas but it would also behoove any visitor to make the hike through Rainbow Falls to Devils Postpile. The scenery is amazing and you’ll get stunning views of the cliffside and their weird column-like formations in the sides. If you’re into fishing or canoeing, there are tons of streams and lakes to check out and the area is also known for its great trout fishing.

Big Sur has a lot going for it and shouldn’t be missed if you’re looking for an area to pitch your tent, spend some time outside, and generally gaze out at the blue wonder that is the Pacific Ocean. For the hikers and trail trekkers out there, you’ll be pleased to know that there are a ton of hiking paths and trails around that wind through the ocean and the rugged bluffs surrounding the coast. But for those who are looking for a more “civilized” experience, the nearby towns of Monterey and Carmel are low-key and lack that hustle and bustle of the large city life in California. Big Sur has the benefit of being on the coast but also being an area not overrun by beachside condos and McMansions – unless you count Hearst Castle.  Be aware, that the campground is small so get there early to find a location. 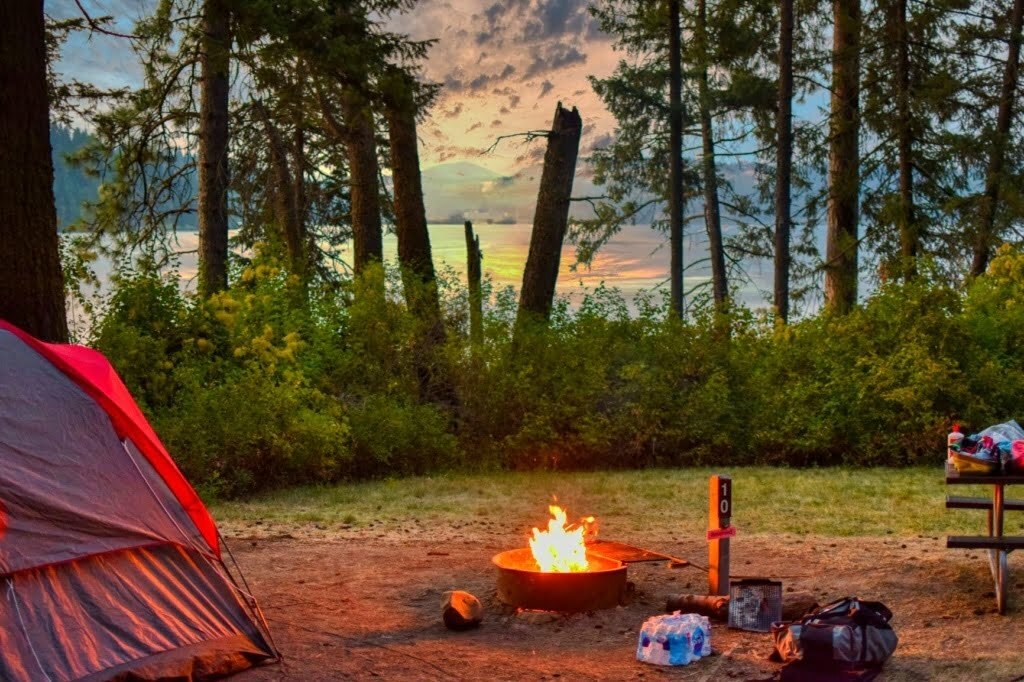 One of our campsites. We feel close to nature and in balance when we are outside camping.

Known as the grandfather of national parks this is the one in California you can’t miss – Yosemite National Park. Almost 4 million people visit the park per year on average with 95% of the park being nothing but wilderness. As early as 1864, people lobbied for the protection of the land which spurred President Lincoln to sign the Yosemite Grant which was the forefather of the National Parks System.

The park’s massive size features five different vegetation zones making it one of the most biodiverse places around in the state. Hiking through valleys and mountains can be done here only mere miles away are lakes and streams as well as forests and lush vegetation.

Because the park attracts thousands of visitors a year, people who want to camp here should certainly plan ahead. But you have plenty of options for setting up camp at Yosemite National Park. The Upper Pines area lacks some of the solitude but you’ll be near visitor center amenities and have a great view from the floor of the valley so for rookie campers or Yosemite first-timers this might be the preferable option. The Tuolumne Meadows by contrast sits almost 10,000 feet above sea-level and gives off some very European alps vibes with also easier access to nearby lakes. At the southern end of the park, the Wawona area has bigger camping areas ideal for larger groups and you’ll be immersed in the giant sequoias.  Wherever you go, whatever you do, put Yosemite on your must-do list.  We go back as often as we can.

People from all walks of life have different ideas of what it means to be camping. In recent years the concept of “glamping” has been in the lexicon and if that’s more your style then do check out the Ventana Campground. Located near Big Sur, the campground is where the towering Redwood trees meet the ocean. Big Sur has some hard to get camping spots but luckily this one is a little off the beaten path while offering a luxury camping experience.

Ventana Campground is a tent-only campground in a canyon surrounded by Redwood trees but what makes the Ventana Campground a real glamping experience is you’ll have access to hotel-quality restrooms and showering stations. There is even a makeshift lounge bar serving cocktails and drinks right there in the forest. You can also splurge on your own “glamping” tent complete with access to a spa and pool facilities.
Channel Islands National Park

Sometimes known as the “Galapagos” of California, some of the most unique places to camp in the state of California are the Channel Islands, National Park. Featuring undisturbed natural landscapes in a place that doesn’t feel like you’re even in California, the only way to get here is via an hour and a half ferry ride. The Channel Islands are five separate islands making up the park and the natural landscape offers a glimpse of what California looked like hundreds of years ago. Each of the five islands offers its own camping area with Scorpion Canyon being the easiest to get to. Visitors will have to lug their gear a half-mile from the ferry but once there you’ll have amazing views of the Pacific ocean, a night sky full of stars, and plenty of places to swim and kayak. There is also plenty of wildlife on the islands including birds and the rare Island Fox. 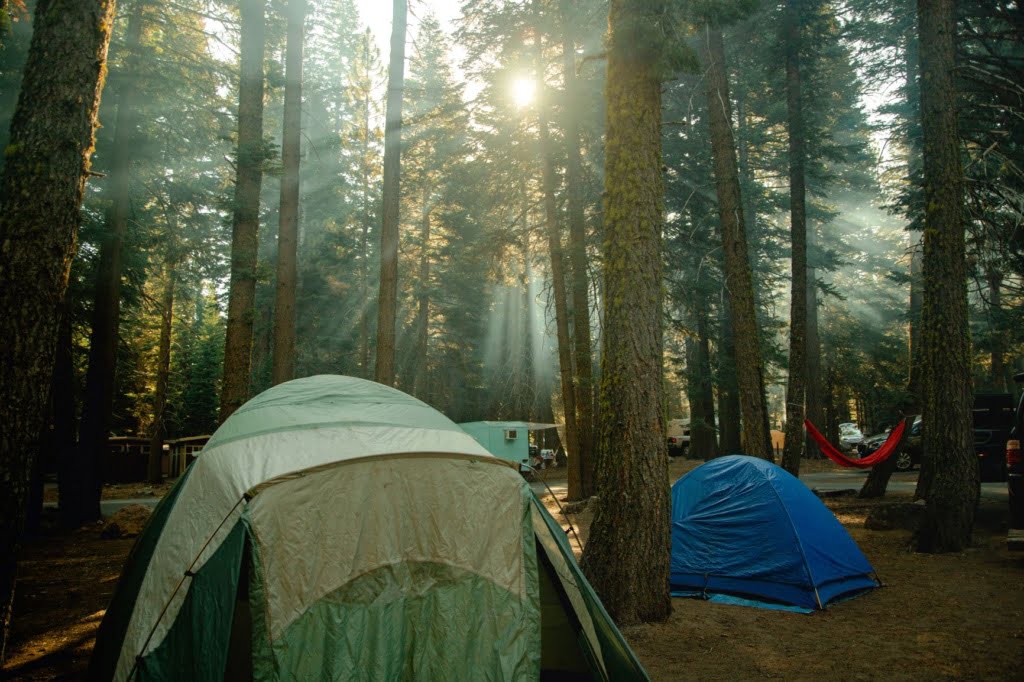 Despite its name, you won’t have to worry about any volcanoes exploding during your visit. Located in Northern California, the park features a huge 160,000-acre landscape that rivals Yosemite with less than half of the visitors and crowds.

The name of the park comes from the volcanic terrain and the Lassen Volcano which is the largest plug dome volcano in the world. The terrain is full of crystal clear lakes and flowing streams while also having far reaching hiking paths and trails that will take you through mountainous treks and green forests. There are seven different campground areas in the park including Manzanita Lake with its spiffy cabins or by Butte Lake which offers the most seclusion if you’re looking for that mountain man experience.

Mountains and forests are beautiful options for camping in California but of course, there are plenty of people who are looking to get that California beach vacation. Located in Santa Barbara, El Capitan State Beach offers the best of beach vacations with the camping and outdoors lifestyle. Wake up in the mornings to the sights of palm trees brushing in the wind and the sounds of the waves crashing ashore. Set on top of a coastal bluff the campground overlooks the beach where during the day you can lounge in the sand and surf the waves. So if you’re into surfing this is a great place for you. There are a small visitor center and store on site where you can stock up on some gear or even grab a quick shower.

Located in the Mojave Desert, Joshua Tree National Park is another one of the more iconic national parks in California. Joshua Tree National Park is over 800,000 acres of desert landscape that offers beautiful vistas and a diversity of campground options. No matter where you choose to set up camp, however, there will be a beautiful star-filled night sky waiting for you at night. The park is named after the ubiquitous yucca trees found throughout the landscape and camp spaces like jumbo rock are surrounded by giant boulders and mountain views. If you’re looking for real solitude, head to the park’s northern end at White Tank campground, the park’s smallest campsite, and furthest off the grid.

The name Laguna Beach is pretty synonymous with California. It’s the hot beachfront area with big waves, big houses, and the southern California sun. Crystal Cove State Park is located on the beach with campground spaces set on a coastal terrace above the sandy bluffs. While relatively small in size Crystal Cove State Park allows for tent camping and RV setups. There are several hiking paths nearby if that’s your thing so you can trek the tails and take a dip in the ocean to cool off after a day of hiking. The park is a great place for people looking to spend a few days in the sun, surfing or kayaking, and living that endless summer the Beach Boys were so fond of.

Don’t let the silly name deter you from coming to this great campground. The park is set in the Eastern Sierra mountains so you’ll be camping in the plains down below while the backdrop of the massive mountains looms behind you. The campground is located near Mammoth Lake and is considered public land so make sure you treat the spot with some respect and clean up after yourself. But what makes camping at Wild Willy’s Hot Spring worth it is their hot springs. Bath in the geothermal baths known for their healing properties and feel like you’re taking a dip in mother nature’s hot tub.

California is a huge state with some amazing biodiversity that extends to everything from the plants and trees to animals. It truly has some of the best wild places to see and experience in the US, possibly the world.   Immerse yourself amongst the giant sequoias in northern California or head to the sunny beaches in the south. If none of those appeal to you there’s always islands in the ocean or the wide open skies of the Mojave. California has a camping destination for every taste. 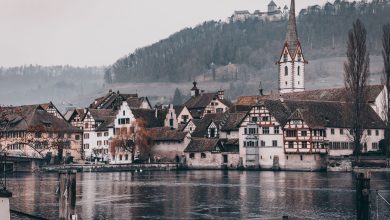