Shares of Tencent have nearly doubled from a recent low on growing signs that China is preparing to end its crackdown on major tech firms as well as optimism about the country’s reopening.

The online giant’s stock has risen 96% in Hong Kong since October 28, when it dropped to its lowest since 2017, as approvals for industry funding and new games have begun to trickle in again. In a major tailwind for the industry, some policymakers have called for a halt to China’s harshest regulatory curbs. 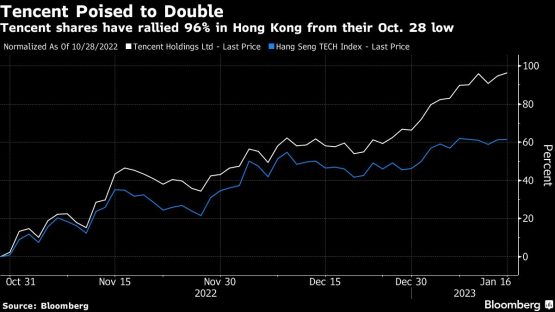 Bejing’s approval for billionaire Jack Ma’s Ant Group. to raise $1.5 billion is the clearest indication yet that the government is easing up. The abrupt cancellation of the firm’s initial public offering in 2020 marked the start of China’s regulatory squeeze, which at one point wiped out more than $2 trillion from the sector’s valuation.

The recent gains in Tencent and peers including Alibaba Group Holding, whose local shares have jumped 85% in a similar span, also reflect broader investor optimism about China’s pro-growth policies and reopening after the pandemic.

The dramatic rebound in the Hang Seng Tech Index over the past three months indicates that a sector once labeled “uninvestable” is regaining clout in investor portfolios. Tencent has rejoined the club of the world’s ten most valuable companies for the first time in six months.

“For Tencent and China tech generally, valuations still look reasonable even after the rally, as various geopolitical and domestic concerns have eased and the government looks supportive,” said Vey-Sern Ling, managing director at Union Bancaire Privee. “Earnings revisions for the sector should become increasingly positive ahead.”