Rishi Sunak took a huge step toward becoming the UK’s next prime minister as former premier Boris Johnson pulled out of the contest after a weekend of vacillation and as he won the endorsement of Chancellor of the Exchequer Jeremy Hunt.

In a brief statement on Twitter late Sunday — shortly after Johnson said he wouldn’t stand for fear of dividing the Conservative Party — Sunak vowed to lead with “integrity, professionalism and accountability” if he won the race for No. 10 Downing Street.

Johnson’s decision, days after he cut short a Caribbean holiday to get his political campaign going, leaves Sunak facing House of Commons Leader Penny Mordaunt in what is now a two-person race. Sunak, a former chancellor whose resignation in July led to Johnson’s ultimate downfall, gained the public support of several key ministers on Sunday including Grant Shapps and — on the Tory right — Suella Braverman.

Sunak has at least 123 lawmakers behind him, compared to Johnson’s 51 named backers, according to Bloomberg’s tally, which counts only 23 for Mordaunt. In his statement, Johnson said he had the support of at least 102 MPs, enough to have taken the contest to a ballot of party members who have sided with Johnson in the past.

The issue now is how many of Johnson’s camp, including Brexit hardliners such as Jacob Rees-Mogg, will throw their lot in with Mordaunt and ensure the race continues beyond Monday. According to odds at political betting site Smarkets, Sunak is a near certainty to become Britain’s fourth prime minister in three years.

But whoever wins faces the task of trying to bring unity to a party that has been through months of upheaval and bruising public infighting. Conservative support has fallen well behind the Labour opposition in polls as a brutal cost-of-living squeeze and soaring inflation darkens the economic outlook. 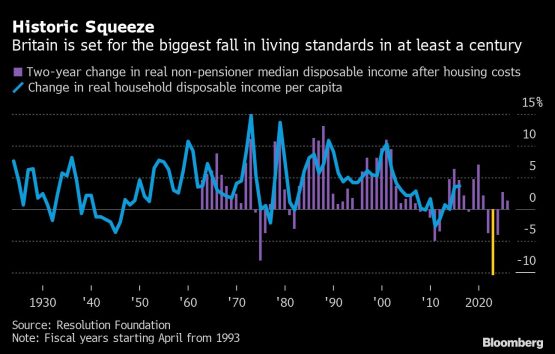 The pound extended gains after Johnson said he wouldn’t stand, rallying as much as 1.0% to $1.1401 in Asia on expectations that a potential Sunak premiership would be better qualified at trying to fix the nation’s finances.

Sunak will “turn the page on what went wrong, take decisions in the national interest and rebuild the extraordinary potential of our economy,” Hunt said in a column for the Telegraph late Sunday.

It was Prime Minister Liz Truss’s decision to step down that triggered the contest, following weeks of turmoil with investors jettisoning UK assets. Her economic plan, including a big boost in borrowing to pay for tax cuts, rattled markets and turned voter sentiment further against the Tories.

The possibility that Johnson could return to office after leaving less than two months ago was the latest twist in the upheaval of British politics that followed the 2016 vote to leave the European Union.

Johnson, whose ability to cut through to the broad electorate helped the Conservatives to a landslide win in the 2019 general election, had to step down after a series of scandals rocked his premiership. His political career appeared all but over until Truss’s administration imploded. After Mordaunt declared her candidacy on Friday, and Sunak did likewise on Sunday, the pressure was mounting on Johnson’s camp.

But after trying to broker deals separately with Sunak and Mordaunt, Johnson realized that even if he did win the support of party members, he’d struggle to run operations from Downing Street with a fractured and rebellious parliamentary party questioning his decisions.

While he remains popular with Tory members, MPs are divided about his legacy and worried that returning him to office would revive all the scandals that bought him down.

“You can’t govern effectively unless you have a united party in Parliament,” Johnson wrote in his statement. “There is a very good chance that I would be successful in the election with Conservative party members. But in the course of the last days I have sadly come to the conclusion that this would simply not be the right thing to do.” The party set a deadline of 2 p.m. Monday for contenders to certify the support of at least 100 MPs each to go forward to a ballot. If there’s more than one candidate running by the end of Monday, party members will have the final say in an online vote, with a result due on Friday.

Johnson didn’t endorse anyone, saying he’d support whoever wins. While Sunak has a commanding lead, his coronation isn’t necessarily clear cut and there are some scenarios where Mordaunt could emerge as the favorite of Tory members.

Earlier in the summer, he lost to Truss in the leadership battle to replace Johnson, with Tory members concerned about his role in Johnson’s downfall and his decision to raise taxes to the highest level since World War II. There’s also unease about his personal wealth and his aggressive attacks on Truss during that contest. Mordaunt’s star is rising and she has a more informal tone that jibes better with the electorate than Sunak’s more polished image.

She served as trade secretary before being promoted to lead the House of Commons, while her confident performances in the lower house and optimistic outlook generated talk she could help Conservatives move beyond Johnson-Sunak controversies.

In the contest that installed Truss as premier, Mordaunt placed second to Sunak — and ahead of Truss — in every round of voting among her MP colleagues until the critical one. In July, a ConservativeHome website survey of party members ranked Mordaunt second behind Defense Secretary Ben Wallace on who should be leader.

Those factors may encourage Mordaunt’s reluctance to step aside.

In a column for the Telegraph newspaper, Mordaunt wrote she’d focus on cutting taxes and raising productivity to “deliver growth and prosperity” across the nation, a pitch similar to what Truss offered.

“I understand the challenges families are facing, and I know how difficult things are when household budgets are squeezed, the cost of living goes up and public services just don’t seem to be there,” Mordaunt wrote. 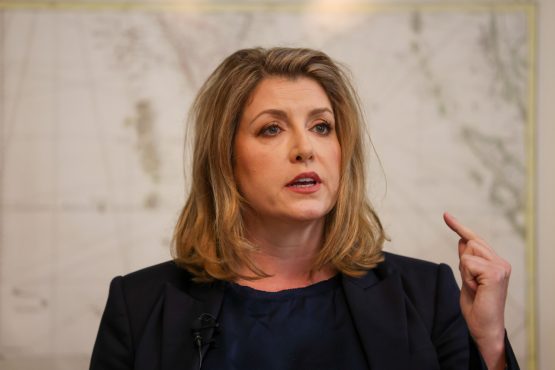 But Tory leaders are concerned at the growing economic crisis starting to engulf the country. A closely-watched survey due Monday morning is likely to show a recession is deepening as inflation lingers at its highest level in 40 years.

A burgeoning budget deficit has left Hunt warning about difficult decisions ahead. He’s due to deliver a major statement on the Treasury’s tax-and-spending plans on October 31, a date picked to better inform the Bank of England on how quickly it raises interest rates.