A strong dollar is likely to weigh negatively on the US economic outlook and could alter how high the Federal Reserve ultimately raises interest rates, economists surveyed by Bloomberg said.

Nearly half of the economists said that international fallout from a strong dollar was either somewhat likely or very likely to spill back to the US over the next 18 months and affect monetary policy. Just 28% saw the currency strength as unlikely to have any impact.

The dollar has risen about 13% this year against other major currencies amid geopolitical tensions following Russia’s invasion of Ukraine and as the Fed aggressively raises interest rates to fight an inflation rate that’s at a 40-year high. The survey of 40 economists was conducted October 21-26. Officials are expected to continue their campaign with another 75 basis-point increase on Wednesday. Their last forecast showed rates reaching 4.4% by year end from a current target range of 3% to 3.25%, and nudging to 4.6% in 2023.

Chair Jerome Powell and his colleagues are trying to cool the economy and ease price pressures by deliberately tightening US financial conditions, of which the value of the dollar is an important component. A stronger dollar tends to dampen inflation by reducing the costs of imports and lowering domestic production as it raises export prices.

“The Fed and its counterparts around the world are in the uncomfortable position of hammering demand to meet a supply-constrained global economy,” said Diane Swonk, chief economist at KPMG LLP., in a survey response. “They understand there are spillover effects but have no way of overtly addressing those risks given their own domestic mandates.”

“Usually the trade deficit would balloon when the dollar appreciated as much as we had seen since last year. But that effect has been curiously absent so far, even as we are already about five quarters into the appreciation process. One possible explanation is that US is increasing its exports in energy products. The fact that this tightening channel of dollar is absent means that the dollar appreciation is less contractionary to the economy than historically.”

Economists in the survey were divided on how serious financial stresses and strains will become, with a majority seeing an impact on the central bank’s moves. In the survey, 44% said they believed the Fed could fully complete its aggressive rate tightening despite possible stresses. But 38% said the policy makers would be forced to cut rates earlier than expected and 18% said the Fed would not be able to raise rates as much as planned. “The Fed may be able to hike as planned but will be forced to slow its pace to avoid financial instability,” said Julia Coronado, the founder of MacroPolicy Perspectives LLC.

Survey respondents expect rates to peak at 5% early next year and a majority of the economists now expect a US and global recession.

A number of prominent economists, including Nouriel Roubini, have warned that troubles in financial markets could cause the Fed as well as other central banks to backtrack from fighting inflation. “You have a major financial institution that may crack globally, not in the US maybe now, but certainly internationally,” Roubini said. 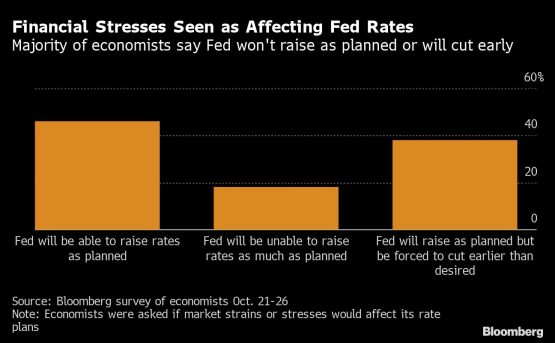 Financial stresses were most recently evident in the UK where the Bank of England had to step in to support markets, and Liz Truss resigned as prime minister after only 44 days in office amid a backlash over her low-tax economic plan which shook investor confidence.

Two thirds of economists said the British market turmoil resulted very largely or exclusively from UK policies as opposed to Fed tightening and the stronger dollar.

The Fed is sometimes referred to as the central bank to the world, reflecting the importance of the US in the global economy. Three-quarters of economists say that’s a proper description, though 33% also say the Fed doesn’t fully appreciate its role. In contrast, 22% said the Fed has responsibility only to the US economy and its domestic mandate of maximum employment and price stability.