Asian stocks followed US equities lower, as Treasury yields held at the highest level since the global financial crisis and investors weighed risks to Chinese markets.

A gauge of the region’s equities fell to head for a second week of declines. US stock futures were steady in Asia amid wariness around economic challenges that saw the S&P 500 swing from a gain of more than 1% to a loss of almost the same.

Traders are being challenged by mixed signals from the Chinese government and the twice-a-decade party congress. Sentiment has been supported by a report that officials were considering relaxing quarantine rules. On the flipside, the Biden administration is reportedly exploring possible new export controls on China’s access to powerful emerging computing technologies which may add to headwinds for the nation’s stocks.

The dollar was supported amid elevated Treasury yields. The pound fell, while the yen remained weaker than the closely-watched 150 per dollar level, boosting speculation that more intervention will be needed to support the Japanese currency. 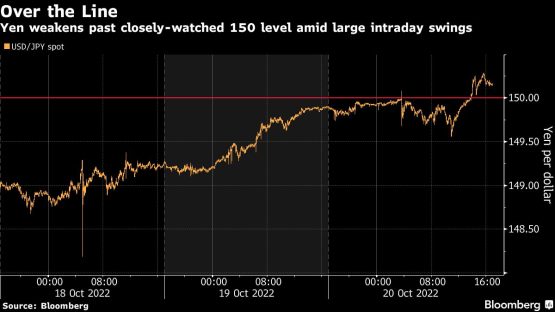 Hawkish remarks from Federal Reserve officials and swaps pricing in a 5% peak policy rate in 2023 should continue to support the greenback against its major peers and emerging-market currencies.

Japan’s benchmark 10-year yield was back at the 0.25% upper limit of the central bank’s trading range after the monetary authority announced unscheduled bond purchases Thursday to rein it back in.

Shares of some Chinese chip-related stocks fall as the US was said to be considering new export controls that would limit China’s access to powerful computing technologies.

Meanwhile, US equity volatility is showing no signs of abating ahead of Friday’s $2 trillion options expiration and another raft of corporate earnings.

Intraday swings in American technology stocks were even more pronounced than those in the S&P 500. A tech-led advance quickly fizzled out Thursday after Philadelphia Fed chief Patrick Harker said policy makers are likely to raise rates to “well above” 4% this year and hold them at restrictive levels, while leaving the door open to doing more if needed.

“We’re in the middle of third-quarter earnings season in the US and I think the thing that really stands out is the lack of downgrades that we’ve seen,” Julia Lee, equity investment strategist at State Street Global Advisors, said on Bloomberg Television. “We’ve seen commentary around still a very strong economic backdrop and this is exactly what the Federal Reserve doesn’t want to see.”

Elsewhere, oil fluctuated on Friday after a volatile week as concerns over a global economic slowdown continue to weigh on the market. Gold slid nearer a two-year low.