Stocks rallied in Asia Thursday, putting a gauge of the region’s equities on course to snap five days of declines after US shares climbed on improved consumer confidence and better-than-expected earnings.

The biggest moves were in Hong Kong, where the benchmark index rose about 3%. Technology and property companies led the charge after a slew of comments from regulators on supporting the broader economy and real estate developers.

Shares also jumped in Japan, South Korea and Australia. US and European futures were higher following a surge of 1.5% in both the S&P 500 and the Nasdaq 100 on Wednesday.

Treasuries rose slightly in Asia after a mixed US session as the immediate fallout from the Bank of Japan’s surprise policy shift began to ebb.

The yen resumed its advance after a small loss Wednesday. It rallied the most since 1998 on Tuesday. The dollar fell versus its Group-of-10 counterparts. 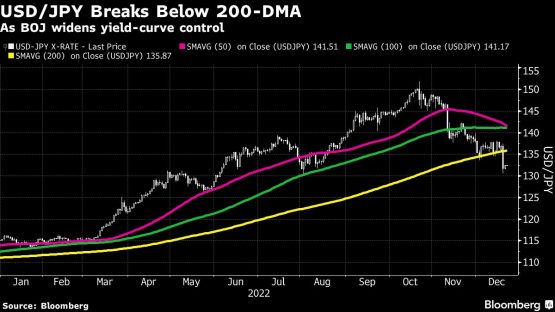 FedEx Corp. and Nike Inc.’s earnings exceeding Wall Street’s estimates provided a reprieve for US stocks that had been pummeled since the Federal Reserve’s hawkish turn last week. Appetite for risk taking was also supported by US consumer confidence rising by more than forecast to the highest since April as inflation eased.

Bolstering the tone in Asia, China’s central bank said it would guide financial institutions to support mergers and acquisitions in the nation’s property sector, and help defuse risks and improve financial conditions of top-tier developers.

“The Hong Kong and China market may do a bit better,” said Redmond Wong, strategist at Saxo Capital Markets, noting that a lot profit-taking was now out of the way and there has been some subsiding of fear over Covid.

Still, the market remains wary given a surge of infections in Shanghai and concerns in Beijing earlier in the week amid reports of crematoriums being overwhelmed with bodies.

Meanwhile, as the dust starts to settle after the BOJ’s surprise move on Tuesday, wagers are in motion that the central bank will join its peers next year in raising interest rates.

Surging global yields have now shrunk the worldwide stock of negative-yielding debt to about $821 billion, from a $18.4 trillion peak reached two years ago.

Elsewhere, oil price gains extended into a fourth day after data showed a decline in US inventories and traders tracked the fallout from Group of Seven sanctions targeting Russia’s crude exports and revenues.

Gold inched higher as investors digested an improvement in consumer confidence while awaiting further US data.

Traders will continue to contend with additional data this week. Real gross domestic product for the third quarter is likely to be revised down in Thursday’s release, and could be flat in the fourth quarter, said Bill Adams, chief economist for Comerica Bank. Data on Friday, meanwhile, will give investors more insight on consumer spending.