Global price moves for some agricultural commodities have been dramatic since Russia invaded Ukraine at the end of February. Locally, African countries including South Africa have been intensely affected by the growing crisis, which has sent prices of grains, cooking oils, fuel and fertiliser soaring. South Africa’s largest food redistribution organisation, FoodForward SA recently conducted a food price comparison review between 2021 and 2022 and it showed that basic food prices had increased by 12.9% in the past year alone.

The chart below shows how global prices have jumped, with wheat gaining most.

We believe these prices are likely to stay around these high levels for the foreseeable future.

Demand is set to remain high across the globe, while supply will remain constrained this year and next. This tightness in supply and demand may even worsen in 2023 and beyond. That’s because unpredictable weather patterns are adding to supply uncertainty, alongside the possibility of continued disruption to production in Ukraine.

Meanwhile, crops will likely be produced with lower levels of fertiliser, following significant price rises and supply disruption in fertiliser markets as a result of the war. 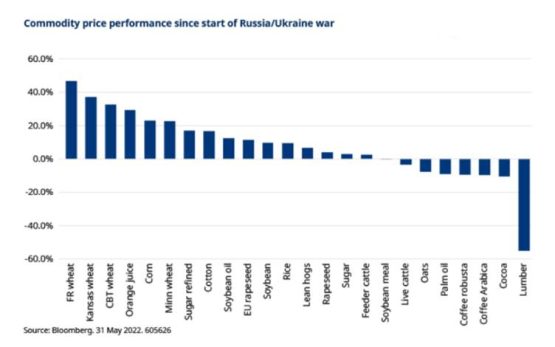 The reason for the price rises is clear when we consider how important Ukraine and Russia are as exporters of food and other commodities. Sunflower oil and grains (corn, wheat and barley) have been most impacted on the agricultural side.

Potash (40% of global exports when Belarus is included) has seen the most disruption on the fertiliser side. The long-term supply disruption for Ukraine is still unclear. However, many of the most crucial agricultural regions have seen fierce fighting, farmland blighted by landmines on a large scale and destruction of agricultural equipment.

The disruption to commodity exports from Ukraine and Russia will have price repercussions on other commodities too. Palm oil prices look set to rise as it is increasingly used as a substitute for sunflower oil, for example.

Rising prices across a broad range of commodities also reduces the incentive for farmers elsewhere to shift into wheat, which would address some of the supply constraints, because they can get decent prices for other crops anyway.

Another limitation on other regions’ ability to fill project shortfalls is the disruption to inputs such as fertiliser. The cost of fertiliser for US farmers has increased from 14% of revenue in 2020 to around 23% in 2022.

This is already resulting in changes in planting behaviour. For example, US farmers are planning to plant record levels of soybeans (which requires relatively less fertiliser) and less spring wheat and corn, according to the USDA’s most recent survey.

Recently there have been signs of fertiliser demand destruction. Farmers have held off buying fertilisers where possible, hoping that prices will come back down over the course of the year. This has proven to be a fairly self-fulfilling prophecy, with US prices 35% below their March peak. According to fertiliser manufacturer Omnia, prices of fertiliser input materials have gone up by between 200% and 400% – reaching their highest level since 2010. Omnia supplies fertiliser to both commercial and smallholder farmers in several sub-Saharan African countries, including South Africa, Zimbabwe, Zambia, Mozambique, Kenya and Tanzania. 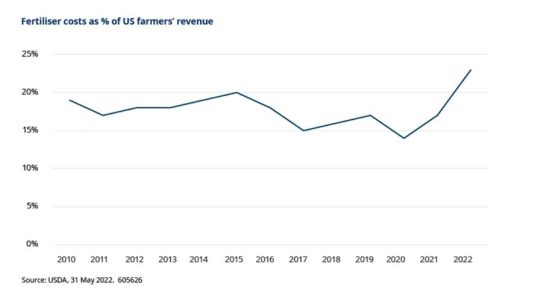 For wheat, the application of fertiliser starts fairly early in the season, with the peak application in late-June to mid-August in the northern hemisphere. The extent to which demand is being destroyed, rather than deferred, should therefore be seen in the next few weeks.

Given the disruption to both crop and fertiliser exports, it is no surprise that various countries are taking steps to protect their food supply. Currently around 17% of the world market in calories is under food restrictions. 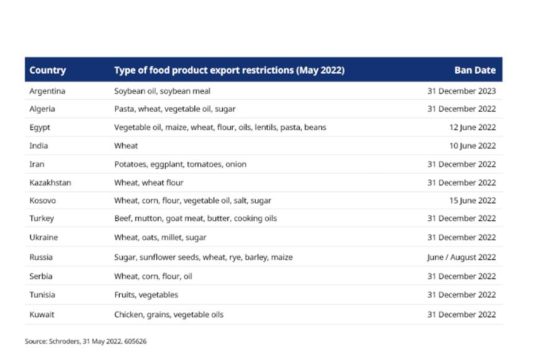 Reliance on food imports varies but is as high as 100% in some countries in the MENA (Middle East and North Africa) region. As the market tightens, supply becomes more dependent on marginal producers – that is, those who produce a relatively small amount. This increases the risk of food price volatility from extreme weather events. We can see that West Africa is particularly at risk, with 70% of cropland exposed to drought. 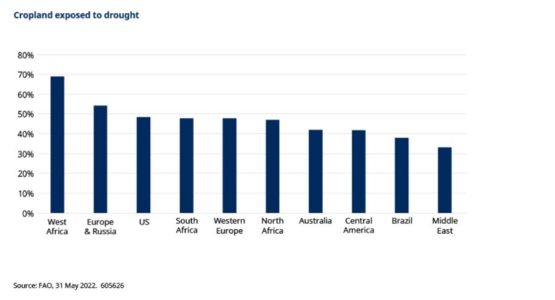 As well as curbs on exports, another response to tight agricultural commodity markets might be shifts in flows and usage. Around 20% of the world’s wheat is used for animal feed, so we may see substitutes being introduced to try to preserve wheat for human consumption.

Biofuels are another area that may be affected, given they use about 10% of the world’s wheat. First generation biofuel companies (i.e. those that use edible foods rather than using waste) may feel some policy pressure if governments pause or unwind subsidies. Supply constraints and reputational damage are other risks.

We have recently seen a debate among the G7 countries to postpone in order to try to alleviate food shortages. The mandates call for biofuels to be blended with ordinary petrol and diesel in order to reduce emissions. If a postponement is enacted, it will be very difficult for countries like Germany to meet their carbon commitments around transport. The fact that this is being considered shows the extent of the inflation dilemma that policymakers are in.

The Ukraine crisis has brought food security into focus. Additionally, the longer-term narrative around food supply is changing.

Population growth means that global food and water production is expected to need to increase by 70% by 2050 versus 2010 levels. Climate and wider environmental factors mean that resource intensity needs to be reduced by about two-thirds at the same time.

In the near term, it is likely that food security will be the priority of governments. Higher fertiliser prices, tight agricultural equipment markets and disrupted value chains for things like pesticides, means that global yields across the agricultural commodity complex could fall both this year and next.

Looking further ahead, the system needs to be made more sustainable, or it will be subject to increasingly detrimental negative feedback loops such as extreme weather and ecosystem degradation. Even under a scenario of 2 degrees of global warming, wheat and corn yields are projected to fall by 14% and 12% respectively.

All of this paints a picture of elevated agricultural prices in the foreseeable future.