South African financial markets may end the year in a more vulnerable position because of the risk it faces of being subjected to more oversight by a global watchdog over shortcomings in tackling illicit finance.

The Paris-based Financial Action Task Force has given South Africa until early November to outline proposals to address its deficiencies when it comes to combating money laundering and the financing of terrorism. The government will have to demonstrate it has a credible plan to address the inadequacies, failing which it could be placed on a so-called gray list of jurisdictions next year.

“That is a very clear and direct result of a lack of governance,” Ann Leepile, chief executive officer of Alexforbes Investments, said in a panel discussion at the launch of the Bloomberg New Voices initiative in Cape Town on Thursday. “Risks like that remain deterrents to global investors” and need to be addressed in order for the country’s economy to grow, she said. 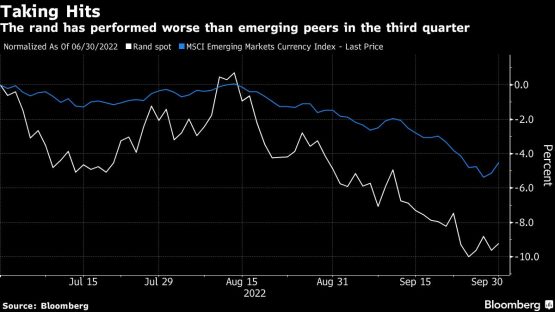 South Africa’s currency and securities have been whipsawed this year by global developments, including Russia’s war with Ukraine, spiraling inflation and rising interest rates, with many investors reducing their exposure to emerging nations and seeking safer havens.

“The negative sentiment has resulted in people holding onto cash or not investing at all,” Mbhokota said. “Assets under management globally and in South Africa have dropped.”

The rand has declined 9.4% against the dollar this quarter, making it one of the worst performing developing-nation currencies over the period, while yields on the nation’s local-currency debt trade at more than 11% and are higher than most of its peers. South Africa’s benchmark FTSE/JSE Africa All Share index has slumped 23% in dollar terms since January, the worst nine-month performance since 2011, data compiled by Bloomberg shows.

South Africa being added to the gray list would require “a lot of work” and additional investment to deal with the impact, said Pillay.

“If I think about the gray-listing in itself and how that’s impacting banks particularly, there’s going to be a lot of work that we’re going to have to navigate,” she said. “We need to really apply our minds.”