The global food import bill is set to climb to a record $1.94 trillion in 2022, some $128.6 billion more than predicted in June, as production costs soar and supply chains are disrupted, according to the United Nations’ Food and Agriculture Organisation. Many economically vulnerable countries are paying more while receiving less food, the Rome-based agency warned in a report Friday.

“These are alarming signs from a food security perspective, indicating importers are finding it difficult to finance rising international costs,” the FAO’s markets and trade unit said. 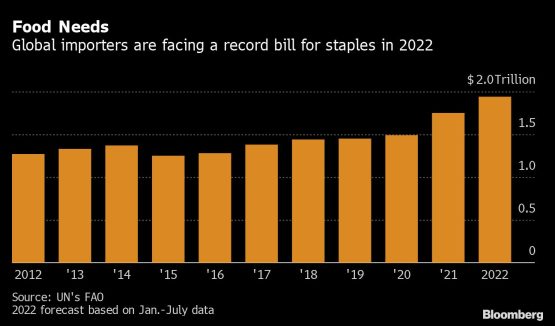 Spending on imported foodstuffs continues to rise even as the FAO food price index fell for straight seven months, reflecting a drop in commodity prices. The FAO’s food import bill includes a wider range of items from fruit and vegetables to seafood, cocoa, tea and spices, as well as beverages and staples like grains and meat.

Food imports will surpass last year’s all-time high by $180 billion, or 10%, with the rise driven mainly by high-income and upper middle-income countries. The pace of the increase in that bill will slow as higher prices and a stronger dollar erode the purchasing power of importing countries, reducing volumes.

The total food import bill for a group of low-income countries is expected to remain little changed even though shipments are expected to shrink by 10%. That points to a growing inaccessibility issue, the FAO said.

Separately, the global import bill for agricultural inputs such as fertilizers, fuel and seeds is expected to jump 48% to a record $424 billion from 2021. Higher bills coupled with a stronger dollar will cut input applications, threatening both productivity and food security into next year, the FAO said.