Emerging market equities are on track for their worst first-half performance in 24 years, as investors fret over high inflation and a potential hit to the global economy from monetary tightening.

The MSCI Emerging Markets Index has fallen about 17% this year through Monday, the second-steepest plunge for the period in data stretching back to 1993. The benchmark slid more than 20% during first six months of 1998 when the Asian financial crisis upended markets. A few months later, Russia defaulted on its local debt.

Once again, plenty of clouds hang over developing country assets: There are fears that aggressive interest-rate increases by the Federal Reserve to curb US inflation might tip the world’s biggest economy into recession, spreading gloom in emerging markets. Russia recently defaulted on its foreign-currency sovereign debt for the first time in a century and China is still winding back strict Covid-19 curbs. 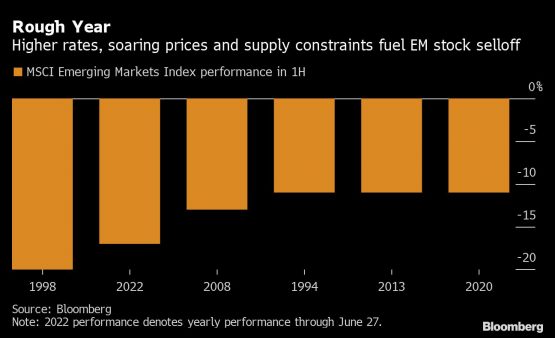 “Clearly, higher US rates, US dollar strength, and high fuel and food prices are a toxic cocktail for poor, indebted parts of EM, although much of that risk is already digested in the affected markets,” said Hasnain Malik, a strategist at Tellimer in Dubai.

The MSCI EM Index has slumped for the last four quarters in the longest losing streak since 2008 and now trades at about 11.9 times estimated earnings, hovering near its lowest valuation since March 2020, the start of the pandemic. State Street is also concerned about the outlook for company earnings in developing countries, given the threat of a recession brought on by central bank interest rate hikes.

“We continue to see a difficult environment for EM stocks for the second half and we would therefore suggest a higher degree of selectivity while investing in these markets,” said Leonardo Pellandini, an equity strategist at Bank Julius Baer.

JPMorgan Chase & Co. is more optimistic. Strategists led by Marko Kolanovic expect emerging-market equities to outperform developed peers in the second half, forecasting a 20% upside from current levels to the MSCI Emerging Markets by the end of the year.