The government offered to sell R3.9 billion of securities at its weekly debt auction on Tuesday, with yields on its benchmark notes exceeding 11%, and traders placed R7 billion of orders, according to the central bank. That’s the least relative level of interest they’ve shown since October 2021, data compiled by Bloomberg show.

“The current high bond yields now encompass a high risk premium, which is valid given the much higher fiscal and political risk in South Africa,” said Rashaad Tayob, the Cape Town-based head of fixed income at Foord Asset Management. The unfolding situation means this premium “should remain elevated, and potentially increase,” he said. Ramaphosa’s political future was cast in doubt on November 30 when an advisory panel headed by Sandile Ngcobo, a former chief justice, issued a scathing assessment of the president’s handling of the theft of at least $580 000 at his game farm in 2020. It disputed Ramaphosa’s assertions that the cash came from the sale of 20 buffalo to a Sudanese national, that his farm manager had stashed it in a couch, and that he’d done nothing wrong.

The president is contesting the report in court and has been given assurances by the governing African National Congress that its lawmakers will reject the panel’s report when the matter is debated in parliament on December 13. But there remains a risk that some party members could break ranks and side with the opposition in voting for the start of impeachment proceedings — a process that could take months.

The ANC’s integrity committee may also rule that the president brought the party into disrepute and recommend that he step aside, although the party’s top leadership would likely make the final call.

Since the release of the panel’s report, South Africa’s local-currency bonds have been the worst performers among those in 25 emerging markets monitored by Bloomberg by a wide margin, with the 10-year notes bearing the brunt of the selling. Yields on those securities are trading above 11% and are 150 basis points higher than their five-year average.

Non-residents have been net sellers of local-currency securities in three of the four sessions since the explosive findings were made public, settled trades data reported by stock exchange operator JSE Ltd. show. The rand’s implied volatility has meanwhile jumped to its highest levels since November 2020, while the currency is about 2% weaker against the dollar than it was on the day the news broke. 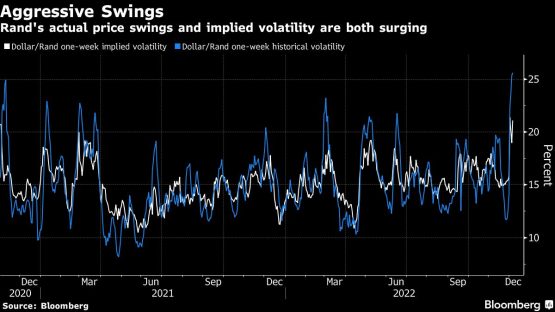 On Monday, Fitch Ratings warned that the scandal added risk to South Africa’s policy outlook, even though broad policy continuity remains the most likely scenario.

Despite the scandal, Ramaphosa is expected to win a second term as ANC leader at its December 16-20 elective conference, after securing the vast majority of nominations for the post. That would place him on track to secure a second term as the nation’s president in 2024.

Tayob said the incumbent’s victory isn’t guaranteed and he can expect a strong challenge to his leadership.

“Even if the president survives into next year, he has been permanently wounded by the information which came out in the report,” Tayob said. “Much of his political capital will be spent dealing with the investigations and we see continued stasis in economic policy.”