South Africa is teetering on the brink of its most severe power cuts yet, just two months after the government announced emergency measures to try and end intermittent outages, prompting President Cyril Ramaphosa to cut short an overseas trip to oversee the response to the crisis.

State power utility Eskom, which provides the bulk of the nation’s electricity, began cutting 6 000 megawatts from the national grid over the weekend — equivalent to the most on record — to prevent the collapse of the national grid and its executives warned there was a risk the situation could deteriorate further. The rand weakened to a two-year low against the dollar on Monday, while shares of mining and manufacturing companies slumped.

“The situation will almost definitely get worse,” with no immediate signs of substantial new capacity being added to the grid, said Hilton Trollip, an energy research consultant at the University of Cape Town.

Eskom is struggling to meet electricity demand because its old and poorly maintained power stations continually break down, and the nation has been subjected to rolling blackouts since 2008. There have been blackouts for eight straight months this year. 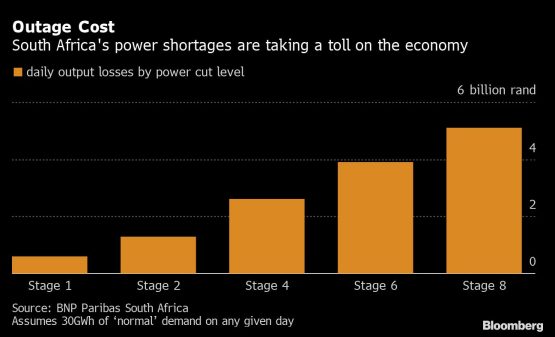 Ramaphosa, who is in the UK attending Queen Elizabeth II’s funeral, decided to skip a planned address to the United Nations General Assembly and head home instead after holding a virtual briefing with cabinet ministers and officials, according to his spokesman Vincent Magwenya. It’s the second time he’s had to curtail an overseas visit to respond to the energy crisis — he cut short a visit to Egypt in late 2019, just five months after he was elected president.

While Ramaphosa announced plans two months ago to increase Eskom’s maintenance budget to improve its plants’ reliability and enable it to buy more surplus power from private producers, those measures largely focused on longer-term solutions and haven’t made a tangible difference so far. An earlier plan to buy emergency power from producers has faced ongoing delays, with only 150 megawatts of capacity from private projects by developer Scatec ASA forging ahead.

The latest power cuts have “come at the worst possible time” as financing conditions are tightening significantly across the globe, economists at Rand Merchant Bank said in a note to clients.

The rand weakened as much as 1.1% to R17.79 to the dollar on Monday, the weakest level since May 2020. The FTSE/JSE Africa All Share Index dropped for a fifth straight day in Johannesburg, declining as much as 1.6%.

“We are sending people underground and working, but there are implications” for production, with energy-intensive units and processes being managed to reduce power demand, platinum-group metals giant Sibanye Stillwater said in response to questions.

The power cuts contributed to the economy’s 0.7% contraction in the second quarter. BNP Paribas analysts estimate that it would cost the South African economy R5.1 billion a day should the situation worsen to the point where 8 000 megawatts of capacity were removed from the grid.

Ongoing outages could affect water and sanitation services because pump stations may not be able to operate properly, according to the municipality of Cape Town, the country’s main tourist hub. While permanent generators have been installed at all wastewater treatment plants, there is limited availability for mobile plants and some sites could overflow if outages last more than a couple of hours, it said.

On Sunday, Eskom said it plans to buy about 1 000 megawatts of electricity from private producers, but didn’t spell out where it will access that capacity or where the money will come from. The utility has already spent R7.7 billion this year on diesel to run turbines used at times of peak demand, and is in talks with the World Bank to borrow an equivalent amount to build additional renewable generation capacity and procure batteries.

Gwede Mantashe, the energy minister, has warned that outages will persist until Eskom secures the necessary skills to navigate the crisis.

“If we don’t get that right, it is going to take us longer, because the level of experience in Eskom is very low,” he said in an interview last month. “You need to supplement that to deal with the idle units that are not giving us energy. We need energy from those units. They are not decommissioned, they are just idle.”