The data center infrastructure suppliers Pure Storage Inc. and Nutanix Inc. both sprung a surprise on Wall Street today, posting earnings and revenue that topped analysts’ expectations. However, the results failed to excite investors all that much, as both company’s shares stayed more or less flat after-hours.

Pure Storage has put together a string of impressive quarters over the past couple of years, and once again it managed to ease fears that the faltering economy might harm its prospects. The company reported a net loss of $787,000 for the third quarter, with earnings before certain costs such as stock compensation coming to 31 cents per share. Revenue came to $676.1 million, up 20% from a year earlier.

Both numbers beat Wall Street’s forecasts, with analysts targeting earnings of just 26 cents per share on revenue of $671.8 million.

Pure Storage Chairman and Chief Executive Charles Giancarlo (pictured, above) said a growing number of customers across the world are relying on his company to satisfy their mission-critical storage and management needs. “With the power of our unique Flash-optimized technology and differentiated business model, we look forward to managing increasingly more of their data storage requirements,” he said.

Pure Storage delivered some impressive numbers across the board, with its subscription services revenue rising 30% to $244.8 million. Annual recurring revenue from subscription services also rose by 30% to exceed $1 billion for the first time. In addition, the company reported remaining performance obligations of $1.6 billion, up 26% from a year earlier. RPO represents future obligations arising from contracts with customers, or in other words, the amount of cash the company is owed that has not yet been invoiced.

Analyst Steve McDowell of Moor Insights & Strategy told SiliconANGLE that while every major storage provider delivered revenue growth in the most recent quarter, Pure Storage once again outperformed the market, growing at almost twice the rate of its nearest competitor. He said the company’s success is due to three factors – a healthy market overall, a richer mix of products than its ever had, and strong financial discipline.

“Pure is profiting from smart product bets it’s placed over recent years,” McDowell explained. “Pure has one of the most modern all-flash portfolios in the industry and customers are responding to that. Its new high-end FlashArray XL is beating expectations, while its entry-level QLC-based products continue to sell very well.”

In addition, Pure Storage’s bet on Portworx, a data management platform for Kubernetes-based applications, is also paying off handsomely for the company, McDowell said. The company’s subscription revenue, which includes Portworx, now accounts for almost 30% of its overall business.

“I expect Pure will continue to do well, at least in the near- to mid-term,” the analyst continued. “Flash prices are way down across the industry, but I anticipate that Pure will take advantage of the glut in NAND flash to leverage its position as one of the only QLC-based flash vendors. I also believe it will further expand its market into traditional hard-disk near-line storage. Its competitors really can’t follow them there.”

Looking to the fourth quarter, Pure Storage said it’s eyeing revenue of $810 million, just below Wall Street’s forecast of $813.3 million. For the full year, it’s forecasting total revenue of $2.75 billion, which is in-line with the analyst’s consensus estimate. 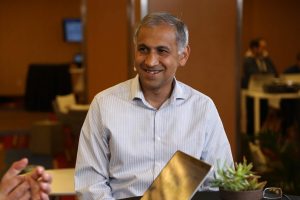 Nutanix delivered impressive results too, with first quarter earnings before certain costs coming to 3 cents per share, well ahead of Wall Street’s forecast of a 12 cent loss. Revenue for the period rose 15% to $433.6 million, comfortably ahead of the $413.1 million consensus estimate. All told, Nutanix posted a loss of $99.1 million, which was a big improvement on the $419.9 million loss it delivered one year earlier.

While Pure Storage is laser-focused on storage arrays, Nutanix sells a software-defined hyperconverged infrastructure or HCI stack that integrates compute, storage and networking components into a single appliance or cloud service.

Although it still sells physical gear, Nutanix has attempted to shift away from its hardware roots, putting more focus on its “hyperconvergence” software that can run on third-party servers and systems. At the same time, the company has also been urging customers to adopt its new subscription model.

Nutanix President and CEO Rajiv Ramaswami (pictured, adjacent) said the company’s solid performance, amid an uncertain macro backdrop, reflects the value that customers see in the Nutanix Cloud Platform and its subscription-based business model. “We also made important progress towards realizing our hybrid multicloud vision with the general availability of Nutanix Cloud Clusters (NC2) on Microsoft Azure and enhancements to our platform to accelerate the adoption of Kubernetes at scale in the enterprise,” he said.

Like Pure Storage, Nutanix reeled off a list of impressive numbers, saying its annual contract value billings rose 27% to $231.9 million. It also reported ARR of $1.28 billion, up 34% from a year ago. It ended the quarter with free cash flow of $45.8 million.

McDowell said Nutanix caught everyone by surprise with its top-line and bottom-line earnings beat and that there are several reasons why. “Nutanix is selling one of the industry’s best stacks for managing hybrid cloud infrastructure, and its products are resonating well with enterprise IT,” McDowell explained. “It’s also placing strong bets on the public cloud. While on-premises IT spending is down, cloud spending continues to grow and that’s good news for Nutanix.”

Nutanix is also doing very well on the customer acquisition front and landed some important deals that contributed to its success in the quarter. Its new customers included a major federal agency and a large colocation provider. “It’s these kinds of deals that can help take a good quarter and transform it into a great quarter, and that’s what happened here with Nutanix,” McDowell said.

Finally, the analyst said that Nutanix is no doubt benefiting from the ongoing uncertainty around the impact of Broadcom Inc.’s pending acquisition of VMware Inc. The latter company is a major rival to Nutanix, and McDowell said that a lot of customers are skittish about continuing their investments in it. This plays into Nutanix’s hands, McDowell said, because it’s offerings are the natural alternative to VMware’s for many customers.

“Beyond growing its revenue, Nutanix is managing its bottom-line very well,” McDowell continued. “This is an organization that’s demonstrating good fiscal control. That’s exactly what’s needed in a market where IT spending overall is shaky.”

Nutanix offered a strong forecast too. For the current quarter ending in January, the company said it expects to deliver revenue of between $460 million and $470 million, well ahead of Wall Street’s target of $450.7 million. However, there could be some hiccups in the year ahead. For fiscal 2023 as a whole, Nutanix said it expects revenue of between $1.77 billion and $1.78 billion, which is just below Wall Street’s consensus estimate of $1.79 billion.

In the after-hours trading session, Pure Storage’s stock chalked up a 2% gain, while Nutanix’s shares dipped by less than a percentage point.