Tencent pledged to distribute the majority of its shares in meal delivery giant Meituan to investors, as China’s social media leader ramps up plans to reduce its extensive holdings across the world’s largest internet industry.

Tencent, which had announced plans to pare its stake in online retailer JD.com Inc., will dole out more than 958 million Class B stock in Meituan as a special dividend to existing shareholders. Tencent announced the move as it reported revenue shrank for the second straight quarter, underscoring the extent to which China’s worsening economy is hurting its biggest private corporations.

The decision marks another milestone in Tencent’s evolution from a sprawling internet empire with investments across much of China’s tech sphere to a more focused, cost-conscious gaming and social media operator. Its exit from JD and now much of Meituan comes after Xi Jinping imposed a series of withering curbs on the industry in 2021, including restrictions on play time and content.

Tencent executives had previously denied the company intended to sell its slice of Meituan, China’s leader in food delivery. The stock to be paid out, valued at about HK$155 billion ($19.8 billion), marks about 91% of Tencent’s Class B stake. Apart from JD and Meituan, Tencent also owns part of Kuaishou Technology, Didi Global Inc. and Bilibili Inc. And this year it sold about $3 billion worth of shares in Southeast Asia’s biggest internet company, Sea Ltd.

“Tencent giving away Meituan shares looks like a move to become regulatory compliant,” said Shawn Yang, an analyst with Blue Lotus Capital Advisors who has a buy rating on Tencent. “They won’t be in the same camp anymore but will be normal business partners going forward,” which reduces Tencent’s influence over the online commerce industry.

The move marks another retreat for Tencent, which along with Alibaba Group held sway over much of China’s tech sector.

Beijing has punished the country’s tech giants for anti-competitive behavior, including maintaining closed ecosystems that favor certain companies at the expense of others. The JD and Meituan dividends may buy goodwill with the government, which has pushed for the dismantling of such barriers and for tech firms to share the wealth.

Chinese tech shares recovered some of their losses this month, after the Communist Party began pulling back from its Covid-Zero playbook and offered more incentives to the Biden administration to work together. Xi’s shift on those fronts, coupled with perceptions of a renewed focus on reviving the world’s No. 2 economy, is spurring speculation that Beijing will begin to unshackle the private sector.

“The overall regulatory environment is trending towards a more supportive environment,” President Martin Lau told analysts on a conference call. 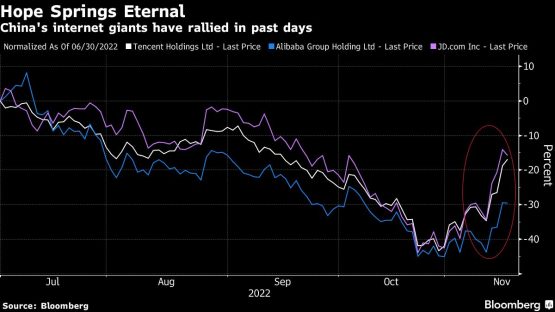 China’s internet industry has made peace with a new era of sedate growth, shifting focus to enhancing profitability from chasing market share after Beijing’s crackdown wiped more than $1 trillion off their combined market value in 2021. While regulators have eased up on their campaign against tech, the once-freewheeling sector remains saddled by weak consumer spending and strict Covid restrictions.

Tencent’s revenue fell 2% to 140.1 billion yuan ($19.8 billion) in the September quarter, missing the average projection for 141.4 billion yuan. Net income came in at 39.9 billion yuan, versus the 25.2 billion yuan estimate.

In its core video gaming operations, Tencent has yet to find its next big hit to take up the slack from Honor of Kings, first released in 2015. Domestic gaming sales dropped 7% for the third quarter while the overseas division grew 3%. Only one Tencent game has been approved for domestic launch since Beijing’s censors resumed handing out licences in April.

Tencent is co-developing a new mobile game with Capcom Co. for the Japanese studio’s popular Monster Hunter franchise, in a bid by China’s premier game developer to remake itself for the international market.

The company’s appetite for foreign gaming assets is increasing at a time when it is divesting other assets and spending more judiciously at home. In September, the Shenzhen outfit spent roughly $300 million to double its stake in Ubisoft Entertainment SA.

While investors have cheered Tencent’s recent cost-cutting, some are clamoring for faster fixes to its top line than long-term gaming bets. Attention is on growth at its WeChat short video feed, which has yet to fully monetize its content with e-commerce and advertising offerings. Executives said advertising revenue generated by the new feature will surpass 1 billion yuan in the fourth quarter.