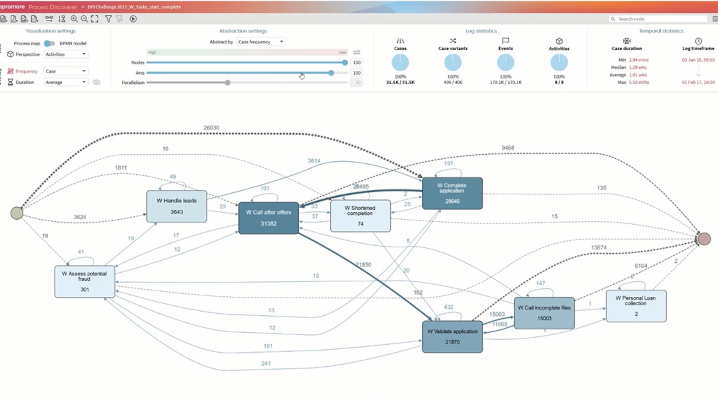 Apromore raised the capital through a Series B investment that was announced today. Salesforce Inc. and Germany-based enterprise software maker GBTEC Software Consulting AG led the investment. According to Apromore, it has raised a total of $23 million from investors since launch.

Melbourne, Australia-based Apromore provides a process mining platform that companies use to make their business operations more efficient. The startup says that its platform is used by multiple large enterprises including two of the four largest banks in Australia.

Apromore’s platform can map out how a company’s employees perform day-to-day business activities such as onboarding new customers. After analyzing a business workflow, the platform can determine what tasks it involves. Apromore also gleans other details, such as the amount of time those tasks require and the software products that employees use to carry them out.

The platform visualizes the data that it gleans in graphs. According to Apromore, a company’s executives can consult the graphs to identify areas where operational efficiency could be improved.

A retailer could use the startup’s platform to map out the tasks involved in purchasing merchandise from suppliers. The platform can highlight inefficiencies, such as cases where the procurement process is not carried out in accordance with company best practices. Users can also access information about how the efficiency with which a task is carried out changes over time.

As part of its feature set, Apromore provides a so-called process simulation tool. The tool allows business users to test ways that a company workflow can be changed to make it more efficient. A procurement team, for example, could use the tool to find ways of reducing the number of steps involved in ordering merchandise from suppliers.

“As businesses look for solutions to improve profitability, customer experience and efficient delivery to combat rising costs, process mining is providing a competitive advantage of increased agility against ongoing economic disruption,” said Apromore Chief Executive Officer Marcello La Rosa, who is also a professor of information systems at the University of Melbourne.

Apromore will use the proceeds from its newly announced Series B round to develop more features for its platform. The development effort will place a particular emphasis on adding analytics and artificial intelligence capabilities. In parallel, the company plans to grow its international presence.

The company announced the funding round alongside a new partnership with Salesforce. The startup has built an integration that will make it easier to stream business data stored in Salesforce applications to its process mining platform. According to Apromore, access to additional business data will make it easier for customers to find ways of increasing operational efficiency.

The startup is competing in a fast-growing market. According to research from Gartner Inc., enterprise spending on process mining software will reach $2.3 billion by 2025 thanks to a compound annual growth rate of 33%. By 2028, the process mining market is expected to be worth $7.8 billion annually.