West Texas Intermediate fell below $78 a barrel, hitting the lowest intraday level since January, as a Bloomberg gauge of the US currency rallied to an all-time high. US benchmark crude collapsed more than 7% last week for a fourth straight weekly drop, the longest losing run this year. 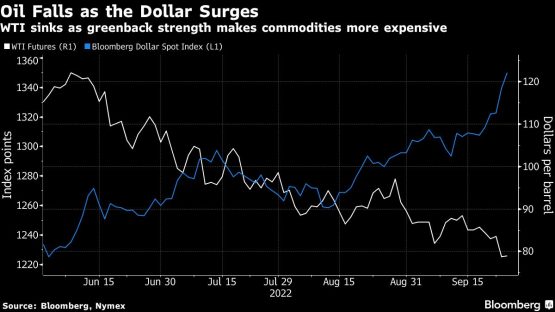 Crude is on track for its first quarterly slump in more than two years as central banks including the Federal Reserve raise interest rates aggressively, hurting the outlook for energy demand and sapping investors’ appetite for risk. The Fed’s tightening has helped to drive the US dollar to a record, making commodities priced in the currency more expensive for overseas buyers.

The slump in prices may induce the Organisation of Petroleum Exporting Countries and its allies to consider intervening to stem the slide, either verbally or by announcing a reduction in output. Earlier this month, OPEC+ announced a token supply cut, and said members would monitor the market.

The upward pressure on the dollar “is a wrecking ball for commodities,” Gary Ross, the chief executive officer of Black Gold Investors LLC, told a conference in Singapore, flagging scope for OPEC cuts. “The supply-demand balance has caught up and, as we’re entering the fourth quarter, we’re building stocks.”

Crude traders were also keeping tabs on the path of Tropical Storm Ian, which is expected to strengthen into a hurricane this week as it approaches the Florida mainland. At present, forecasters are struggling to pinpoint where it will make landfall, possibly anywhere from the Panhandle to Tampa Bay.

Widely watched time spreads have narrowed, suggesting an easing of near-term tightness. Brent’s prompt spread — the gap between its two nearest contracts — was at $1.06 a barrel, down from almost $2 a month ago.

“At current levels, it appears the market is now pricing-in the typical impact of a deep recession,” Australia & New Zealand Banking Group Ltd. said in a note. “The sell-off could see OPEC intervene again.”