Oil fell as an industry report showed a rise in US crude stockpiles and investors fretted about weaker demand amid slowing growth.

West Texas Intermediate retreated below $85 a barrel after rising 0.9% on Tuesday. The American Petroleum Institute reported US inventories expanded by about 4.5 million barrels last week, according to people familiar with the figures. Government data will follow later Wednesday, with the breakdown coming amid heightened concern about product supplies including diesel. 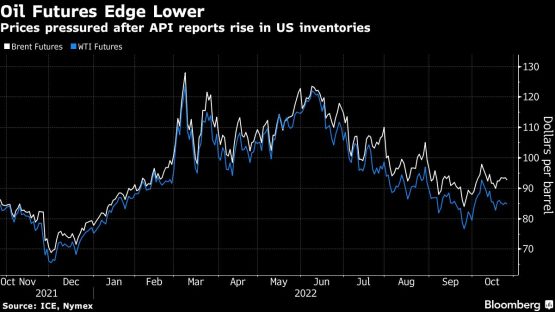 While crude remains on course for its first monthly gain since May as the Organisation of Petroleum Exporting Countries and its allies including Moscow agreed to cut output, prices are still well down from the peak following Russia’s invasion of Ukraine. Investors are concerned about slowing demand as central banks raise interest rates to curb inflation. In addition, traders are focused on tightened European Union curbs on Russian flows from December.

“There’s tightness heading into the winter, especially when the market is bracing for the EU embargo against Russian oil very soon,” said Sean Lim, an oil-and-gas analyst at RHB Investment Bank Bhd. “But then again, if you ask me whether oil prices will spike in response to that in December, they may not, because Russia has already been rerouting their exports elsewhere.”

To help rein in crude and gasoline prices the Biden administration has released millions of barrels of crude from the nation’s strategic reserves. On Tuesday, Saudi Arabia’s energy minister criticized major importers for trying to tame prices by selling down their inventories, while defending OPEC+’s supply cut.

Signs of macro-economic weakness continue to emerge, darkening the outlook for energy usage. The economy in China, the top crude importer, slowed in October, according to a Bloomberg index of early indicators, signaling last month’s pickup wasn’t enough to change the country’s grim economic picture.

Widely-watched oil market time spreads have weakened this week, while remaining in a bullish, backwardated structure. Brent’s prompt spread — the difference between the two nearest contracts — was $1.70 a barrel in backwardation, compared with more than $2 a barrel on Monday.