Oil slipped after a two-day rally as lingering concerns over a global slowdown and a stronger dollar offset a tightening supply outlook.

While crude is on track for a weekly gain, futures are still heading for the first quarterly decline in more than two years as fears of a potential recession hang over the market. The dollar has spiked this month and is trading near a record, making commodities priced in the US currency less attractive to investors. 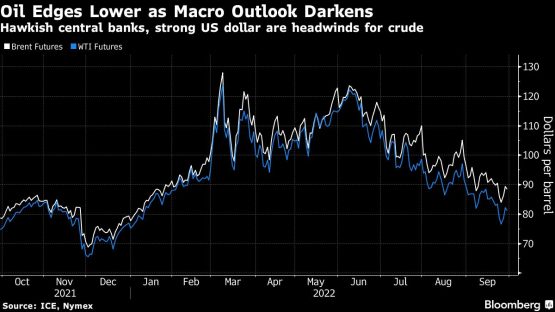 “Crude prices remain in a precarious and volatile rebalancing phase,” said Vandana Hari, the founder of Vanda Insights in Singapore. “The continued lack of liquidity will exacerbate the price swings.”

The European Union announced a new round of sanctions against Russia that would ban European companies from shipping the OPEC+ producer’s oil to third countries above an internationally set price cap. Tensions have escalated after natural gas pipelines were damaged in suspected sabotage.

US crude stockpiles unexpectedly declined last week, while gasoline supplies also fell, according to data from the Energy Information Administration on Wednesday. Inventories at the storage hub at Cushing, Oklahoma, rose.

There’s also growing calls for the Organization of Petroleum Exporting Countries and its allies to slash production at its meeting next week to stem the decline in oil prices. The chorus of industry voices include UBS Group AG, JPMorgan Chase & Co. and RBC Capital Markets LLC, with industry consultant FGE predicting the market could dip into contango without intervention.