Oil fell at the start of the week with investors weighing the prospect for more Iranian supply as the outlook for economic growth weakens.

Brent futures lost around 1% to trade below $96 a barrel after rising over the previous three sessions. President Joe Biden spoke Sunday with leaders from France, Germany and the UK about reviving a nuclear deal with Iran, which could lead to a surge in supply from the OPEC producer.

Crude has given up all of the gains since Russia’s invasion of Ukraine in late February as fears over an economic downturn filtered through the oil market. Time spreads are signaling easing concerns over tight supply, while a stronger dollar has also added to headwinds for commodities. 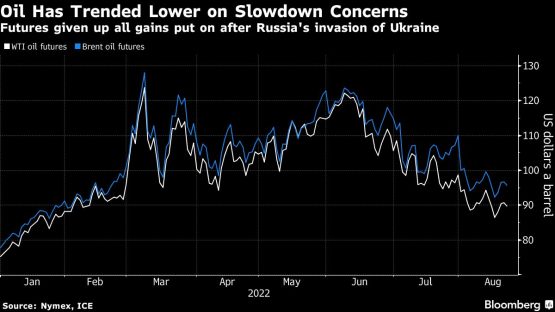 Biden and his European allies discussed “ongoing negotiations” toward a nuclear agreement, including “the need to strengthen support for partners in the Middle East region,” according to a US summary of the call released Sunday. Iran submitted its response on August 15 to a framework circulated by the EU for a deal, which the EU took as constructive.

“The global balance for the remainder of the year is not as tight as many were expecting, with Russian supply holding up well,” said Warren Patterson, head of commodities strategy for ING Groep NV. “While it may take several months for Iran to get production back to pre-sanction levels in the event of a deal, in the short term, they should still be able to boost exports by relying on storage.”

The difference between prompt Brent futures and the second month contract — a measure of the market’s reading of near term supply and demand tightness — fell to 51 cents per barrel on Monday, compared with $4.82 a month ago.