Oil rebounded as a key North American pipeline remained shut and on the potential boost to demand from the easing of virus curbs in China.

West Texas Intermediate rose toward $72 a barrel after collapsing 11% last week. TC Energy Corp. is continuing recovery efforts at its shuttered Keystone pipeline – which links fields in Canada to refiners on the US Gulf Coast — and a date for a restart hasn’t yet been set, according to a statement on Sunday.

China has been moving away from its Covid Zero policy following a wave of protests, even as the virus continues to spread, offering prospects for a revival in energy consumption in the world’s largest crude importer. That’s helping to offset concerns that the US may be headed for a recession after the Federal Reserve aggressively hiked interest rates to quell inflation. 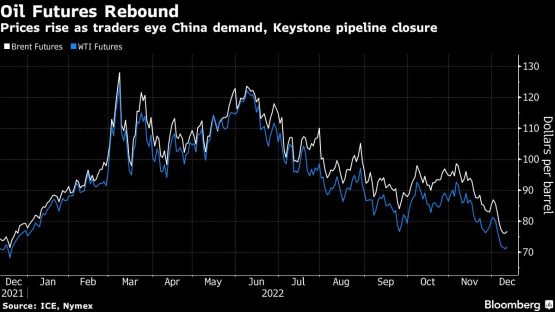 Crude remains on track for its first back-to-back quarterly decline since mid-2019 as the demand outlook sours and thin liquidity exacerbates price swings into the year-end. Investors are also weighing the fallout from the $60-a-barrel price cap imposed by the Group of Seven and European Union on Russian crude to punish Moscow for the Ukraine invasion. On Friday, Russian President Vladimir Putin said that the country may cut production in response to the move, with a decree to be issued on the matter within the coming days.

The risk of a production cut from Russia could potentially add “fresh support to the market ahead of what looks like a challenging 2023,” said Charu Chanana, market strategist at Saxo Capital Markets Pte in Singapore. Supply worries may keep prices elevated despite the risk of lower demand, she said.

Following the imposition of the price limit and related curbs, a backlog of tankers waiting to haul oil through Turkey’s vital shipping straits built up amid a dispute over insurance cover. That now appears to be clearing, with a port agent tally on Sunday showing 19 tankers waiting to pass through the Bosphorus and Dardanelles straits, down from a total of 27 on Saturday.

Key spreads for WTI and Brent continue to hold in contango, indicating ample near-term supply. Brent’s prompt spread — the difference between the two nearest contracts — was 39 cents a barrel in contango, compared with $1.58 a barrel in the opposite backwardated structure about a month ago.