Oil headed for the biggest weekly gain since early March as OPEC+ put the market on course for further tightening ahead of winter.

West Texas Intermediate was near $90 a barrel on Friday, with futures up almost 12% for the week. Benchmark Brent topped $95 for the first time since mid-September. Time spreads were signaling supply scarcity even before the producer alliance announced its biggest output cut since the start of the pandemic, a move that’s set to squeeze the market even more.

The tightening outlook halted the slide in oil prices, which have been weighed down by concerns over a global economic slowdown and aggressive rate hikes by central banks. Russia also reiterated this week that it won’t sell oil to countries that adopt a US-led price cap, adding to supply uncertainty. 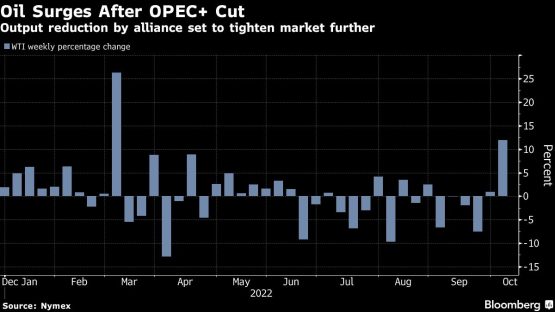 Aside from the rally in crude prices, diesel has been another pillar of oil market strength this week, as traders brace for scarce supply in the coming winter. Prices in Europe and the US are currently trading above $160 a barrel.

“With OPEC news now fading out, the thing to watch is diesel markets,” said Keshav Lohiya, founder of consultant Oilytics.

The Organisation of Petroleum Exporting Countries and its allies plan to reduce output by 2 million barrels a day from November. However, Saudi Arabia’s oil minister said the real-world cut will likely be around 1 million to 1.1 million because some members are pumping well below their quotas.

The market is looking “pretty tight” from the fourth quarter onward, said James Whistler, managing director of Vanir Global Markets Pte. in Singapore. The cuts by OPEC+ leave the market vulnerable ahead of European sanctions on Russian oil imports and the likely return of Chinese demand at year-end.