West Texas Intermediate traded near $82 a barrel after collapsing by almost 6% to the lowest level since January. Several Chinese centers face anti-virus lockdowns, including the megacity of Chengdu, imperiling energy demand in the world’s biggest importer. 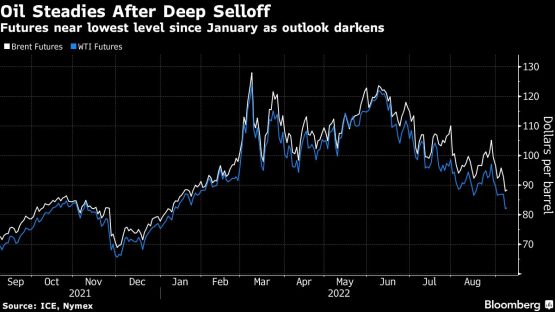 Crude’s tumble in recent days has seen it break out of a trading range it had been in for much of the summer. Futures have been trading below key moving averages and forming bearish technical patterns that have compounded the recent selloff. Alongside that, key timespreads are pointing to a softer market than they were several months ago.

Oil’s deep loss on Wednesday came despite several supportive market factors. Russian President Vladimir Putin said the country would not supply energy to any nations that backed a planned US-led price cap on the nation’s crude. In addition, the Energy Information Administration raised its outlook for global oil demand, while also cutting the forecast for US supply.

Widely-watched time spreads have been volatile recently. The prompt spread for US benchmark WTI closed at its weakest level since January on Wednesday. The market’s backwardation has slumped from almost $4 in July to just 33 cents now.

In its latest market snapshot, the American Petroleum Institute reported nationwide US crude stockpiles expanded by 3.6 million barrels last week, although holdings at the key storage hub in Cushing, Oklahoma, dropped, according to people familiar with the figures. Further insight will come later Thursday from the EIA’s weekly breakdown of supply and demand.