Oil extended gains after an industry report pointed to another big decline in US crude inventories, adding to signs of market tightness.

West Texas Intermediate futures rose near $89 a barrel after closing around 2% higher in the previous session. The American Petroleum Institute reported crude stockpiles shrunk by 6.53 million barrels last week, according to people familiar with the data. A weaker dollar provided additional support, making commodities priced in the currency more attractive to investors.

The market will be keenly watching an interest-rate decision from the Federal Reserve later Wednesday to gauge the outlook for demand. The central bank is expected to raise rates by 75 basis points for the fourth time in a row. 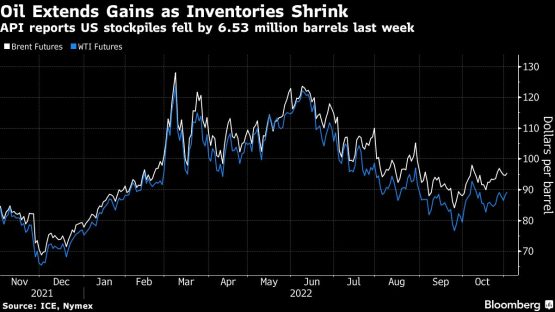 Crude has rebounded this quarter after a decision by the OPEC+ alliance to slash production from November, halting a prolonged slide that was prompted by economic slowdown concerns. The cartel’s cuts will be followed by European Union sanctions on Russian oil, further clouding the supply outlook.

The Organization of Petroleum Exporting Countries held output steady last month after earlier agreeing to make a token reduction of 100,000 barrels a day. But with many members already lagging their quotas, few needed to do any actual cutting, and total output was well below the group’s target.

Speculation that China is searching for a path out of Covid Zero helped to drive oil and other markets higher on Tuesday, although a Chinese foreign ministry spokesman said he was unaware of the plan.

Brent remains in a bullish backwardation pattern, signaling market tightness. The prompt time spread for the global benchmark — the difference between the two nearest contracts — was $1.86 a barrel in backwardation on Wednesday, compared with $1.90 a week earlier.