Oil edged higher as investors weighed a tightening outlook for energy supply against persistent concerns over a global economic slowdown.

West Texas Intermediate futures rose toward $89 a barrel after falling 2% on Thursday. The OPEC+ alliance will make sizable cuts to output from this month, which will be followed by European Union sanctions on Russian crude flows from December. A global diesel shortage is also adding to supply woes.

Oil is on track for a second weekly gain, but futures have lost almost a third of their value since June as slowdown concerns weighed on demand. Crude has swung in recent sessions along with broader market trends and shifts in the dollar. Lackluster trading volumes have also had an impact. 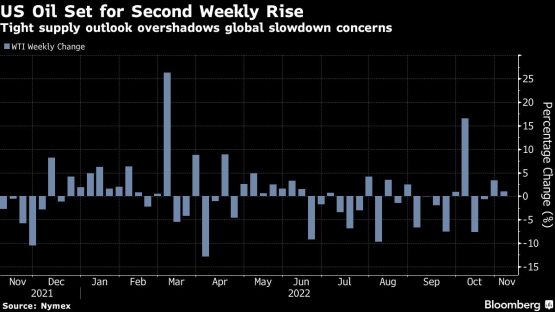 European Central Bank President Christine Lagarde said that a “mild recession” was possible following more rate hikes from the Federal Reserve and the Bank of England. Saudi Arabia has also trimmed its oil prices for December sales to Asia, highlighting some concern over the outlook for demand. The kingdom sells most of its crude under long-term contracts to the region.

“The downside risks to global economic conditions, along with a stronger US dollar on a tighter policy outlook, will continue to be headwinds,” said Yeap Jun Rong, a market strategist with IG Asia Pte in Singapore.

China looks set to receive an influx of seaborne crude in the coming weeks as cargoes bought before its latest Covid shutdowns head for the nation’s ports. Exporter countries loaded almost 9.3 million barrels a day of oil for China in October, tanker-tracking data compiled by Bloomberg show.

The US and its partners agreed to set a price cap on Russian crude at a fixed level, but it’s not yet clear at what level it will be set, according to officials familiar with the matter. The mechanism has been championed by the US and is designed to cut Moscow’s energy revenues after its invasion of Ukraine.

The “overstated” discounts of Russian crude against benchmark prices means the US and its allies may need to set a higher price cap for it to be effective, according to Goldman Sachs Group Inc. Meanwhile, the UK Treasury said it will prohibit the provision of insurance, brokerage and shipping services when EU sanctions take effect unless Russian oil is bought at or below the cap.