Oil retreated on concern that a further round of severe US monetary tightening to combat inflation will hurt demand, and an industry report pointed to a hefty increase in American commercial stockpiles.

West Texas Intermediate fell below $87 a barrel after a volatile session on Tuesday, when prices were buffeted by data showing elevated US inflation, and a possible Biden administration plan to refill strategic reserves. Crude’s latest drop came with losses in equities and other commodities including copper. 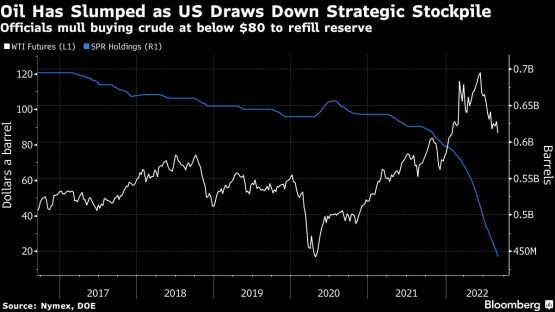 Oil hit the lowest since January earlier this month as traders attempted to price in a possible global slowdown, tighter monetary policy, and lower energy demand. The hotter-than-expected US inflation figures have set the scene for another round of aggressive hikes from the Federal Reserve, as well as further gains in the dollar, which is already near a record. There’s growing concern that the US central bank may tip the world’s largest economy into recession.

“The US plans to refill its strategic stockpiles may drive expectations that there could be a floor for prices,” said Yeap Jun Rong, market strategist at IG Asia Pte. But the guiding narrative may be the demand-outlook story, with “the CPI data providing the go-ahead for tighter monetary policy,” he said.

The industry-funded American Petroleum Institute reported US commercial crude stockpiles expanded by 6 million barrels last week, according to people familiar with the figures. Government data due Wednesday will provide greater clarity. The holdings — which are separate from the Strategic Petroleum Reserve — jumped by 8.8 million barrels in the previous period.

US strategic reserves have plunged this year, hitting the lowest in almost 40 years, after President Joe Biden ordered the release of 180 million barrels to counter the inflationary fallout spurred by Russia’s invasion of Ukraine. Now, the US may start restocking the emergency reserve when crude dips below $80, people familiar with the matter said.

Widely-watched oil market time spreads have been volatile. Brent’s prompt spread — the difference between its two nearest contracts — was 92 cents a barrel in backwardation. That compares with 79 cents a week ago, but a figure above $2 as recently as last month.

In Europe, possible energy rationing has exacerbated demand concerns as Moscow clamps down on supplies of gas. Later Wednesday, European Commission President Ursula von der Leyen is set to lay out a raft of proposals to stem the crisis in a speech before the European Parliament. Traders will also review a monthly outlook from the International Energy Agency.