West Texas Intermediate rose above $94 a barrel, reversing an early decline, after gaining 2.5% last week. In Libya, clashes between militias in the capital left at least 23 dead, sparking fears of further upheaval in the OPEC nation that may again put oil shipments at risk just as Europe reels from an energy crisis.

Iran, meanwhile, said exchanges with the US over a European Union proposal to revive a nuclear deal will drag on into next month, undercutting speculation that an agreement paving the way for increased oil flows was imminent. 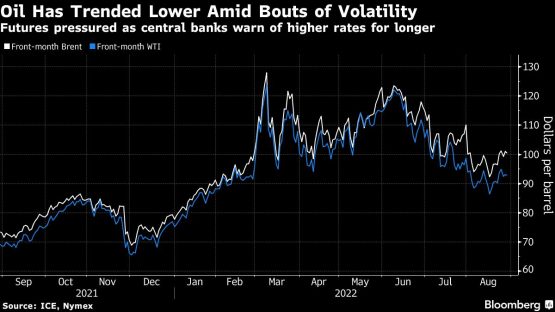 Crude is on course for a third straight monthly drop on concern global growth will slow as central banks tighten policy aggressively, hurting consumption. Federal Reserve Chair Jerome Powell has warned of the need for higher rates, while a top European Central Bank official said that there was “little choice” but to press on even if the region’s economy tipped into recession.

To counter the weakness, Saudi Arabia raised the possibility last week that the Organisation of Petroleum Exporting Countries and its allies could cut output, drawing support from fellow members. Separately, loadings from an export terminal for Kazakhstan crude have seen interruptions.

Widely-watched market time spreads suggests growing concern over near-term tightness. Brent’s prompt spread — the difference between its front-month and second-month contracts — was $1.72 a barrel in the bullish backwardation structure, compared with 67 cents a week ago.

In a bullish note on commodities, Goldman Sachs Group Inc. said that crude oil had scope to push higher, especially amid shortages of other energy raw materials including natural gas.

“With oil the commodity of last resort in an era of severe energy shortages, we believe the pullback in the entire oil complex provides an attractive entry point for long-only investments,” analysts including Sabine Schels wrote.