Oil fell after an industry report showed a large build in US crude stockpiles amid a downbeat outlook for monetary policy.

West Texas Intermediate dropped below $75 a barrel after adding around 3% over the past four sessions. US crude stockpiles rose by 14.9 million barrels last week, the American Petroleum Institute reported, according to people familiar with the data. If confirmed by the Energy Information Administration later Wednesday, it would be the largest increase since February 2021. 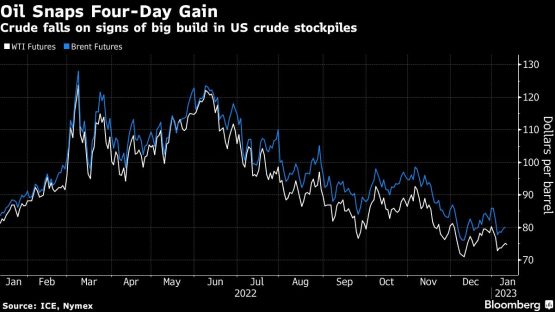 Crude has faced a rocky start to the year, slumping almost 10% in the first two sessions on signs large parts of the global economy are heading into recession, before trending higher. Investors are keenly watching for clues on the outlook for US monetary policy, with JPMorgan Chase & Co.’s Chief Executive Officer Jamie Dimon saying rates may have to move higher than 5%.

“The impact of the bearish API will likely be transient,” said Vandana Hari, founder of Vanda Insights. The market will eventually shift its focus back to the economic outlook and moves by the Federal Reserve, she added.