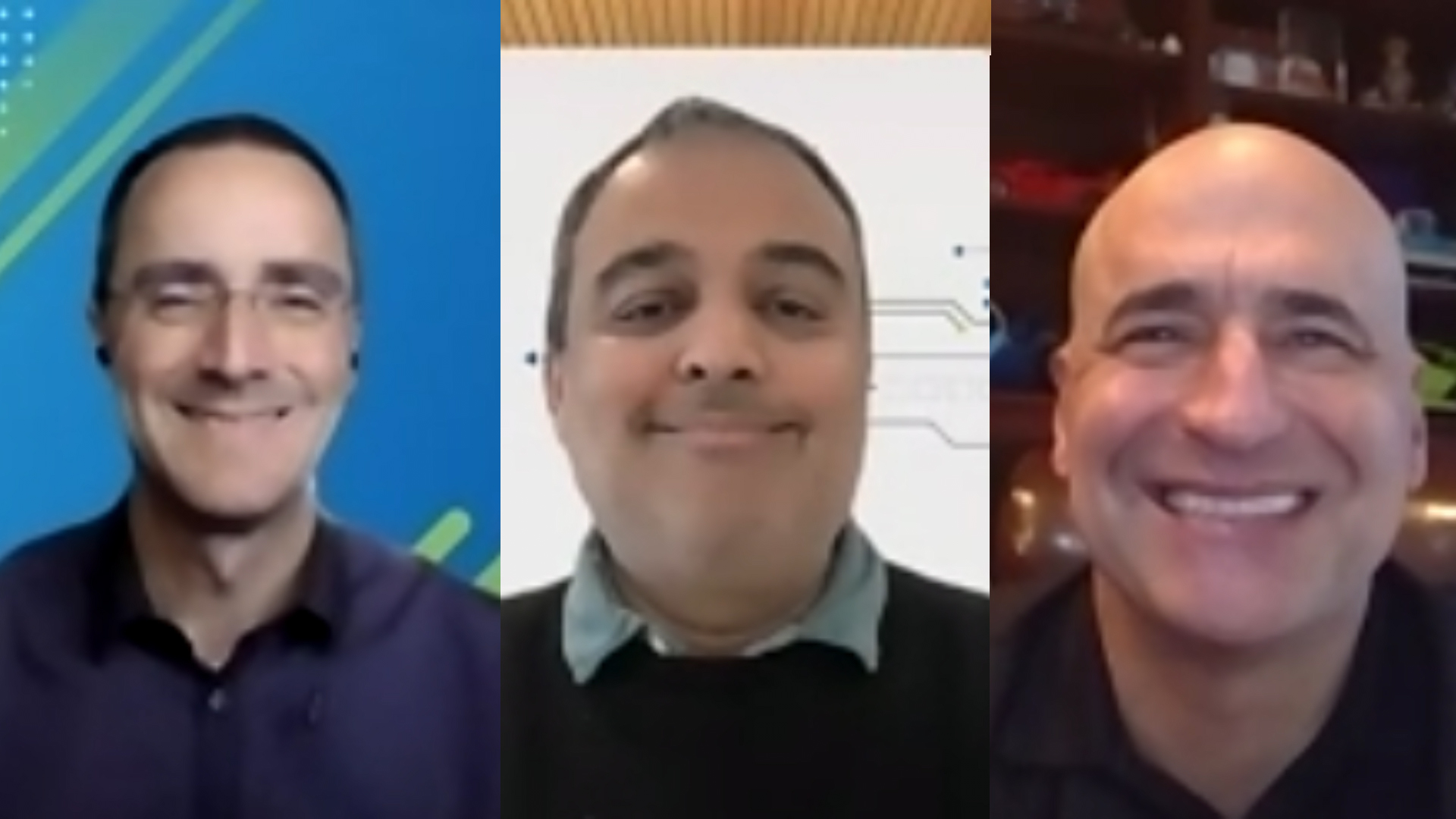 In the post-pandemic era, enterprises are looking for elasticity, agility and the ability to drive innovation without upfront investments. Given that organizations have an on-premises footprint for regulatory or data reasons, hybrid cloud has emerged as something of an ideal operating model.

Nutanix is meeting this need with its Nutanix Cloud Clusters on Azure. The solution makes it simple to extend on-prem Nutanix to any Microsoft Azure region by moving applications and workloads without refactoring or retooling, according to Thomas Cornely (pictured, left), senior vice president of product management at Nutanix Inc.

“What we do is we extend the Nutanix operating model to workloads running in Azure using the same core stack that you’re running on-premises,” he stated. “So once you have a cluster deployed in NC2 on Azure, it’s going to look like the same cluster that you might be running at the edge or in your own data center using the same tools, using the same admin.”

In a separate interview, Alvaro Celis, vice president of global ISV commercial solutions at Microsoft, and Michal Lesiczka, vice president of the cloud and database partner ecosystem at Nutanix, spoke with theCUBE industry analyst Lisa Martin. They discussed the partnership between Nutanix and Microsoft and why hybrid cloud is a perfect fit for enhanced scalability, flexibility and app modernization. (* Disclosure below.)

Not only does NC2 on Azure simplify cloud migration, but it also provides Elastic Disaster Recovery. As a result, the ultimate vision is to make the cloud journey easy without rewriting applications, as well as extending some of the cloud capabilities down to the on-prem infrastructure, according to Cornely.

“We’re doing on-premises IT disaster recovery and something that we refer to as Elastic Disaster Recovery, being able to go and actually configure a secondary site to protect your on-premises workloads,” he explained. “With investments that we’ve done together with Azure Arc, for example, we’re really extending the Azure control plane down onto on-premise Nutanix clusters and bringing the capabilities that provides to the Nutanix customer, as well as various Azure services like our data services and Azure SQL Server.”

NC2 on Azure takes the challenge of “remodeling” away because applications are shifted to the cloud as they are. This makes the cloud journey easier, given that enterprises are able to access Azure services from the same application running on an NC2 cluster, according to Keri.

“One of the things that you have done really well with the NC2 on Azure is that NC2 is not something that sits by Azure’s side; it’s fully integrated into the Azure Fabric, especially the software-defined networking, SDN piece,” he said. “Your management claim looks the same, your high-performance notes, the NVMe notes, they look the same.”

Despite the complexity of hybrid cloud, NC2 on Azure makes it simpler because a similar operating model is deployed at the edge, on-prem and in the public cloud. Furthermore, a lift-and-shift approach is employed, according to Cornely.

“We allow teams to go and basically have a solution that allows you to go and take any application running on-premises and move it as-is to any Azure region where NC2 is available,” he added.

Even though public cloud has a bunch of inherent advantages, such as being able to innovate without significant upfront costs, Lockard believes retaining some workloads on-prem is being driven by sovereignty and data-gravity reasons. As a result, the need for hybrid cloud becomes more pressing.

“There is a trend toward public cloud, but you know not everything can go to the cloud, especially right away,” he pointed out. “So, really, hybrid is the way to achieve the best of both worlds, really to kind of leverage the assets and investments that customers have on-premises but also take advantage of the cloud for bursting, originality or expansion, especially coming out of the pandemic.”

Since NC2 is an infrastructure layer, Keri believes it enhances and makes security and management easier through the company’s Prism solution, which provides an automated control plane that uses machine learning to support predictive analytics and automated data movement. Furthermore, it tackles the network complexity, because users are provided with a virtual private cloud.

“Down the road, if you have a containerized application, you’ll actually be able to take it from on-prem and run it on NC2,” Keri stated. “The NC2 offering itself is an infrastructure-level offering. And the trick is that the storage that you’re used to, the high-performance storage that defines Nutanix to begin with, the hypervisor that you’re used to, all of them are available to you on NC2 in Azure the same way that they used to do on-prem.”

Since the business context has significantly changed, especially in the post-pandemic era, enterprises have become conscious about cost and efficiency. NC2 on Azure accelerates the cloud journey, given that organizations have different amounts of pressure, priorities and imperatives, according to Celis.

“The Nutanix Cloud Clusters are often the fastest way on which customers will be able to do that journey into the cloud, because it’s very consistent with environments that they already know and use on-premise,” he noted. “And once they go into the cloud, then they have all the benefits of scale, agility, resiliency, security and cost benefits that they’re looking for.”

The foundation of the partnership between Nutanix and Microsoft has been customer centricity, Lesiczka pointed out, adding that this has been instrumental in enabling the hybrid cloud concept to see the light of day.

“We actually entered a partnership a couple years ago, so we’ve been working on this solution for quite a while,” he said. “But really our ultimate goal from day one was really to make our customers’ journeys to hybrid cloud simpler and faster. So really for both companies, I think our goal is being that trusted partner for our customers in their innovation journey.”

By combining the advanced capabilities of Nutanix and Microsoft, Lesiczka believes the silos between networking and computed storage are broken down. As a result, operations get simplified and Nutanix’s hyperconverged infrastructure has been instrumental in the materialization of hybrid cloud.

“If you look at Azure at Microsoft, they’re truly best-in-class cloud infrastructure with cutting-edge services and innovation and really global scale,” Lesiczka explained. “So when you think about those two combinations, that’s really powerful for customers to be able to take their applications — whether they’re on-prem, in the cloud or even at the edge — and really combining all those various hybrid scenarios.”

Value addition and delivering consistency is at the heart of the Nutanix-Microsoft partnership, according to Celis. As a result, scalability, performance, resilience and elasticity are benefits when utilizing hybrid cloud.

“When you see two companies coming together with the mission of empowering customers and with the customer at the center and trying to solve real problems — in this case, how to drive hybrid cloud and what is the best approach for them — opening more opportunities is extremely inspiring,” Celis said. “So how do we combine our capabilities between Nutanix and Microsoft to be sure that that hybrid cloud journey that everyone is going to take can be simplified?”

Since the North Star of the partnership is to continue to make it easy for enterprises to adopt, migrate and modernize their applications, Lesiczka believes NC2 on Azure has set the ball rolling. In fact, the preview of NC2 on Azure was oversubscribed, indicating a high demand for the product. Working from the customers backwards has also been an ideal stepping stone.

“Like you mentioned, we’ve had a great preview, oversubscribed,” Lesiczka noted. “We had lots of, not only customers, but also partners battle-testing the solution. We’ve been working with partners like TCS and Citrix, where they share the same goal as Microsoft and Nutanix. So they’re going to be leveraging NC2 on Azure to really provide those hybrid cloud experiences for their solutions, building on top of the work that we’ve done together.”

And make sure to watch the complete “Accelerate Hybrid Cloud With Nutanix & Microsoft” event video below:

(* Disclosure: TheCUBE is a paid media partner for the “Accelerate Hybrid Cloud With Nutanix & Microsoft” event. Neither Nutanix Inc., the sponsor for theCUBE’s event coverage, nor other sponsors have editorial control over content on theCUBE or SiliconANGLE.)