South African inflation decelerated for the first time since January, a slowdown that’s unlikely to sway the central bank from delivering an unprecedented second consecutive 75 basis-point hike in interest rates.

Read: Rand on back foot before inflation numbers, Fed

The headline consumer-price index rose 7.6% from a year earlier, compared with 7.8% in July, Pretoria-based Statistics South Africa said Wednesday in a statement on its website. That matched the median estimate of 17 economists in a Bloomberg survey. 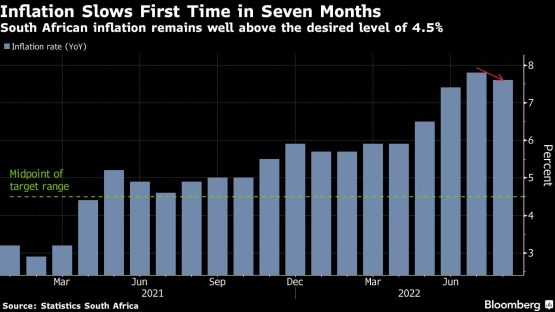 More monetary policy tightening remains in the cards because the central bank wants to keep inflation expectations anchored and alleviate pressure on the rand. Governor Lesetja Kganyago said in a September 8 interview that the monetary policy committee must do whatever it takes to curb price growth until it’s under control and on a downward trajectory toward the midpoint of its inflation-target band.

All 21 economists polled by Bloomberg expect the MPC to hike by three-quarters of a percentage point to 6.25% on Thursday. Forward-rate agreements, used to speculate on borrowing costs, show traders are pricing in 68 basis points of tightening this week. That compares with expectations of three-quarter percentage increase before Wednesday’s inflation data.

At the last meeting in July, the implied policy rate path of the central bank’s quarterly projection model, which the MPC uses as a guide, indicated the benchmark will be at 5.61% by year-end.

Rate setters have already raised the key rate by a cumulative 200 basis points since November.

Core inflation, which excludes volatile items like food and fuel, slowed to 4.4%., from a five-year high of 4.6%, which could show that underlying prices pressures are cooling.

Though international oil prices and global food costs appear to be easing, the domestic inflation outlook remains clouded by the risk of a de-anchoring in price growth expectations.

Previous spikes in food and fuel costs and increased pressure on the rand from accelerated monetary tightening by the US — including a 75 basis-point rate hike expected on Wednesday — may lead to second-round wage and price effects.

Yields on South African benchmark bonds reversed an earlier rise after the release of the data, falling four basis points from closing levels to 10.96%. The rand narrowed losses and was at 0.2% weaker at R17.72 per dollar by 10:43 a.m. in Johannesburg.