The update provides various fixes and refinements to the OS, improving the Start menu, dumping some Windows 8-era user interface designs and adding some new touchscreen capabilities. On the security side, there’s a new password security feature. Although there’s nothing new that might be considered truly revolutionary, the update helps polish up the new user experience that was introduced with Windows 11.

On the productivity side, one of the most noticeable upgrades might be the new drag-and-drop function in the taskbar, which allows users to right-click and pull applications and documents into, and out of, the bar.

Touchscreen device users may well appreciate the new Snap Layouts feature, which is designed to assist those who might have too many tabs open in Edge, and therefore struggle to use them productively. According to Microsoft Executive Vice President and Chief Product Officer Panos Panay, Snap layouts (pictured below) have been a “game-changer for multitasking” because they allow users to optimize their view when working with multiple applications and documents. With the update, Snap layouts become more versatile, with better touch navigation, plus the ability to snap multiple browser tabs in the Edge browser, Panay said. 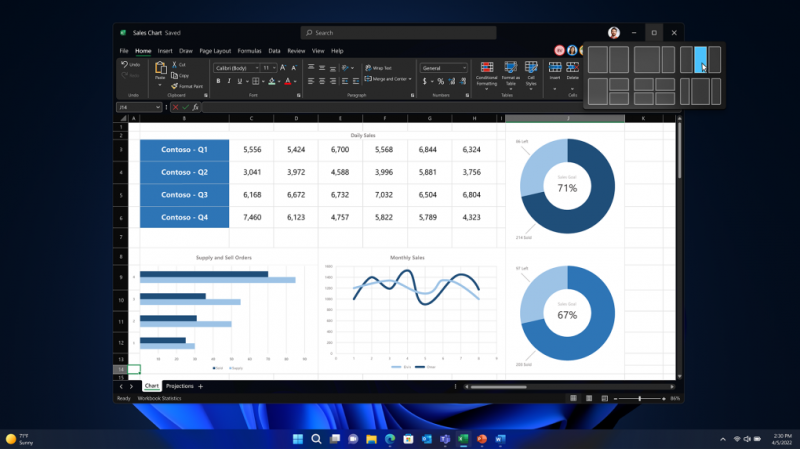 Other improvements include the ability to control apps and functions with finger swipes. It’s now possible to open the Start menu simply by swiping up with one finger, and then close it by swiping down. Users can also switch between pinned apps and a full app list by swiping from left to right, while swiping up gives access to Quick Actions.

Video callers will also benefit from the updates to Windows Studio Effects, which include new filters to eliminate background noise, and Automatic Framing, which helps the camera to better frame a user and follow them if they move up or down during meetings. Eye Contact is another new feature that helps to make it look as if the user is always looking at the camera, even if they’re actually looking at some notes below the monitor. The new Live Captions, meanwhile, help improve accessibility.

Busy people will surely appreciate the new “Do Not Disturb” feature (below) that can be found within the Settings menu. This turns off all notifications — even the most critical ones — so users can double down and focus on whatever task they’re trying to get done. The feature is flexible too, so users could allow some types of notifications, such as Slack messages, while blocking everything else. 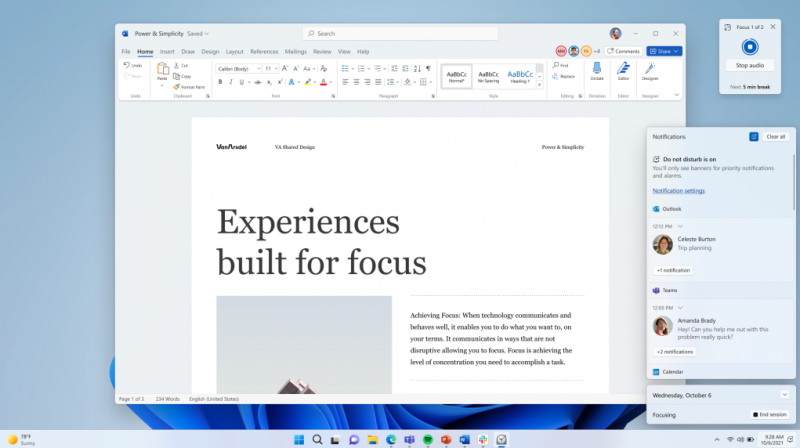 On the security side, some of the upgrades are hardware based. For instance, Windows 11 devices that run Intel Corp. 8th-generation chipsets and higher will have virtualization-based security and hypervisor-protected code integrity enabled by default. “The two technologies protect you from both common malware and ransomware, as well as more sophisticated attacks,” Microsoft 365 General Manager Wangui McKelvey wrote in a blog post.

Windows Credential Guard has also been enabled by default. This feature relies on virtualization-based security to isolate secrets so they can only be accessed via privileged system software, McKelvey explained, making it harder for attackers to compromise the system.

Defender SmartScreen gains a new password protection feature too. When Windows detects that the user is typing in their Microsoft password, Defender SmartScreen will analyze where that password is being entered, the company explained. It will check the application’s integrity, what websites the app is connected to, what network connections are open and more.

Microsoft said the new update doesn’t change Windows 11’s system requirements, so there’s no need to worry that older systems will struggle with it. At the same time, the upgrade doesn’t extend support to less powerful devices either.

As is usually the case with Microsoft, the upgrade will be rolled out gradually to all users so it can monitor for any problems. Those who don’t see the upgrade yet can use the Windows 11 Installation Assistant to grab it manually if they desire. For those still running Windows 10, Microsoft said it will release a new version of that OS, called Windows 10 version 22H2, later this month. That’s in line with its promise to keep supporting Windows 10 until October 2025.